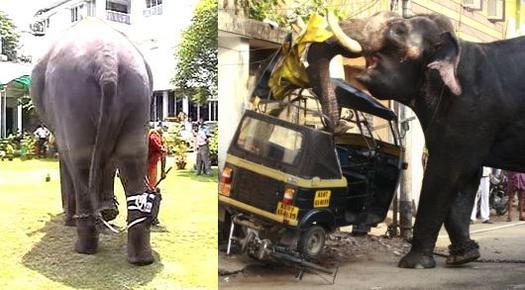 Elephants running rampant in your neighborhood, squashing cars and knocking over power lines?  Really?  Where the heck do you live?  Regardless, that should be no problem if you’ve loaded up on the Violent Elephant Control Gear, a remotely-controlled device that immobilizes elephants on a rampage.

Designed by Zachariah Matthew from India, the restraining gadget offers a more humane alternative to  sedating the beasts with loaded darts.  It’s especially useful for circuses, zoos and places where elephants are paraded during festivals, all of which could see some serious casualties after one of the normally even-tempered pachyderms runs amok.  Of course, if you’ve been taken from your home and used as a sideshow for everyone’s amusement, you’d probably be pissed off too.  Just saying.

The Violent Elephant Control Gear is a 16-pound box that’s tied to the rear leg of the animal.  When Dumbo starts to get agitated (“Why are all those fat, ugly humans looking at me?”), a human controller can simply press a button from a remote console (up to 25 meters away) to trigger it.  Once set in motion, a high-pressure power cord will shoot out of the box, tying up the elephant’s other rear leg, allowing trainers to come in and, hopefully, calm them down.  If the elephant trips and falls on you, though, tough luck.  Tsk…tsk…

Matthew has held several successful tests of the contraption in his hometown of Kerala, where elephants are used as beasts of burden to help with farmwork.  He’s gearing it up for a commercial launch soon with a planned price of around $664 (30,000 Rupees).