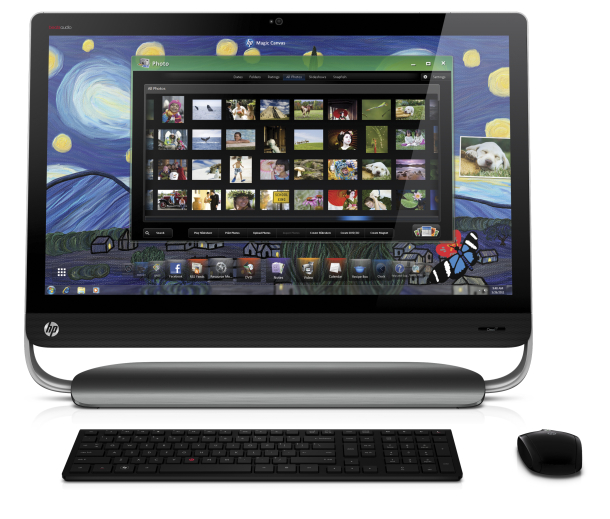 Over two years have passed since Apple introduced a 27-inch iMac.  If you were a PC user waiting for an equivalent of that behemoth, you’ve been waiting a long time.  Looks like 2012 will be your year, though, as HP has finally announced one: the HP Omni27 PC.

Unlike many newer AIO PCs, this one isn’t a touchscreen.  Despite that, however, HP is throwing in their Magic Canvas UI (formerly TouchSmart), which has been redesigned to play well with good old mouse-and-keyboard controls.

The generous screen, of course, is the star here, boasting edge-to-edge glass paneling and up to 25 degrees of tilting.  Resolution isn’t quite up to par with the 27-inch iMac, though, as it only manages 1,920 x 1,080 pixels (compared to the iMac’s 2,560 x 1,440 pixels).  While that may put off graphic designers from picking this up, this should make a neat machine for many home users (maybe even less-demanding graphic designers).

Like other PCs, it comes with multiple CPU options (Core i3 to Core i7), two memory options (4GB/8GB), your choice of graphic cards (AMD and Nvidia) and up to 2TB of hard disk space.  Multimedia features include an HDMI-in (yep, it can be your console gaming TV, too), Beats Audio hardware, optional TV tuner and optional Blu-ray drive.

If you like your computer screens big, then the HP Omni27 PC is exactly what you’d want sitting on that empty desk. No pricing or release dates yet, but HP will be showing it off at CES 2012 next week.