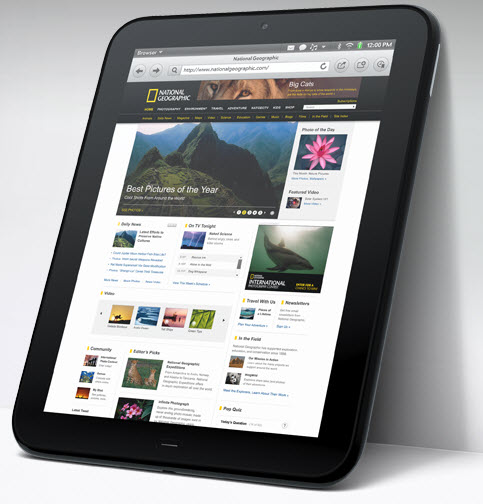 We all knew a webOS tablet is coming.  Now, it’s here.  Called the HP TouchPad, it brings the same impressive webOS experience in a bigger and squint-free form factor.

Dimensions are what you’d expect from a standard 10-inch tablet: 13.7 mm thick, 1.6 lbs. and a 9.7-inch capacitive touchscreen.   The display can show 1024 x 768 pixels of resolution, so you can watch your 720p videos right on the slate (which they needed to do, since it doesn’t have an HDMI out).

Specs aren’t that far off from other tablets announced for release this year.  You get a front-facing 1.3 megapixel camera for video calls (no camera in the rear), the usual selection of sensors (light sensor, accelerometer, compass and gyroscope), WiFi, stereo Bluetooth, optional 3G and aGPS, a choice of storage capacities (16GB and 32GB), a 6,300 mAh battery, onboard speakers (Beats Audio), a 3.5mm jack and a microUSB connector.  Commanding the action is a dual core 1.2Ghz Snapdragon APQ8060 processor.

As for the UI, it’s basically a blown-up version of the webOS interface, complete with all the features you can find on the smartphone version.  It will come with built-in Flash support, four virtual keyboard sizes and a Kindle app, among other things.

Pricing has not been announced, although the HP Touchpad will likely compete with the iPad on price points.   Release is expected for mid-2011.