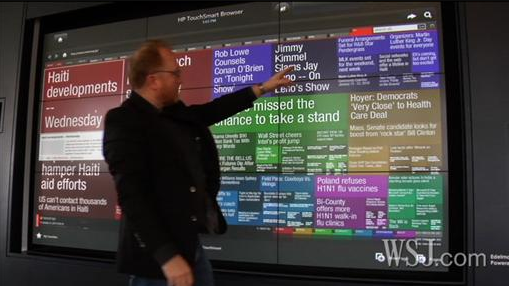 Contrary to what its name suggests, the Wall of Touch isn’t actually a giant touchscreen.  Instead, it’s an oversized implementation of Hewlett Packard’s TouchSmart technology, which uses built-in optical cameras and magnetic strips to create a virtual touch interface.

As you can see from the photo, it’s one giant computer display – perfect for sending people into a veritable state of awe.  It’s driven by an HP Z800 workstation, so it should work like any regular TouchSmart computer, allowing you to interact with the content using your fingers (which you can keep a couple inches away so you don’t leave tons of fingerprints on it).

The Wall of Touch uses up to nine 1080p displays, each one measuring between 43 to 46 inches.   Apart from the simulated touch inputs, it can also interface with usual peripherals such as mouse and keyboards. Why not just go with one large panel?   According to HP, a single screen would likely compromise resolution for something of this size, apart from requiring a more complex setup.

Currently, HP has installed the system on a by-request basis, in places such as the National Basketball Association headquarters and the Continental Airlines counter at  the Houston airport.    It costs anywhere from a few thousand dollars to over $100,000, depending on the features the companies want to come with the setup.

When can you buy one?  According to HP, they’re preparing a handful of Wall of Touch systems now, in anticipation of requests from their existing customer base.  They’re not too keen in making it a mainstream, off-the-shelf product yet, however, as they’d still like to gauge potential long-term interest.