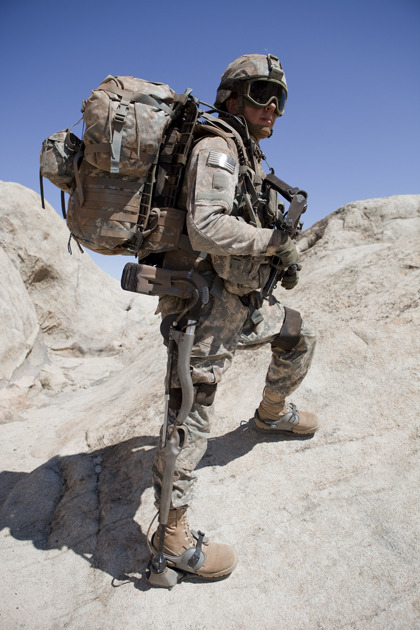 Always wondered how super soldiers of the future will be made?  I’ve always had my money on some mad scientist inventing an injectable Hulk-creating steroid, but the Human Universal Load Carrier (HULC), an exoskeleton meant to bestow its wearer with extraordinary strength, isn’t that bad either.

Created by Lockheed Martin, the wearable structure can give troops heightened strength and greater endurance, keeping them less prone to injuries during long stretches of activity in the field.  According to the company, the suit allows soldiers to do “deep squats, crawls, and upper-body lifting with minimal human exertion,” allowing them to save their strength for better use during actual encounters.

HULC is an untethered anthropomorphic exoskeleton, giving its wearer full maneuverability, while boosting the ability to take on heavy loads.  Hydraulic actuated, it uses onboard batteries to power the suit, which transfers all the weight down to its lower extremities.  It can manage to carry weight up to 200 lbs across the back, without putting any strain on the wearer.

The US Army is currently testing the suit, with trials being conducted at the Natick Soldier Systems Center.  Both soldier performance and energy levels will be measured, along with how long it will take each personnel to get accustomed to having it on.

With a capacity of only 200 lbs, the HULC is far from the real Hulk when it comes to showing off beastly strength.  The dumb, green monster can probably lift that much using only his pinkie.  Regardless, carrying a scooter on your back while being able to moonwalk comfortably does sound mighty awesome.   Now, if only soldiers moonwalked…