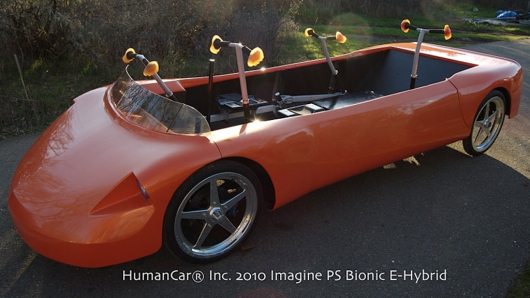 The Humancar Imagine PS won’t win any points for good looks or speed, but that’s not what it’s meant for.  Instead, it promises a cleaner, greener ride, as well as a leaner, healthier driver, allowing you to help power it by rowing.

Normally, you’d hop on a bike if you wanted to get some exercise on the way to the grocery a few blocks away.  Not anymore.  This novel ride can get you a similar workout, all while allowing you to share cabin space with up to four people.

What if you’re too tired to row?  Not a problem, either.  The HumanCar is actually an electric vehicle that can power directly from the mains.  You can opt to lean back and let the electric powertrain push it along, or help it out a bit by making rowing motions that it converts into trickles for the battery.  It comes with four rowing handlebars, so everyone in the car chip in. 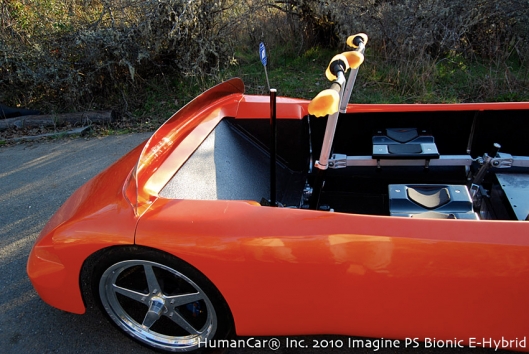 Classified as a Neighborhood Electric Vehicle (NEV), speed is electronically-limited to 25 mph, although it can actually run at up to 62 mph.  Yes, you should be able to tweak it if you ever do get one.   It uses an adaptive chassis that can take a variety of power systems, batteries, controls and motors.  The idea is to keep the car usable even after technology improves.

The vehicle comes with an onboard computer, which operates off trigger buttons on the center brake handle.   It controls functions such as regenerative power (off the brakes), starting and cruise control.  The car doesn’t have a steering wheel, but uses a “Body Steering” system, which reads where the driver leans in order to turn.  According to HumanCar Inc. CEO Chuck Greenwood, this is more a intuitive solution than conventional steering systems.  Other features include a touchscreen display with GPS and biometric data logging, an onboard sound system, numerous communications devices and a foldout ragtop roof.

Originally slated for Earth Day 2008, the Humancar Imagine PS has been delayed for a couple of years now.  This year, though, they’re saying “the wait is over” and that interested parties can already place reservations.  The company is waiting for 800 orders at $15,000 apiece before going into production, though.