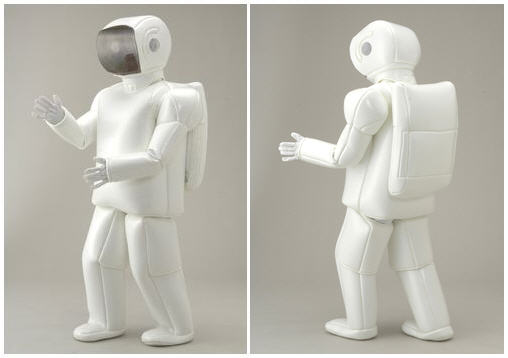 I can understand it when people want to dress up like superheroes.  Gearing up to look like Asimo, however, is just a little too strange.  Why in the world would anyone want to parade around as the mascot of a Japanese car company?

Of course, since there’s not a Honda logo in sight, it’s not really Asimo – just a really, really close look-alike.  That mascot isn’t even all that popular either, so people will more likely think you’re just pretending to be some random humanoid robot or a spaceman who really, really likes white.

At any rate, this is a cool get-up to have on tap, in case you want to cosplay as something other than your usual comic book or movie character.  Since the full outfit is literally blank, you can even decorate it any way you like.  You can stitch a patch of an American flag there on the costume’s arm, for instance, and pretend that you’re an astronaut when girls come over to your house (assuming girls even want to go near your mom’s basement – just kidding);  you can also hire a maid and offer them extra to clean your room dressed as a robot with an apron, finally allowing you to realize your Jetsons fantasy.

The Asimo-like humanoid robot costume is only available in Japan, but looks nice enough to warrant bringing everywhere else.  It’s yours for $400.