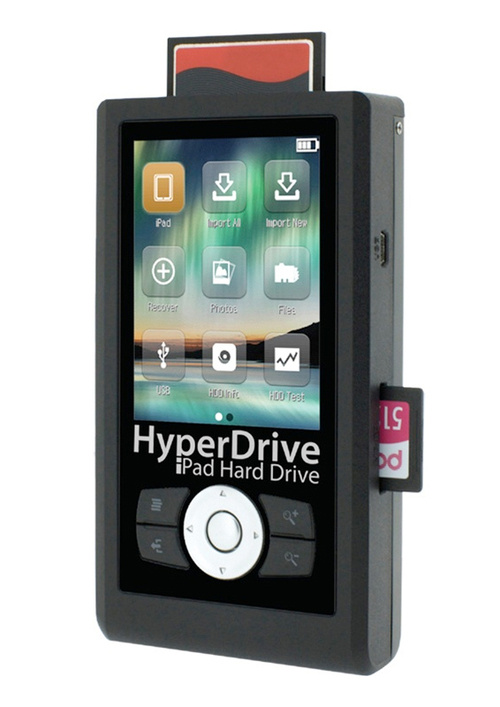 For those using the iPad as an accessory gadget, the limited storage space may not be that big of an issue.   If you’re hoping it can replace your netbook or laptop, though, you’ll probably require gigabytes of extra storage beyond what’s already built into the tablet.  The HyperDrive, an external hard disk with features to spare, is exactly what you need.

Going around the Camera Connection Kit’s 32GB limit, it arranges the storage into iPad-readable 32GB folders.  Since you aren’t likely to have any files spanning over 32GB, it shouldn’t pose any problem, so you can treat it like a bunch of 32GB HDDs, all tethered to your tablet at the exact same time.

The HyperDrive goes beyond being a hard disk enclosure, though, adding tons of features right on the case itself.  Armed with 3.2-inch LCD, you can explore the drive’s contents, view JPEG and RAW images (full screens, slideshows, previews), and perform advanced file operations (copy, paste, delete, create folders and more) right on the case.  It has two 12-in-1 SD card readers, allowing you to access storage cards either from the built-in screen or on a connected device (it can work with iPads and regular computers).

It comes with built-in drives between 120GB and 750GB.  You can also use the enclosure with any 2.5-inch SATA drive, with support for storage units beyond 750GB (according to the website).  Onboard rechargeable battery allows for easy removal and replacement.