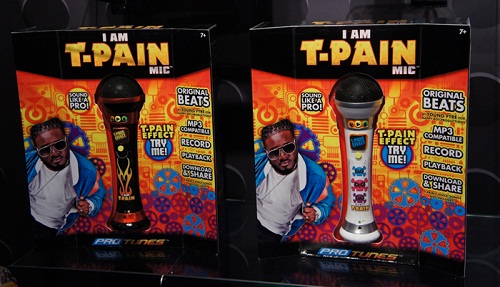 T-Pain’s autotuned voice might be grating for some.  That doesn’t make his songs or the fact that he’s embracing it with pride any less awesome, though.  Now, you can record everything that comes out of your mouth with a perpetual autotune too using this I Am T-Pain Mic.

Launched by Creative Designs International (a division of Jakks Pacific), the toy basically copies features from the best-selling T-Pain iPhone app and puts it in a mic you can carry around (let’s face it — singing into a phone isn’t half as fun as carrying a mic along).  That means, you can sing into it and record your voice, which it will then modify into a finished MP3 with the T-Pain Effect in full swing.

The I Am T-Pain Mic is styled like a regular microphone, except it’s decked in a variety of colorful designs and graphics (hey, it’s meant for kids, after all).  It comes with three demo beats and several soundbites from Nappy Boy’s Young Frye, so you can turn your freestyle lyrics into actual songs.  The device comes with speakers built in, as well, giving you the chance to make your friends listen to autotuned recordings right on the spot.

As with the app, you can connect the mic to your computer and download the autotuned recordings, which you can then share online or enjoy at your own leisure.  While I haven’t seen it in action, I have a feeling the whole thing is just as cheesy as you can imagine it to be.  And that happens to be awesome.

Expect the I Am T-Pain Mic to hit retail stores in the Fall, priced at $40.  It will likely launch with a pair of T-Pain Speakers, though, I’m not sure how that one will work (hopefully, it will automagically pitch-correct everything that pipes out from it — that will be fantastic).