i-Sobot: The Robotic Friend You Always Wanted Is Here 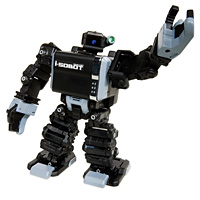 Those of us with the ‘geek-bone’ have wondered for years when the first lifelike robot would come along and allow us to interact, tell it to do stuff and entertain us with its antics.  Well, we do not have to wait any longer because the I-Sobot has arrived – and it holds the Guinness Record for the smallest humanoid robot in production. I-Sobot is only 6 and a half inches tall, but has the most expansive array of functions and personality we’ve ever seen on a non-living being.  But don’t worry Asimov fans – I-Sobot has no plans to take over the world – at least – not yet.

I-Sobot is the first we have seen who’s movement is surprisingly un-robot-like.  His movements are graceful and fluid, with some sort of mechanism making him lifelike whenever he does anything thanks to seventeen custom designed actuators and a gyro sensor (no, we don’t know what that means either). Oh, and he does a lot. You control I-Sobot with a remote bearing an LCD screen – that looks a little bit like a starship nav panel, and with it you can make I-Sobot perform over 200 actions.  He can kung-fu kick, play air guitar, dance, hula, do push-ups, somersaults, animal impersonations and lots more, including real toughies like re-enacting western gunfights and acting drunk.  Plus, he’ll respond to your applause, and beg you for mercy in case you threaten him with the trash compactor after a particularly bad performance. 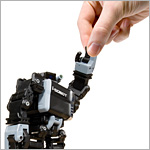 I-Sobot isn’t just a silent performer either – he’s got lots of sound effects and can say over 200 words and phrases.  You can even get him to play your MP3s and if no one is around you can make him dance and pretend he’s a contestant on American Idol. He’ll respond to your voice too, answering your questions with random, but appropriate responses. Since he’s small enough to take to the office, school or anywhere you want to show him off – we think I-Sobot will be your constant companion wherever you go.  Just don’t forget his remote.