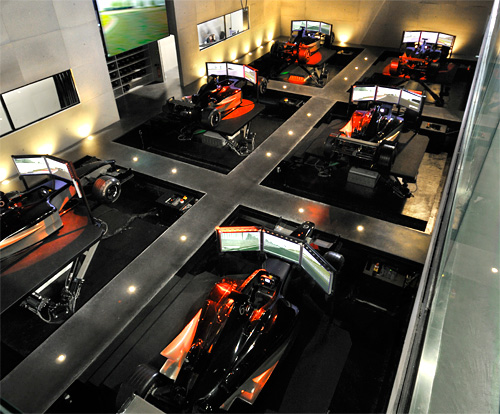 Watching a floor filled with arcade boxes is pretty amazing.  Looking at one littered with high-end racing simulators is even more grand.  Just take a look at the I-WAY, an exclusive virtual racing facility situated in Lyon, France.

Designed by Cyrille Druart, the building offers a veritable retreat beyond the video game simulations on tap.  Inside, the three-level structure houses a fitness center, spa, bar, restaurant, shops, conference rooms, lounges and an office space. 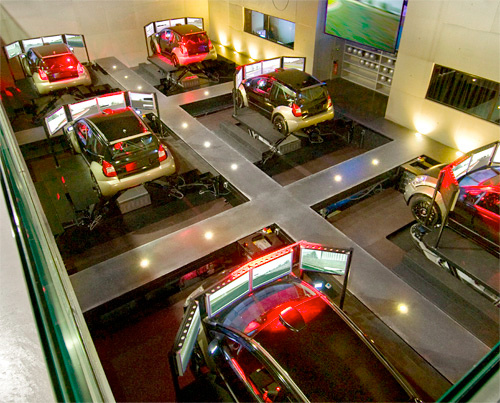 I-WAY’s main attraction, of course, are the racing rigs.  Equipped with a total of 18 driving simulators with six-axis  movements and real vehicle bodies, it divides the playing area into three zones.  Formula 1 features six F1 cars with simulated 850bhp/19,000rpm engines,  Endurance zone gets six virtual Pescarolo cars and Rally/Touring  lets you wax crazy on six Citroen S2 1600.  We’re not sure what consoles or computers they’re using for the likely proprietary games, but it’s meant to be experienced across four large displays that cover the driver’s entire periphery.

Upscale arcades like these aren’t new and they all ended up in  a bust, largely because of the high costs for racing games that just don’t have the universal appeal to draw a wide variety of people in.  We’re guessing that’s why, since the facility’s launch in 2008,  there’s a strong effort here to appeal to corporate groups (thus, the office spaces and meeting rooms), rather than kids looking to beat another high score.