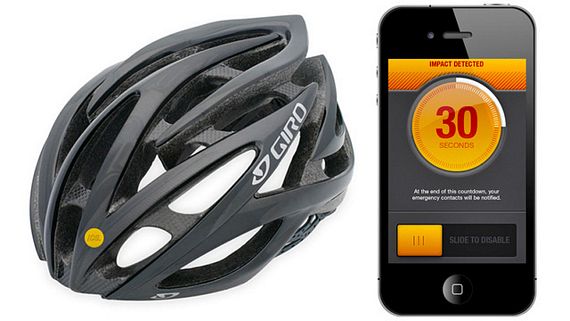 Accidents while doing extreme sports are bad enough.  Having an accident with no one else around to even call for help is just plain horrible — you can, literally, end up immobile while lying on a cliff till eternity (or the zombie apocalypse, whichever comes first). That might change soon with the ICEdot, a sensor that can detect accidents and help you call for help.

Designed to attach to helmets, it’s a tiny yellow dot that can detect impact and sudden motion using built-in accelerometers.  When it identifies movement consistent with accidents (it combines rotational inertia, speed, force and other factors), it will pair with your smartphone over Bluetooth and send data to an app, which will then send an SMS containing vital information (like time of the accident, GPS coordinates and the like) to numbers in your list of emergency contacts.

Since the ICEdot acts based on what the sensor picks up, there are likelihoods of false positives being detected (like if it’s just a light fall or if you’re just headbanging because some dude on a truck was playing the corniest 90s speed metal you ever heard).  While sending an SMS to your mom about you getting in an accident during a skiing trip might sound a little funny, it’s really isn’t.  That’s why the app doesn’t outright send out a text — instead, it merely sounds out an alarm and initiates a countdown, so you can pick up your phone to shut the procedure down if necessary.

The ICEdot is slated for release next year, priced at $200 for the sensor and app combo.