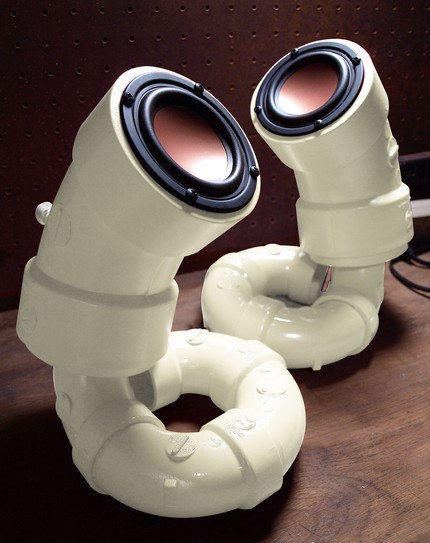 We’re not sure how well PVC pipes will sound as speaker bodies, but these Ikyaudio Sea Cucumbers Audio Speakers sure look way sexier than the usual boxes you can grab off electronic store shelves.   At least, they’re as sexy as one-eyed giant caterpillars can get (which happen to be right up there with Megan Fox and Brooklyn Decker – no, really).

Built by Etsy seller Ikumagoo, the hand-made speakers mimic the elongated shape of sea cucumbers (thus, the name) and actually look like robot-like alien creatures right out of a sci-fi movie.  Designed for desktop use, they sure add a heaping of style few work desk accessories can pull off on their own.

The Ikyaudio Sea Cucumbers Audio Speakers use cleverly-joined sections of PVC pipes for the body, hand-painted with a high gloss lacquer finish.  Each one is equipped with three-inch magnesium/aluminum alloy drivers in the head, along with a hole at the end of the tail acting as a bass port.

Since the speakers are unpowered, you’ll need to pair them with an amplifier for a louder sound using the three-way binding ports along the back.  Creator Ikumagoo claims they make for “a very good sound stage, lots of low end bass for a small speaker.”

You can get the Ikyaudio Sea Cucumbers Audio Speakers for $199 a pair.  If you don’t own a spare amp, you can also order them bundled with a mini-amp, but you’ll have to get in touch for the pricing.  Custom colors are available.