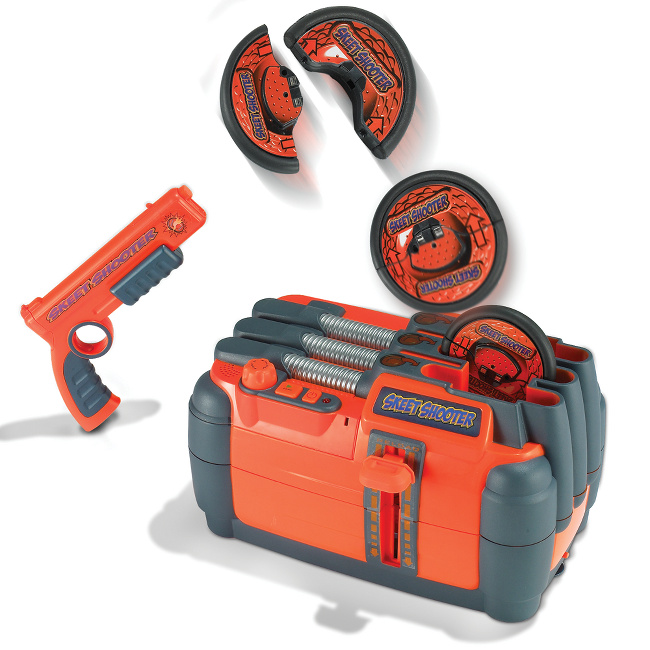 Everyone needs time away from the gaming console.  Unless you go crazy when you don’t spend your time shooting stuff, of course.  To keep your sanity while keeping the TV off, play with this instead: the Live Action Infrared Skeet Shoot.

Designed for indoor use, you don’t load up a shotgun for this skeet shooting game.  Instead, you arm yourself with a plastic infrared pistol that you can fire at discs hurled at a maximum height of seven feet.  When you connect on a target, the disc breaks in two while suspended in the air, making for realistic impact.

The Live Action Infrared Skeet Shoot is made up of three main components: a trap to hurl the discs into the air, the gun and the flying targets.  You can program the trap to launch the targets at varying speeds, allowing it to offer a more difficult challenge once you’ve found your groove.

Three discs come with the set, all of which can be quickly reassembled after “breaking” for another round.  Oh yeah, the gun comes with a realistic reloading sound every time you pump it, just so you don’t miss the vivid sound effects from your first-person shooting games too much.

You’ll need to arm the gun with three AA batteries and the trap with four C-types.  Once that’s done, you’re ready for competitive shooting all by your lonesome.  The  Live Action Infrared Skeet Shoot is available for $49.95.