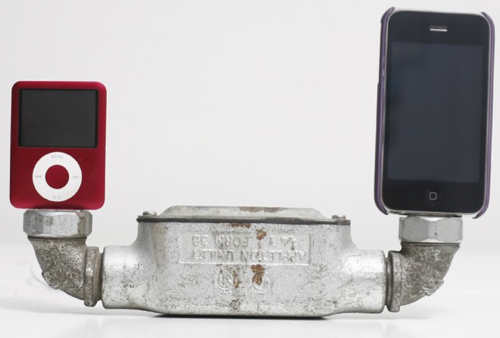 Want an iPod dock you can use as a jarring weapon? The Industrial Double iPod Dock, which is made from used steel pipes, should serve you well.

Seriously, though, if I accidentally leave this lying in a park bench, some homeless dude will probably pick it up and take it to a junk yard. Because it’s literally scrap plumbing materials outfitted with dual iPod docks and, if it does anything else (we assume it’s supposed to), some electronics inside. Made from “parts found while sifting through bins of rusty old parts at the second hand hardware store,” the seller recommends it as “a really great engagement or wedding present.”  With a straight face, I assume. Wow. Unless it’s Mario or Luigi (or Mario AND Luigi, lol) getting married, I’ll say that’s a bad idea.

The Industrial Double iPod Dock is actually a rather nice take on a gadget for propping your music player up. Sure, a water pipe is far from sleek home decor, but it does make for a nice piece on a plumbing office workdesk. Or when you plan to beat someone up with your iPod dock. Or if you wear your pants too low, plumber-style.

It’s compatible with a whole host of Apple-branded handhelds (including the iPhone) and comes with a USB 2.0 cable, likely for syncing data or tying it to a post so no one mistakenly dumps it in the trash (“Can you throw that scrap pipe away?”). You can get one from Etsy for $95.