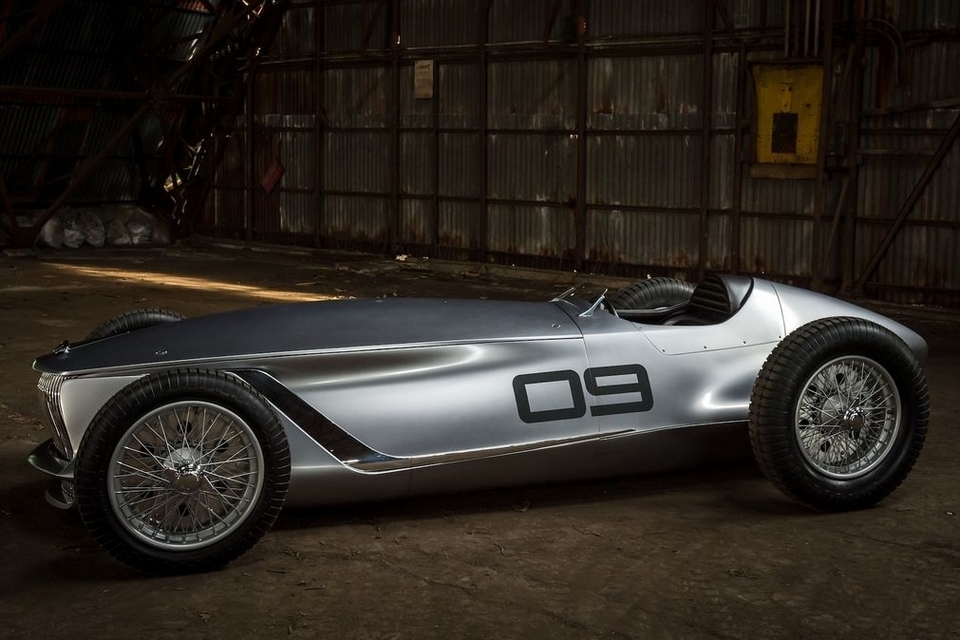 It looks like one of those grand prix cars from the mid-20th century. You know, the ones that came in slender capsule-like shapes that served as the spiritual predecessor of modern Formula racers. The Infiniti Prototype 9, however, is an entirely modern car that’s an imagining of what the company would have made if they built a grand prix car during the 1940s.

As far as styling goes, the car looks like it totally belongs in that era with its long bonnet, exposed cockpit, and open-wheeled layout, albeit with an Infiniti-style grill to tie it down to its modern roots. Despite the on-point looks, chances are, it wouldn’t have been allowed to race in an actual grand prix from that period, since the darn thing is an entirely modern car with an all-electric powertrain hiding underneath that extremely long hood. 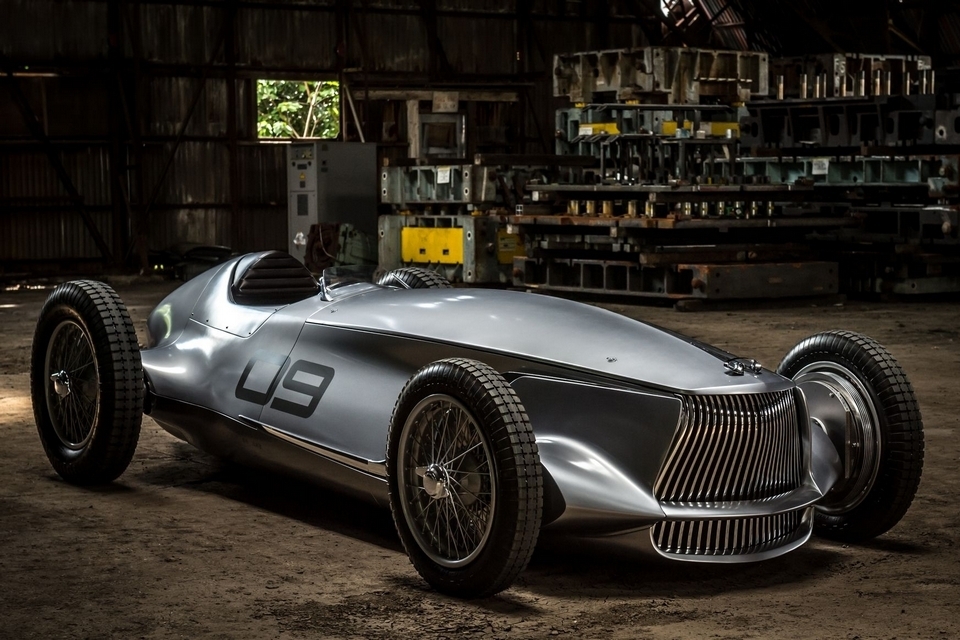 The Infiniti Prototype 9 is powered by a prototype electric motor and battery developed by Nissan’s Advanced Powertrain Department, which sends a respectable 148 horsepower and 236 pound-feet of torque to the rear wheels to get it blasting on the track. That’s enough power to send the slender machine charging from 0 to 60 mph in just 5.5 seconds, all while hitting top speeds of 106 mph. Do note, the battery only holds enough juice to keep that pace for 20 minutes, after which it will require a recharge at the pit stop.  To be fair, though, those 20 minutes of racing sound like they’re going to be a veritable rampage.

The vehicle, by the way, is made with both a steel frame and steel panels, which should help explain the 1,962 pound weight. Why not a lighter alloy? We’re not sure, but we’re guessing they’re trying to stay faithful to the concept of a 40s-era open-wheel racer, at least, as far as exterior qualities are concerned. 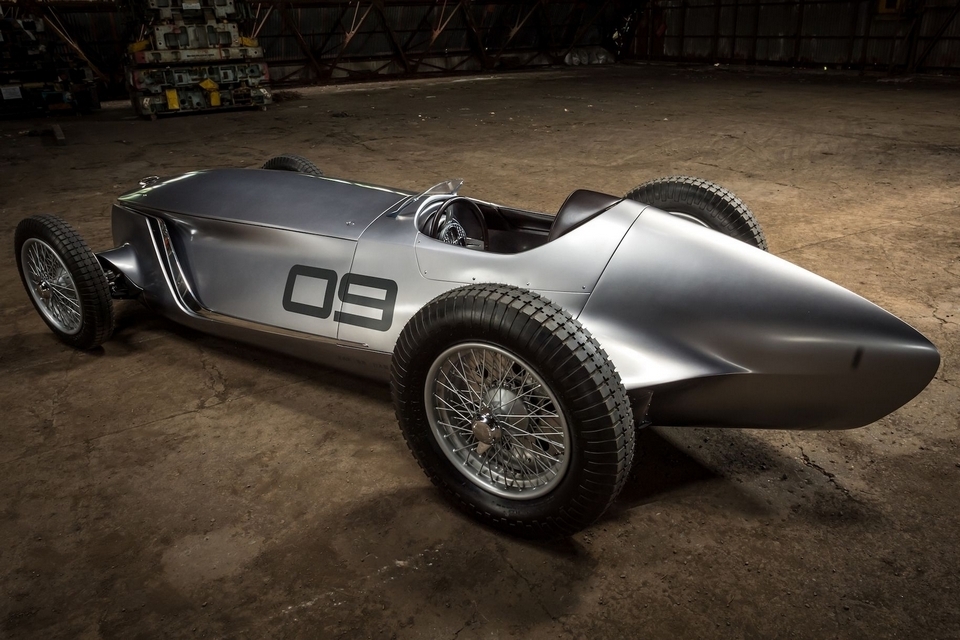 The Infiniti Prototype 9 has a leading-arm rigid axle suspension out front and a De Dion axle in the rear, both fitted with transverse leaf springs, with non-power-assisted steering and hydraulic rotary-type dampers. It uses center-locking 19-inch wire spoke wheels both front and back, all of which are wrapped in period cross-ply competition tires. Braking power is provided by 252mm discs both front and rear.

Dimensions are 170.5 x 71.7 x 35.8 inches (length x width x height), with just 2.5 inches of ground clearance and a 106.3-inch wheelbase. The cabin, by the way, is marked by a zero-distraction layout that puts a steering wheel around a fixed central hub holding the instrument gauges, while the deep bucket seat gets wrapped in black leather with contrast stitching and adorned by subtle Japanese flags stitched into the headrest. 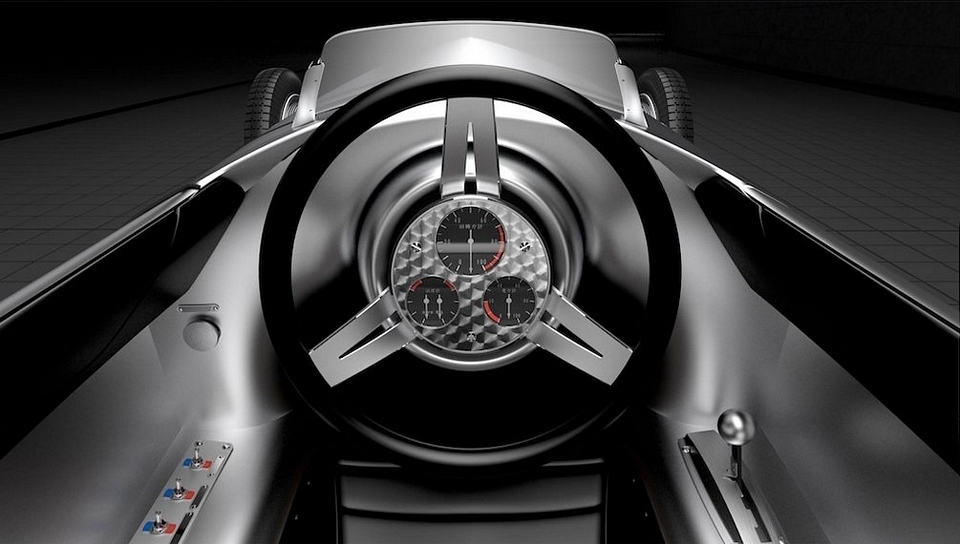 According to the outfit, the vehicle was put together as after-hours endeavor across Nissan Motor Corporation’s various department, with each one lending their own expertise to see the vehicle through from its original rough sketches. The entire vehicle was built in seclusion at Nissan’s research center in Oppama.

Learn more about the Infiniti Prototype 9 from the link below.