Inklet Turns Your MacBook’s Trackpad Into A Pen Tablet 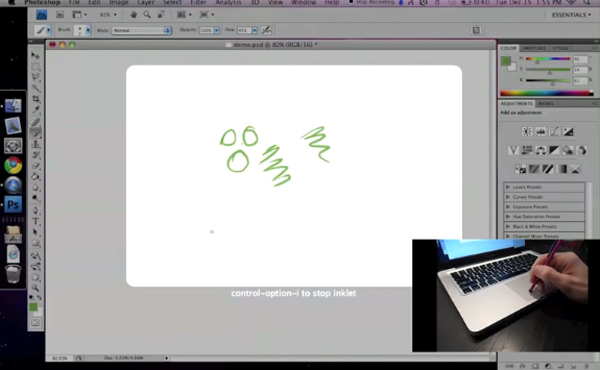 Got enough cash to fork out for a MacBook Pro, but too cheap to buy a drawing tablet? Then you’re exactly the target demographic for Inklet, a new solution that turns your computer’s trackpad into a functional pen tablet.

Created by Ten One Design, the product combines both a software component and the company’s Pogo Sketch stylus (not included) to turn that multi-touch area for controlling the cursor into a usable drawing surface. It does it by increasing the trackpad’s sensitivity to pressure, allowing it to detect a range of pen motions the way a real tablet would do.

Inklet is available strictly for MacBook and MacBook Pro models, so those using other machines won’t get to enjoy the honor of turning their multi-touch trackpads into a cumbersome pen tablet. It works with the handwriting recognition built into OS X, so you can use it to write down your notes instead of typing them too. Drawing feature has been tested to work with a slew of graphics apps on the Mac (they have a list on the product page) and, since it emulates a real tablet, should play nice with most available titles on the platform too.

I’m a PC guy, so I don’t know if those cheap Chinese-branded tablets can work on Macs. If they do, that sounds like a much smarter solution than this can ever hope to be. My no-brand 12-incher literally cost me less than $50 and, while it won’t give you the accuracy of a high-end Wacom slab, it works like a charm.

At any rate, Inklet is available directly from the company website for $24.95. You’ll need to score a Pogo Sketch pen too if you want to use it. In case you already have one (for your iPhone or iPad), you can try the demo before purchasing.