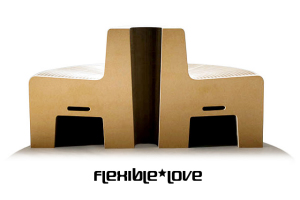 As a kid there’s a great chance you played with the most classic toy of all time, the slinky. You know, that multi fluorescent coil looking thing that was often tangled but somehow still managed to slink itself to the bottom of the stairs. Well in Miao Li, Taiwan it appears there’s one crazy guy who played with his slinky far too often. This environmentally conscious inventor is known by family and friends as Chishen Chiu.

One day when Chishen was in Taipei he came across an organ-honeycomb like box which he developed a strong interest in. As Chishen grew up in an area where there were many family owned factories, which ranged from creating cardboard boxes to high tech computer parts, he had seen a lot of unusual things, though something about this particular box structure got Chishen thinking. Within days he had taken the unusual organ-honeycomb like structure and created a detailed design for a chair, then later made a working model which turned out just as expected. This chair is an unusual one indeed, when compressed it will seat one, though when fully extend it seats an amazing 16 people or 1920kgs, considering the seat itself only weighs 25kgs this is simply amazing.

Chishen produces the chair entirely from recycled materials, mainly consumer paper and industrial wood, while this alone reduces the impact on the environment, he also uses pre-existing production methods which make him one of the most environmentally conscious people on the planet. As Chishen Chiu obviously loved his slinky more than most, he felt the only suitable name for this awesome chair was FlexibleLove. The FlexibleLove is available in a 16, 12 or 8 seater and even comes in a mini, which is specifically designed for showing people how it works, though for today’s kids it’s a great alternative to that old tangled up slinky.