Insect Snacks Let You Munch On Baked Worms And Crickets 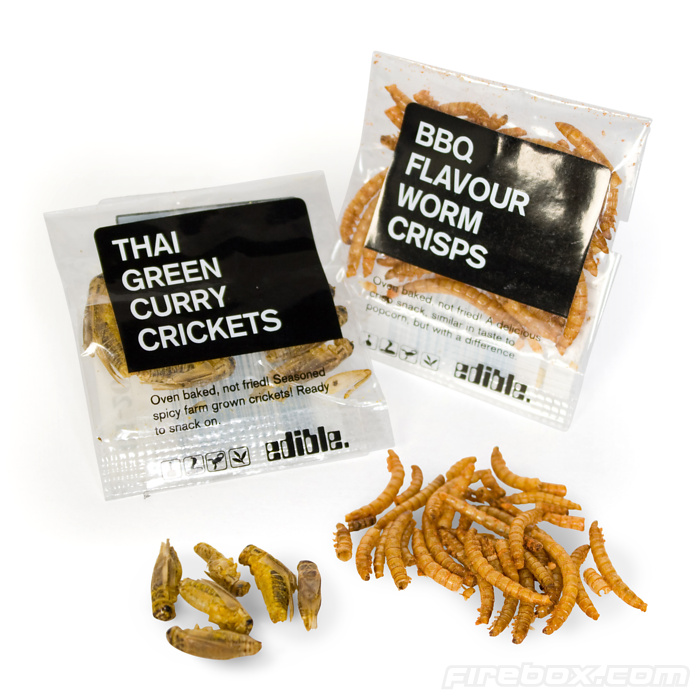 Ever watched one of those food shows on Discovery channel where they eat bugs and other gross critters?  Turns out you don’t have to jet set to exotic places to do the same.  Just order a pack of Insect Snacks and you’ll be dining like an adventurous man of the world

No, these aren’t crackers or candies shaped to look like insects.  Instead, they’re real bugs, harvested, killed and cooked for your consumption.  Yum yum.

These Insect Snacks come in two variants: Thai Green Curry Crickets and BBQ-Flavour Worm Crisps.   Yep, crickets and worms.  Don’t worry, they’re supposed to be clean, since these are properly-fed insects raised in a farm.  Yep, a farm that breeds insects.  The crickets are raised on a diet of mixed grain and cereals, while the worms eat whatever it is worms are supposed to dine on.

Each bag contains either 6 crickets or 15 worms, all of which are baked (rather than fried) for healthier preparation.  According to the product page, the curry-flavored crickets go well with cold beer, while the BBQ-laced worms taste like popcorn (so it should probably go great with soda).

We’re not sure about nutritional content for these Insect Snacks, but we’re guessing protein and a lot of shock value.  It’s available now, priced at £6.99 for two bags.