Intel Reader Scans Books, Turns It Into Audio For The Visually-Impaired 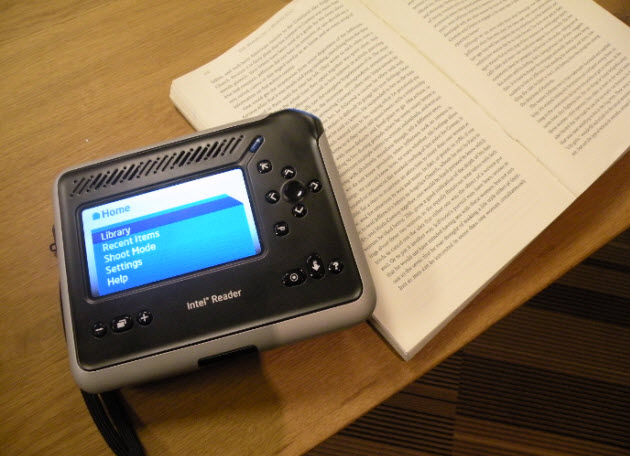 Sure, text-to-speech isn’t anything new.  Putting it in a small box that can also scan physical documents, however, changes things up a tad.  That’s exactly what the Intel Reader does, helping the visually-impaired listen to books, newspapers and other physical documents using just one self-contained, handheld device.

What exactly can it do?  The gadget will readily scan pages off any printed material, run it through an onboard OCR facility, convert it to text and encode it as an MP3.  Users can then listen to the resulting audio, effectively allowing those with sight difficulties to work with all types of printed matter, from newspapers to business documents.

The Intel Reader is a small device, measuring about the size of a media player.  It holds a small screen, where users can navigate the menu system and access various functions using physical buttons.  A 2GB flash storage comes onboard, enough to hold over 500,000 pages of text and 600 pages of material that was scanned from the gadget’s 5.0 megapixel camera.  Users can choose any of the text or scanned items to be translated into audio, effectively having the gadget read it to them aloud.  The speed at which it reads is adjustable via the settings.

According to Intel, prototypes of the handheld machine were successfully tested with over 400 visually-impaired users, including some with 100% blindness.  While it’s not the kind of gadget that’s going to whet many modern techies’ appetite, it sounds like a very useful service to a minority of users.

The Moblin OS-based Intel Reader is available now.  Priced at $1,500, it sounds a tad overpriced for its functions.  As a specialty device catering to a highly-targeted, often-ignored market, though, it sounds like something that’s long overdue.