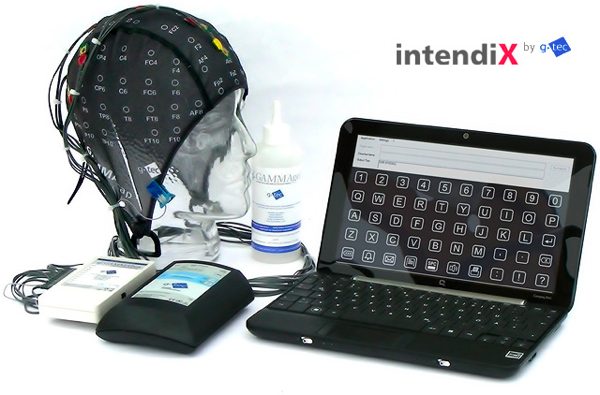 Soon, you will be able use your fingers to pick your nose (or other less gross things) while you type on a computer. How? Using a system called Intendix, which measures brain activity to figure out what letters you want to appear onscreen.

Created by Guger Technologies, the brain-computer interface (BCI) was introduced at CeBIT last week, billing itself as the first patient-ready, commercially-available system of its kind. It’s not intended for use in offices yet, though. Instead, they’re looking at marketing it to severely handicapped individuals and paralyzed patients who need an alternative to the usual mouse-and-keyboard input combo.

Intendix uses an EEG cap that’s worn over the entire head, save for the face area, and a typing software for your computer. The actual operation sounds simple enough that the company claims you’ll be up and running after a 10 minute training. A grid of letters will appear on the screen, with each character flashing one by one. Seeing your desired letter flash will cause your brain activity to spike, which the headcap will then transmit to the software which types it.

According to Guger, mastering the system will allow individuals to type as fast as one character per second. While that doesn’t exactly improve on existing typing speeds (you can probably compose an SMS on a T9 keyboard at a much faster rate), it does finally make thought-to-type a reality. Plus, the capabilities don’t end there, as the system includes facilities for triggering alarms, converting text to speech, copying, printing and sending an email using only your mind.

It will likely be a while before you can do stuff other than just listening to music while typing without dampening on your productivity as you’d do with the Intendix, but it’s a way cool tech all the same. Pricing ensures that you aren’t likely to get it unless you actually need one, its  $12,250 for the entire thing (computer not included).

Now, I will be happy if some one can just make a brain controlled mouse or as I like to call it brain cursor for around $100 that clicks on the links on my computer screen without me having to do it with hands. How awesome would that be!