Invisible Money Clip Holds Your Money With Your Money 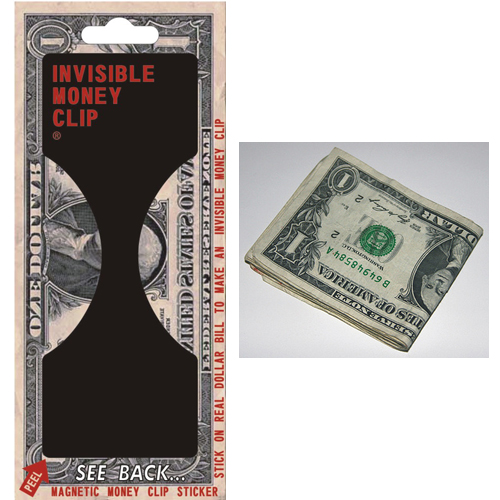 Bulky pockets does not a dapper cat make.  And when it comes to keeping your bills in place, there’s nothing better at staying out of the way than one of those little money clip thingies.  Well, nothing other than an Invisible Money Clip.

Super high-tech invisibility powers, right?  Ummm.. no, the invisible part is not some magical covert technology that renders things imperceptible.  It’s not some mystery voodoo magic, either.  Instead, it’s a clever trick that turns the top bill on your stash into a money clip for holding the rest of the folded bills.

The Invisible Money Clip is actually a sticker that you can attach across one side of a paper currency.  The actual sticker material is embedded with magnets, so you can fold the bill with the adhesive part inside and have it fasten shut.  Laid over the stack of dollar bills you earned from selling lemonade, you can fold it for use as an improvised money clip to hold the pile tight.

To onlookers, the only thing visible is the bill on top, so your money will look like they’re staying together on their own.  Like magic.  The sticker is ultra-thin, too, so you won’t even feel like there’s anything but a wad of cash sitting in your pocket (well, other than keys and cellphones and… ummm).

We’re not sure how thick of a pile those magnets can handle.  The sample stack on the video below looks ample enough for a night about town, though (unless you plan to party like a rapper who just sold a million albums).  The Invisible Money Clip is available for $9.99.