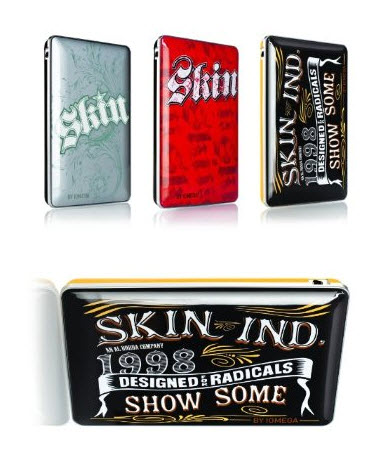 You love UFC and you’ve got your Affliction shirt, Monster Energy cap and Ed Hardy messenger bag to prove it.  Not to mention the fake tattoo sleeves you’ve got on both arms.  So what are you doing with a generic external hard drive?  Put some of that reprehensible personality into your portable computing with Iomega’s 500GB Skin HDDs, which come with tattoo-themed designs, courtesy of Skin Industries.

There isn’t anything radically life-changing here.  It’s just regular 2.5-inch 500GB hard drives in slightly-rounded housing with USB 2.0 interface and Iomega’s Drop Guard feature.  Except the cases get slapped with a hot-looking  Skin Industries graphic in that all-familiar tattoo culture style.  The designs aren’t just lame decals either – the images are baked into the plastic, so they shouldn’t come off all  too easily.

Only three designs are available for the initial release of the Iomega Skin HDDs, namely Knock Out, Red Hot and Radical.  The company says it’s a trial run, as a way to gauge how consumers would take to more exotic hard drive stylings.  We think it’s a good idea.  After all, the last thing I want is to buy another hard drive that looks exactly like the last two ones I already bought.

Of course, these things teeter a little too close to the same uncomfortable Ed Hardy territory that’s about as cheesy as it is light on the eyes.  Still, I’d take it over another generic slab of plastic or metal housing.