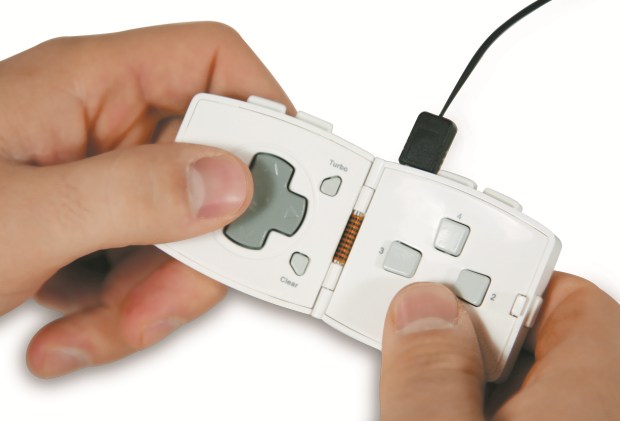 If you grew up playing on consoles instead of a PC, you probably prefer mashing on a game pad over a keyboard.  And that preference won’t change just because you’re sitting in an airport, waiting for a flight that’s been moved four hours and looking for something to kill time. This is the mini-controller you’ll be packing for those situations: the Ion Go Pad.

Made by Ion Audio, the tiny game pad folds into a compact size that looks about the dimensions of a touchscreen iPod Nano.  That’s plenty small enough to fit in your front pocket, making it a lot more convenient to bring around compared to a regular-sized game controller.

The Ion Go Pad is a fully-functional game pad accessory that connects to Macs and PCs via a retractable USB cable.  Designed to serve your on-the-road button-mashing needs, it features a two-axis D-pad, four action buttons, four shoulder buttons and even a turbo button.  We’re not sure how ergonomic the whole thing is (or even how sensible the button placements are), but it sure beats tapping on ASDW to move and the Space bar to fire every single time.

It works just like any regular USB controller, so you should be able to use it for any of the games that support the Rumblepad you usually bust out at home.  There’s no vibration, but the game should work great for those platformers and scrolling arcade titles that can easily make four hours feel like they never even happened.

You can order the Go Pad directly from Ion Audio, priced at $19.99.