Oscium’s Kit Turns Your iPad Into An Oscilloscope 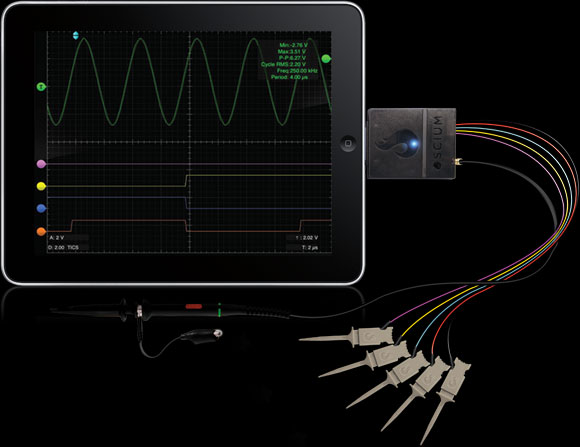 Oscilloscopes are widely used in even wider fields.  I’ve never worked a job in any one of those fields where I needed one, but I did watch a tech guy do some electrical measurements using a handheld oscilloscope before.  He had a big gut — that’s all I remember.  Well, now that guy can turn his iPhone or iPad into one with the Oscium iMSO-104, an oscilloscope kit for iOS devices.

Set consists of a hardware kit that attaches to the dock connector, which works hand in hand with a downloadable app (iMSO) from the App Store.  The company appears to be marketing it towards inventors and similarly-inclined home tinkerers, even billing it as the “preferred scope for the next generation of inventors.”

The Oscium iMSO-104 is a mixed signal oscilloscope, with one analog and four digital inputs, results from which you can display on the screen together at the same time.  It’s supposedly the  smallest device of its kind in the world — which is probably accurate, given that the main connector looks barely larger than a Zippo.

The accompanying app happily embraces the iOS platform, adding hand gestures to the usual oscilloscope displays for zooming, repositioning channels and setting analog trigger levels.  It can work with all generations of the iPhone, iPod Touch and iPad.

Each set of the Oscium iMSO-104 includes the main oscilloscope hardware, a 1x/10 analog probe, logic harness, SMD grabbers, analog tip covers and a screwdriver.   You can also try a demo version of the app from the App Store.  Price is $297.99.