With Appgun, Your iPhone Is Now A Gun 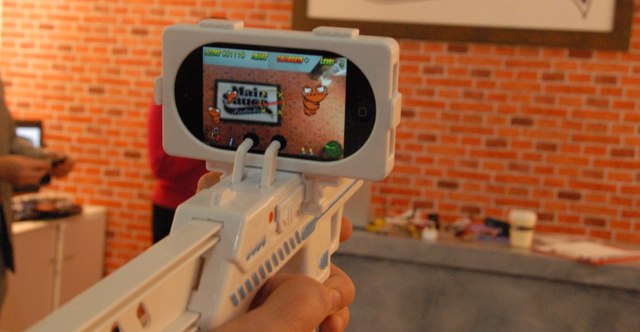 I think it’s now time we stop kidding ourselves.  The iPhone is not meant for calling and texting, and the iPod Touch is not designed for playing music.  Instead, their real purpose is entertaining the snot out of you with the wackiest games ever imagined.  And the Appgun takes that noble tradition one step further.

What would a toy gun have to do with handheld iOS devices?  In this case, your iPhone or iPod Touch can slot into the top side of the gun, allowing it to act as your sight.  Using the built-in camera and augmented reality graphics, you can then begin shooting virtual characters that appear in the very room you’re currently chilling in. 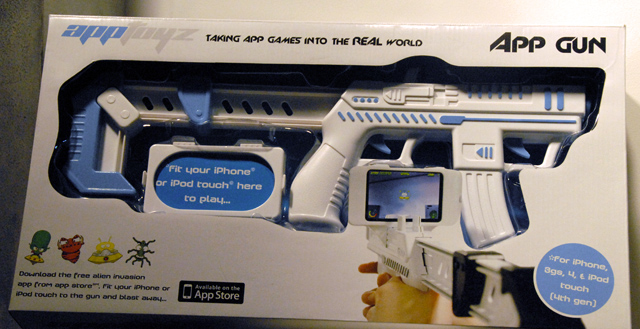 Made from plastic with a similar plasticky finish, you won’t mistake the Appgun for a real rifle anytime soon.  Which is great, since it’s more likely aimed at kids than pea-brained old people like you (just kidding).  It’s got two triggers (one by the handle and one by the magazine), so both kid- and adult-sized hands can play with it comfortably.

Instead of interfacing with the iPhone or iPod Touch via the SDK, the gun actually works with the devices in a much simpler manner.  A pair of plastic stamps are positioned directly to the bottom of the landscape screen, which presses the app’s trigger buttons when you fire.

Only one app has been confirmed to have been made specifically for the Appgun.  We don’t know the title, but it’s supposed to be an augmented reality shooter with alien enemies superimposed to your surrounding environment.   Price for the toy is expected at around $30.