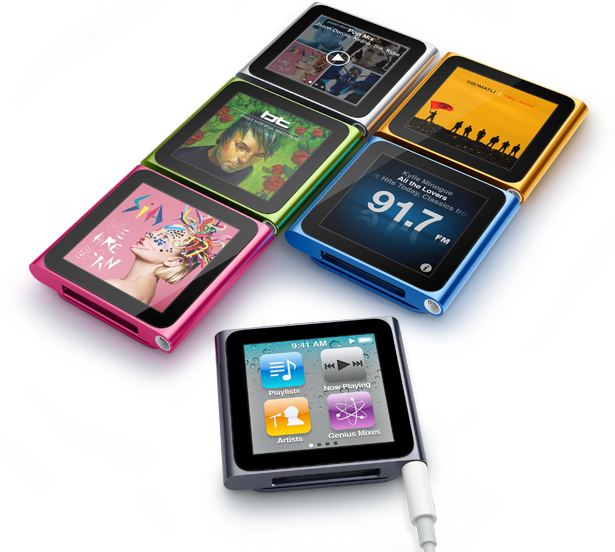 So, Apple introduced the latest generation of iPods yesterday.  One of my favorite updates happened for the iPod Nano 6, which has been completely redesigned with multi-touch display and controls, paired with a considerably shrunken size.

Completely eliminating the clickwheel, the sixth-generation device takes on an almost square form factor, measuring 1.5 x 1.6 x 0.35 inches.  Weighing a light 21.1 grams, it has a clip around the back for mounting on a sleeve, belt or pocket, making it an ideal portable music player while engaged in physical activities. 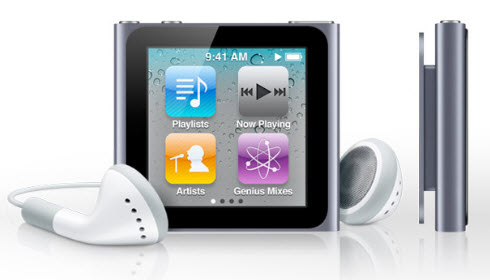 The iPod Nano’s front panel is covered almost entirely by the 1.5-inch capacitive touchscreen, which features multi-touch support and 240 x 240 pixels of resolution.  You still get three physical buttons – two for the volume, one for the sleep/awake function – all of them lined at the top of the device.  Playback is restricted to music and photos.

Touch controls work much the same way as other Apple devices (you can swipe, tap, flick, drag and rotate), so those who’ve used an iPhone or iPod Touch shouldn’t find too many surprises.  Features include a built-in FM radio (you can pause and rewind stations within a 15-minute buffer), Shuffle-style voiceover support, and the Nike+ fitness add-on.  Battery is good for up to 24 hours of music playback on a single charge.

Clad in polished aluminum and glass enclosure, the iPod Nano 6 comes in six colors – silver, graphite, blue, green, orange or pink.   You can get either the 8GB or 16GB version, priced at $149 and $179, respectively.