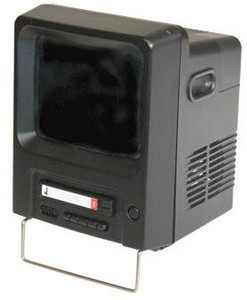 Remember those old-school portable TV-and-VCR combos that integrated a small CRT set with a full-featured VHS player, so you can watch your movies during outdoor trips and picnics?  Apparently, some folks decided to salvage those designs and manufactured them as the iPod Nano Converter TV.  Instead of pushing VHS tapes into its mouth, however, it churns out movies stored in your iPod Nano.

While you can get always get a dock that integrates your iPod seamlessly into your home entertainment system, where’s the fun in that?  The  iPod Nano Converter TV, on the other hand, lets you relive the 80s, back when every living room sported a tape rewinder that made grinding noises every time it worked that tape-spinning magic.

Truth be told, the  iPod Nano Converter TV doesn’t really add that much screen real estate, displaying your videos on a panel that’s only about 2.8-inches larger than the Nano’s LCD.  The side-mounted speakers aren’t state-of-the-art either. Plus, the bulky frame totally defeats the compact ideals of Apple’s small media player.  However, the mere thought that you’re playing tunes and video on a relic of a less-advanced decade can sure make up for those shortcomings.

I’d probably keep this as my bedside player, for those rare moments I want to listen to sounds or watch a clip before I go to sleep.  It also makes a nice viewer for the car during long trips to keep the kids busy.   At a £14.99 price tag, the novelty value of having the shell of a compact TV/VCR combo could be worth that price alone.  Similarly (by virtue of the price), don’t expect the output to be anything good.