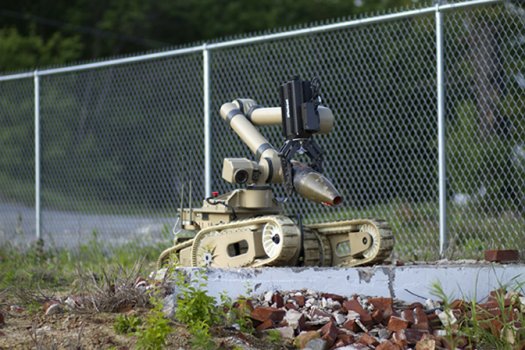 iRobot’s army of automatons from the floor-washing Scooba to the situational battle awareness Firstlook are among the most impressive in the market today.  Their latest, the iRobot 710 Warrior is even more impressive performing a variety of tasks that give it serious workhorse potential.

While relatively small at 3 feet long and less than 2 feet tall, the robot is no lightweight, packing hardware that total a hefty 350 pounds.  Yep, this ain’t the kind of robot you put in a backpack.  All that weight isn’t going to waste, though, as this robot can perform some downright special tasks. 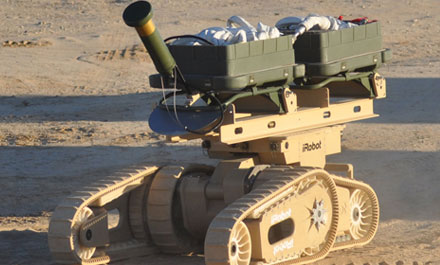 The iRobot 710 Warrior is literally built like a tank, sporting caterpillar tracks that allow it to climb stairs  and cover uneven terrain, giving it the mobility necessary to cover both outdoor and indoor areas capably.  Using a clever mechanical design, it can clear all obstacles as high as 1.5 feet, while the strong build lets it carry payloads up to 150 pounds.  An electric motor drives its forward movement, letting the robot run at a top speed of 8 mph with enough power to tow a large car (seriously).

A folding mechanical arm sits on top of the robot, which can be weaponized or fitted with any job-specific tool.  The arm, which measures 6.5 feet long, can be used to perform things as delicate as opening a car door or as rough as smashing a window.  Yep, it’s the thug robot henchman every supervillain has been waiting for.  Control of the robot is done remotely using an Xbox controller and iRobot’s Aware 2 software, with video feed provided by six cameras installed throughout its body.

Massachusets-based iRobot has recently launched the 710 Warrior.  No word on pricing, but you can ask for a quote directly from the link below.