Iron Man 3 is set to hit theaters on May 3 this year.  As it has been in previous installments of the franchise, the merchandise will rain down in spates.  And Hasbro has some of the most exciting we’ve seen to date.  Want a taste?  Read on below. 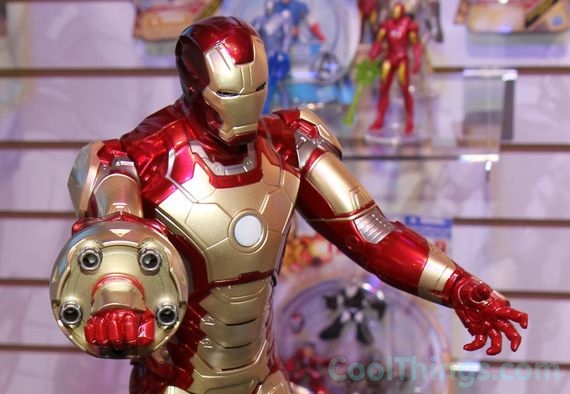 If your choice of superhero gameplay lies more along dispensing firepower, then you can skip the rest and head straight for the Marvel Sonic Blasting Iron Man Figure.  The biggest of the bunch, it measures a full 15 inches tall with all parts built to scale. 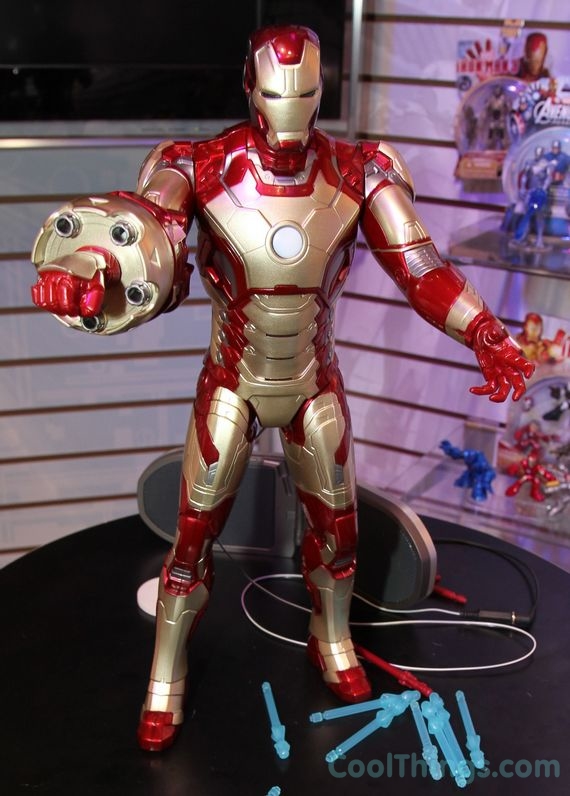 Designed to wage battle, it features a motorized rotating missile blaster that carries ten projectiles at a time.  You can fire up to five in one move, allowing you to swiftly destroy evil intent wherever it’s necessary.  Features include Night Ops black and gold suit, glow in the dark armor, light-up chest, light-up eyes, and pre-recorded sounds (battle sound effects and heroic phrases).  It requires three AA batteries to operate. 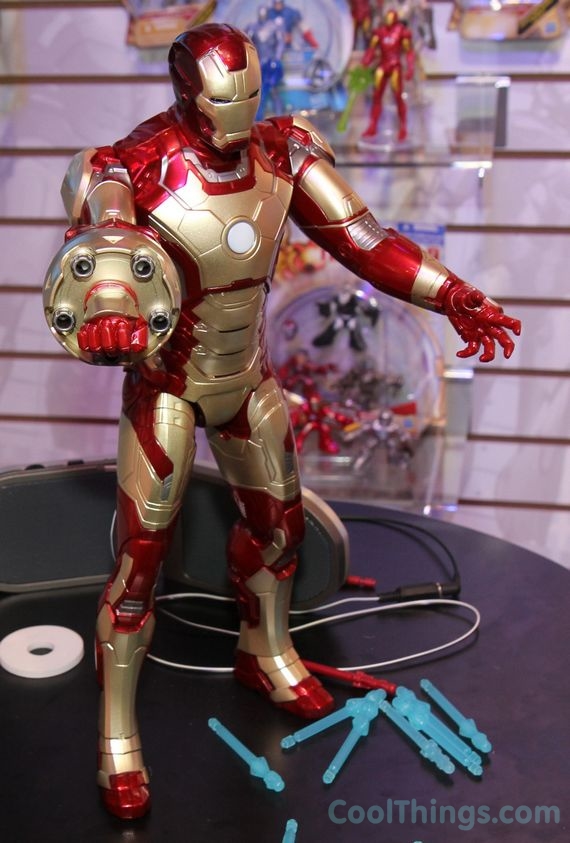 The Marvel Sonic Blasting Iron Man Figure will drop in stores this Spring, priced at $34.99.  Each figure comes with 20 missiles.

Aside from the action figures, they’ll also be selling 3-packs of Arc Light Assemblers.  Each pack will contain armors, gear and accessories for the Assemblers Action Figures, including an armor with a light-up arc light in the torso.

The Marvel Iron Man 3 Assemblers Action Figures will debut in the Spring, priced at $9.99 each.  The Arc Light Assemblers pack will retail for $24.99.

While Iron Man can always jet himself from one place to the next with just his armor alone, it serves him well to roll around in an Assemblers Battle Vehicle some of the time.  It’s not quite as customizable as the action figure, although it comes with multiple weapon arms that you can rotate through, attaching and detaching depending on which one you’d like to play with.

The Battle Vehicle also comes with an Iron Man action figure designed to ride in the cabin, as well as a launching feature that will send Shellhead soaring through the air.  The toy launches in the Fall, priced at $24.99.

Like your action figures on the minuscule scale?   You can have your fill with the Marvel Iron Man 3 Micro Muggs.  Hasbro’s smallest Iron Man collectibles yet, each one stands just 1.75 inches tall complete with a stand-in base (just like army men), making them ideal for lining up in your desk to serve as guardians of your workstation.  A total 24 different figures are available (all in a cartoon style), each one decked in either a different Iron Man armor or Tony Stark outfit.

The Marvel iron Man 3 Micro Muggs Action Figure will debut in the Spring, priced at $2.99 each.

Not quite a fan of smaller action figures?  Don’t fret, because Hasbro has you covered too with the Marvel Iron Man 3 LEGENDS 6-Inch Figures.

Six different sized to scale figures will be available in the line, including Iron Patriot, Classic Iron Man, and Heroic Age Iron Man.  As with other Marvel Legends releases, each figure will come with a different body part that you can use to build a seventh member of the line — Iron Monger.  Three models come out in the spring with another three in the fall, all priced at $19.99 apiece.

These action figures take on the same size as the Assemblers line, sans the interchangeable armors.  Six designs will be available, each one armed with a weapon accessory and featuring five points of articulation.  The Marvel Iron Man 3 3.75-Inch All Star Action Figure will retail in the Spring, priced at $5.99.

This set features two packs of small-scale Iron Man figures: Battle Vault and Expo Air Assault.   Each pack comes with three Iron Man figures all based from the Iron Man 3 film.  The Superhero Squad Movie Pack will hit stores in the Spring, priced at $12.99.

Love Nerf?  Iron Man can do that too with these Marvel Iron Man 3 Iron Flyers — foam dart Iron Man figures that can be fired and launched at distances of up to 15 feet.  Only the Mark 42 and War Machine armors are available, though.  It launches in the Spring, priced at $9.99.

Action figures are awesome, but sometimes, kids just want to race cars and have them crashing onto each other.   The Marvel Iron Man 3 Motorized Battle Chargers are built to do just that.

These pull-back-action motorized vehicles will run across the floor drag race style then flip automatically into robot mode.  Only two models, though — Mark 42 and War Machine.  It will hit stores in the Spring, priced at $9.99.

Want your Iron Man 3 toys to come with some electronic action?  They got your covered, as well, with the Marvel Iron Man 3 Arc Strike Action Figures.

Featuring separately-sold figures of Iron Man and Iron Patriot, the toys boast the latest armor designs as they will be seen in the upcoming film.  Both stand a large 10 inches, with pulsing lights, combat sounds and heroic phrases available at the touch of a button.

The Arc Strike Iron Man also does a flight-simulating move, tilting its head while it pretends to soar high up in the skies, along with two play modes — Ground Attack and Air Attack.  The Arc Strike Iron Patriot, on the other hand, packs a missile pack on the shoulder, which you can activate to launch a double-headed missile onto an unsuspecting supervillain target.  Both require AAA batteries for operation.

The Marvel Iron Man 3 Arc Strike Iron Man and Iron Patriot Figures hit stores in the Spring, priced at $19.99 each.

Arguably the best action figures in the bunch, the IRON MAN 3 Titan Hero Series gets both the Iron Man and the Iron Patriot.  Built for realism, these scale figures measure 12 inches tall, with five points of articulation and classically-styled detailing Iron Man faithfuls are bound to appreciate.

Every superhero movie premiere needs wearable toys and Iron Man 3 is not going to be an exception.  Hasbro’s Spring lineup of wearables include:

Arc FX Mission Mask – Billed as “the most high-tech Iron Man mask yet,” it features glowing visor lights and targeting beam light that lets you (well, your kids) act out their favorite Robocop… errr… Iron Man fantasies.   The thing’s got missiles, too, allowing you (again, your kids — tee hee) to show up in a room, show off a little light show in their forehead, aim a laser at people, and decimate them with dual blasters.  And to complete the package, it comes with sound effects and heroic movie phrases.  Price is $24.99.

Motorized Arc FX Gauntlet – Want to class up your Nerf warfare?  Add this wrist-mounted weapon to your arsenal and begin shooting foam discs at distances of up to 20 feet.  They use standard NERF foam discs and come with motorized shooting action for rapid-fire release.   Price is $19.99.

Arc FX Wrist Armor – Similar to the Gauntlet, this is a wrist-mounted Iron Man 3 weapon.  Unlike it, though, this isn’t motorized and shoots standard foam missiles a shorter distance.  Price is $6.99.

Arc FX Repulsor – Another arm-mounted weapon, this one straps along the wrist and palm, with adjustable straps so you can wear it when your kid’s tired of playing pretend Iron Man (not really, we’re just kidding, we know you’re too mature for that).  Price is $9.99.

Arc FX Hero Mask Assortment – These are, pretty much, standard masks with one extra feature: it has glow in the dark faceplates.  That way, you can do your Iron Man roleplay even in the dark.  Comes in Iron Man and Iron Patriot designs.  Price is  $9.99.

Check out the complete image gallery below. 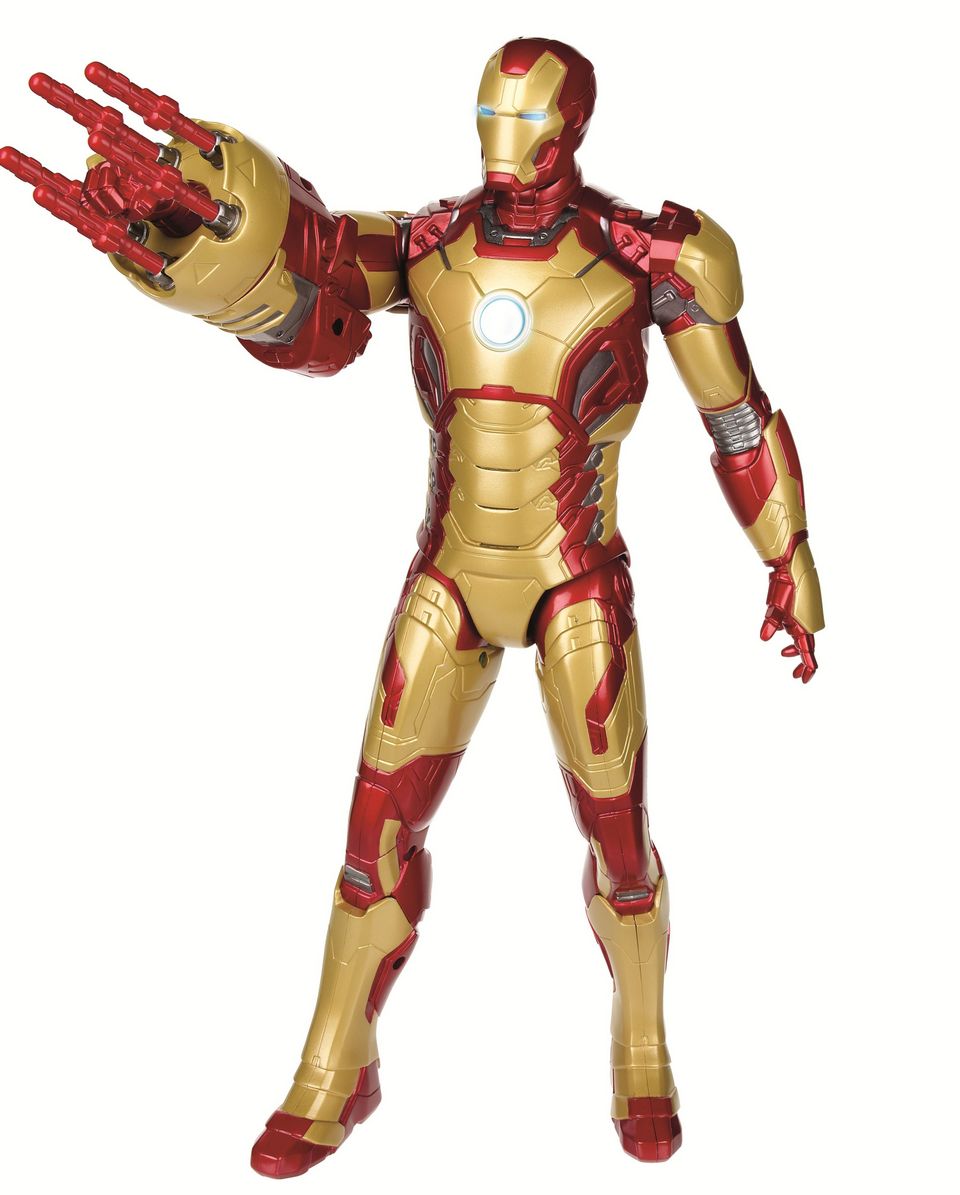 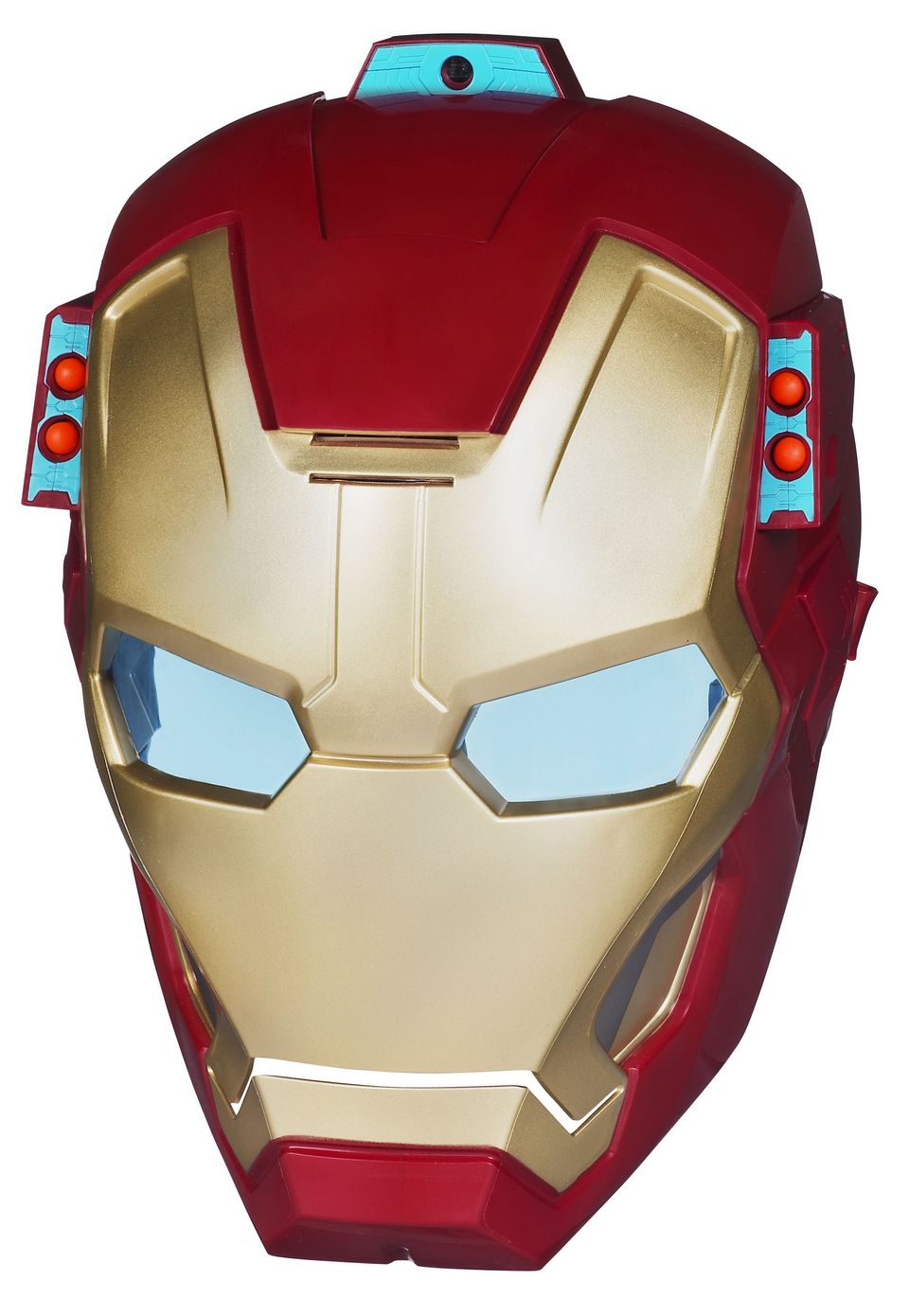 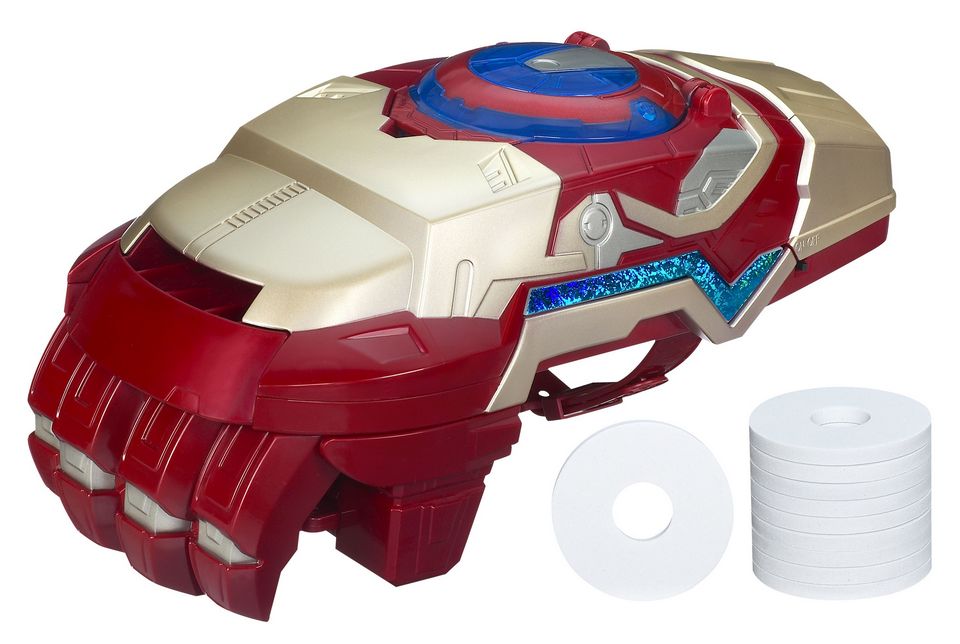 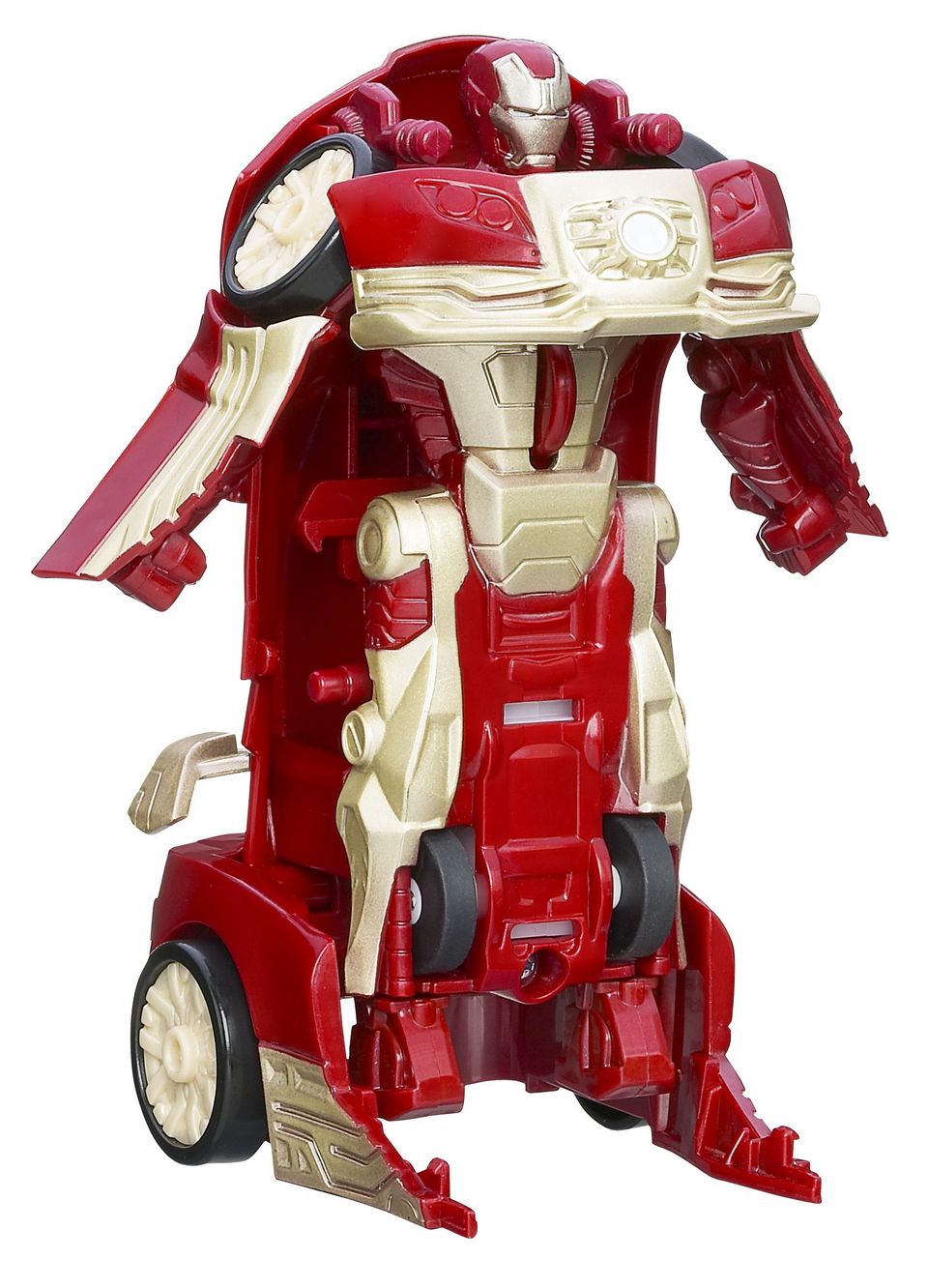 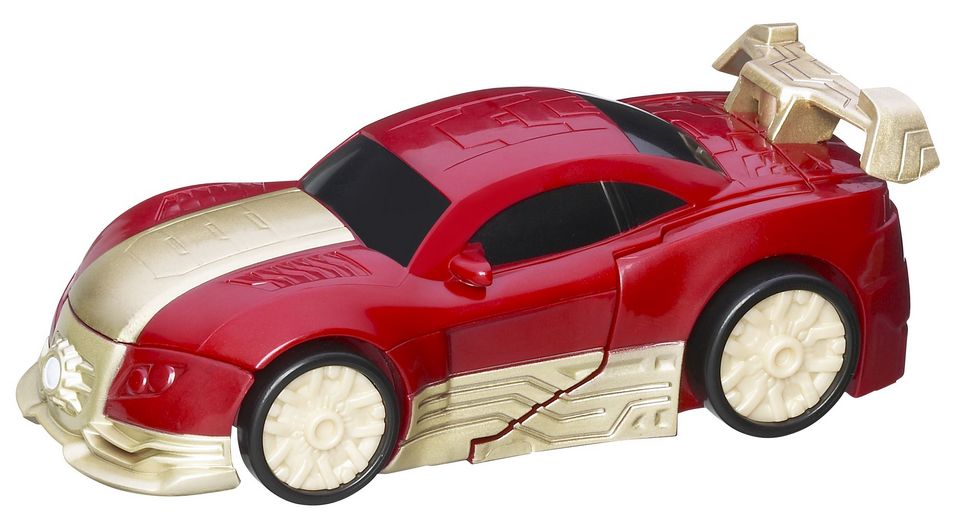 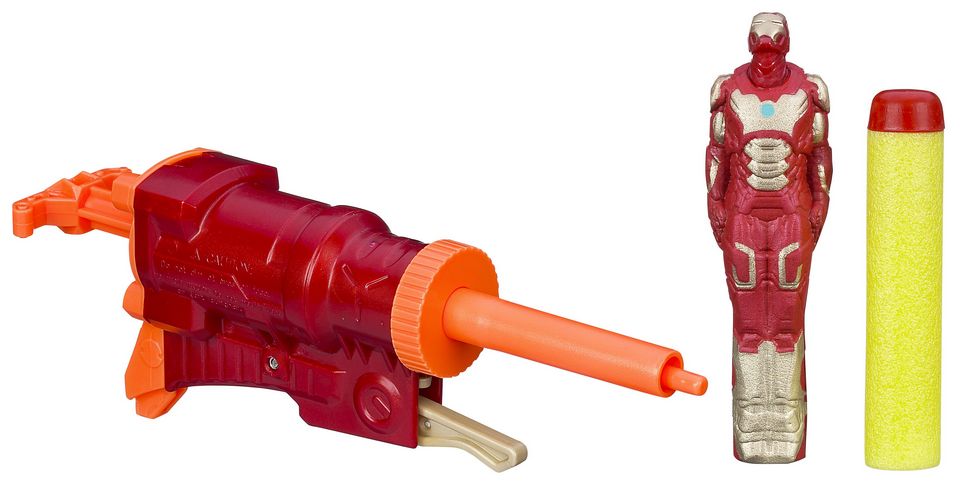 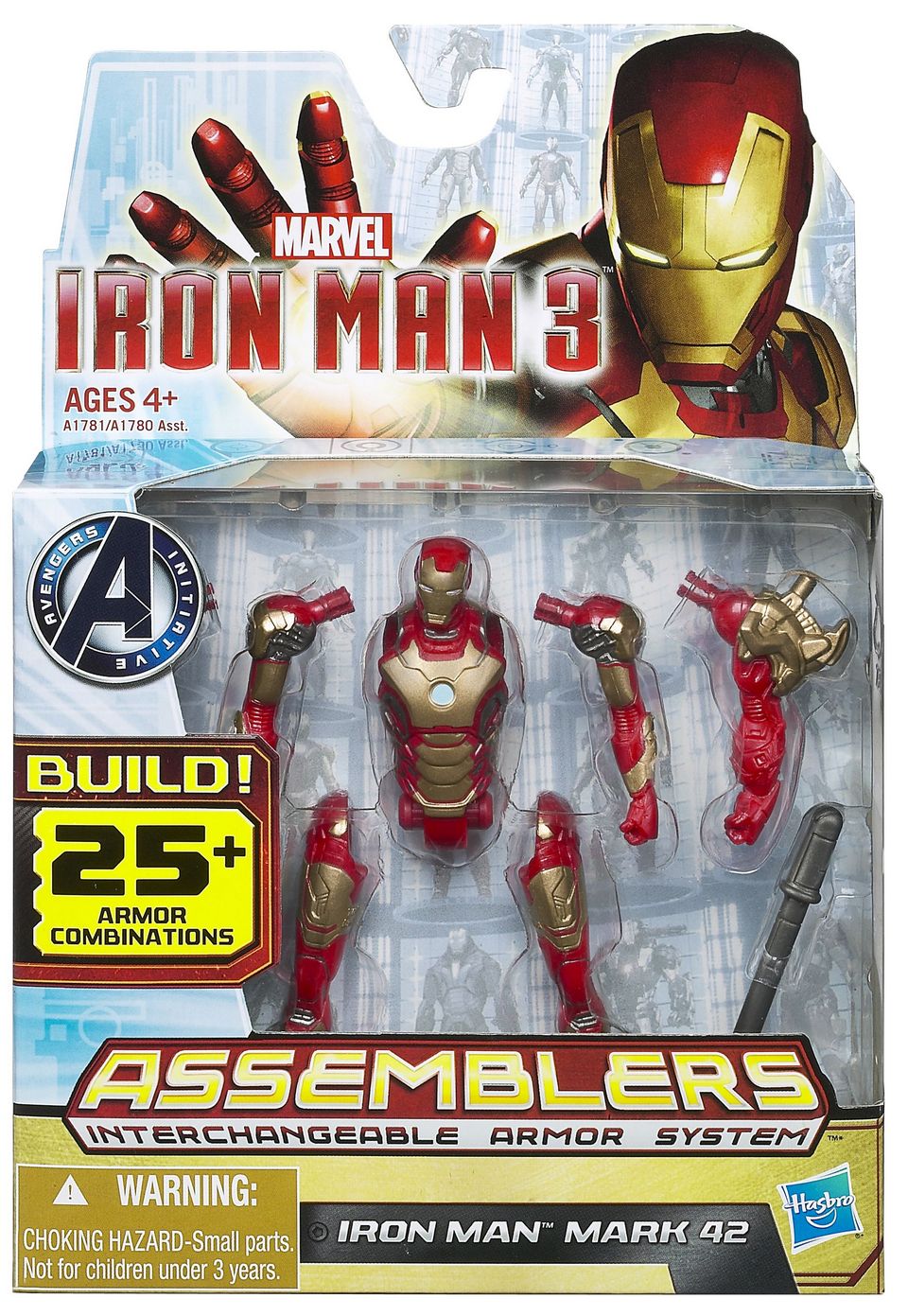 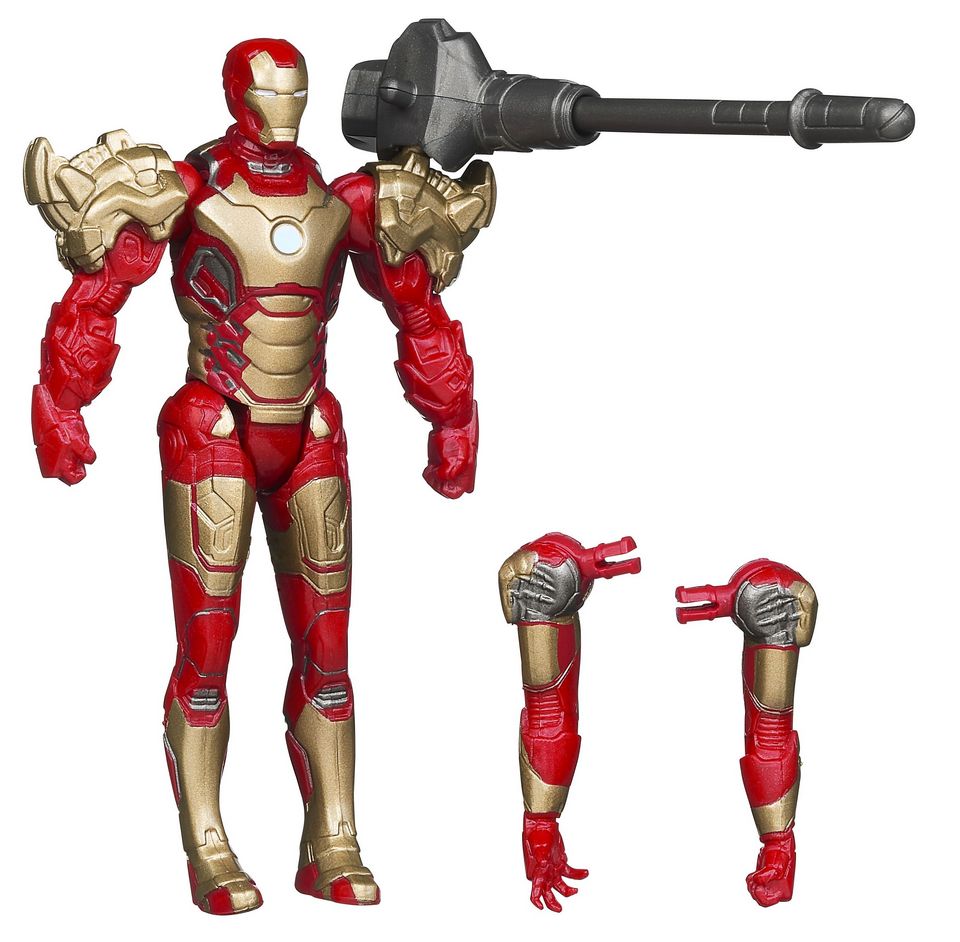 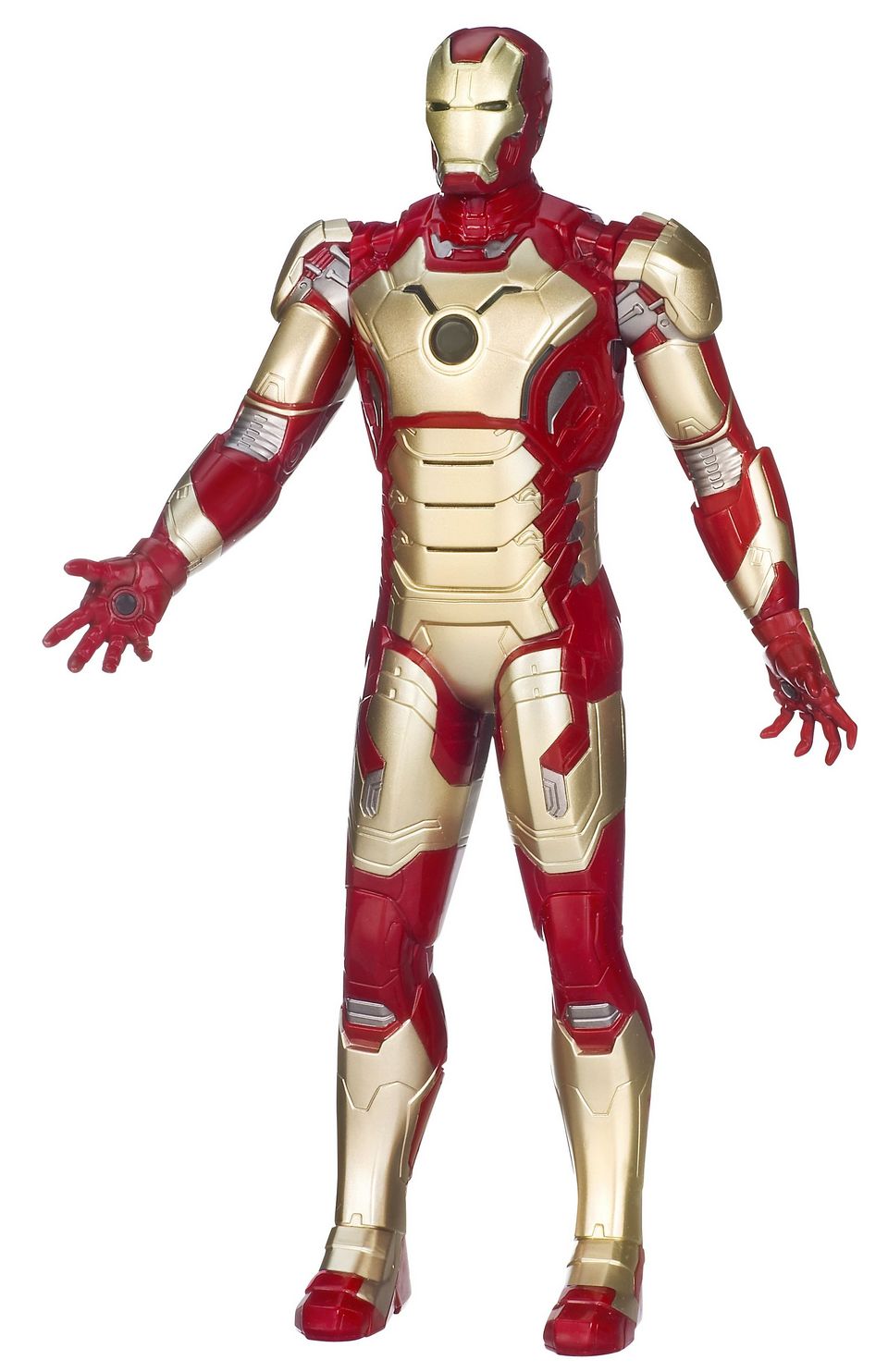 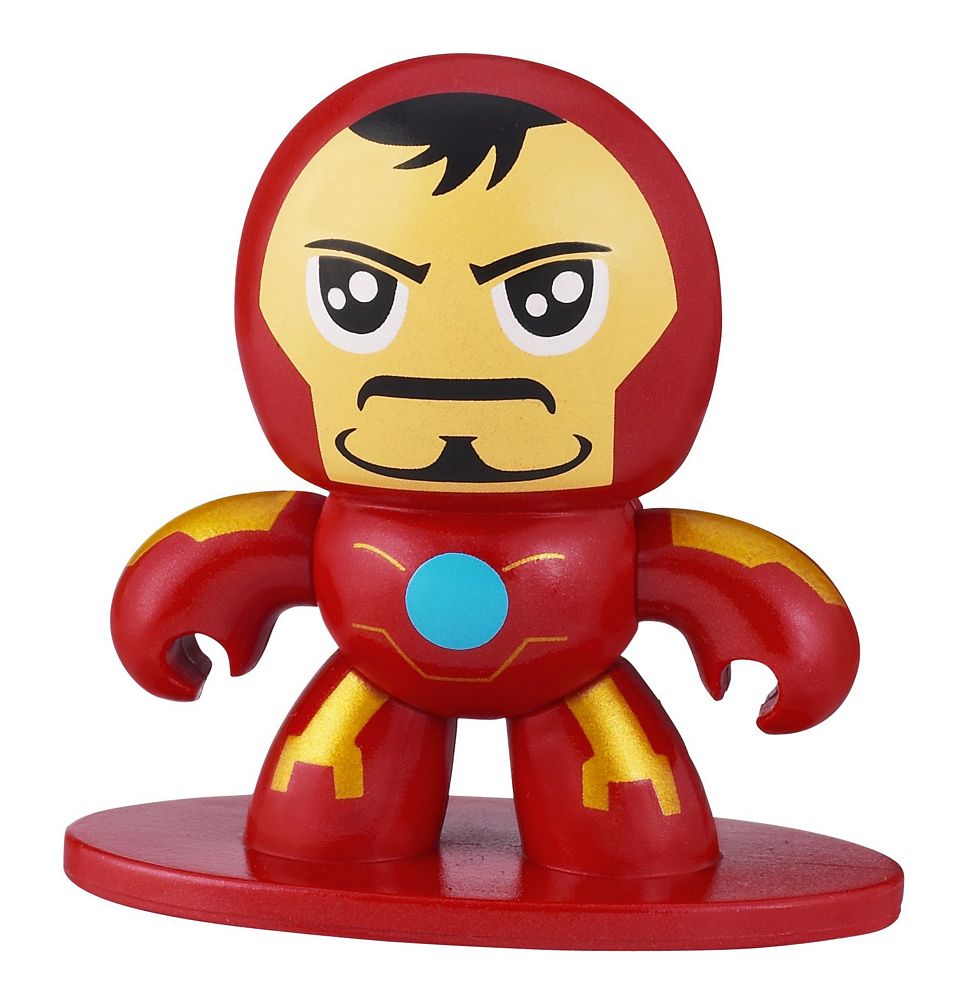 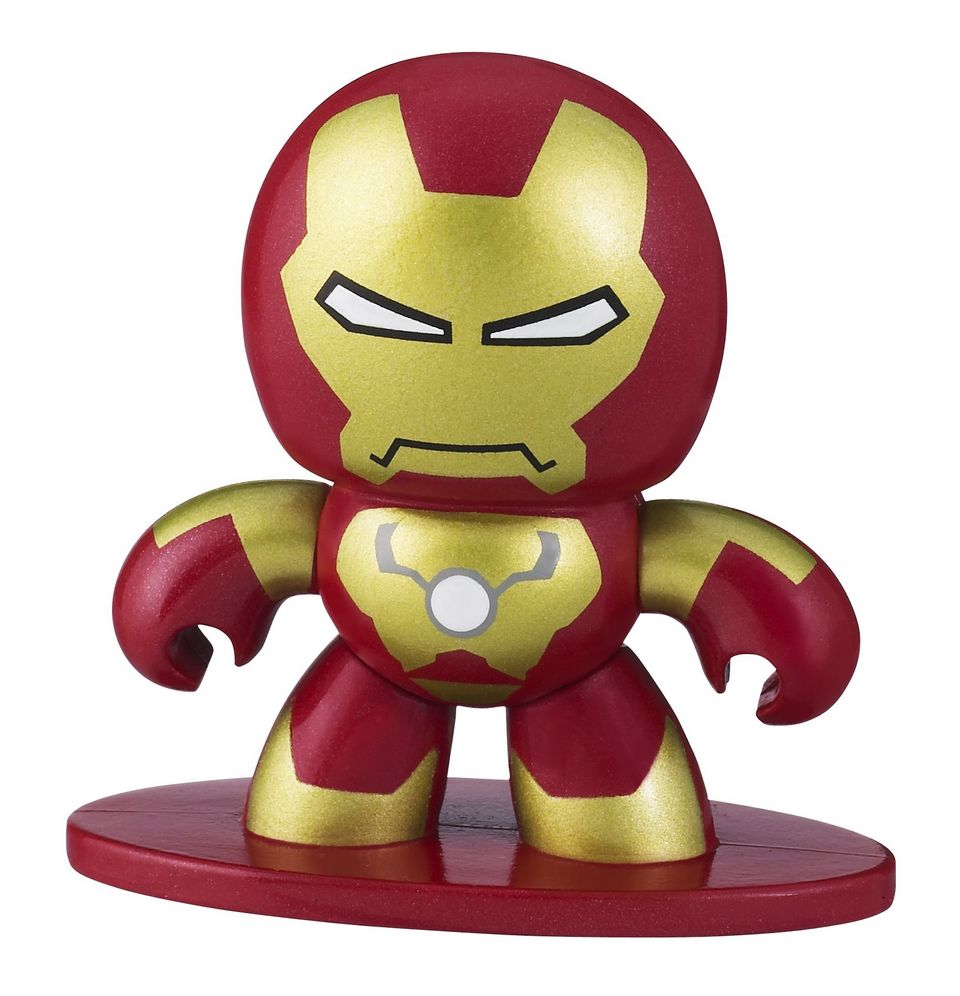