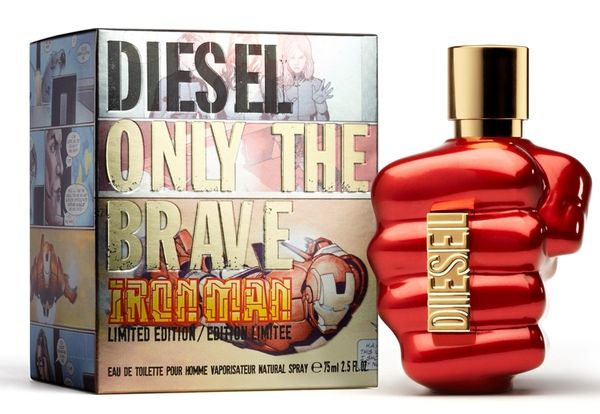 We don’t know what Diesel is thinking with their clench-fisted Only The Brave cologne, but tying a scent in with a comic book character just doesn’t make sense. When was the last time you saw comic book collectors who actually cared about how they smelled? I have exactly two friends who continue to collect comics now that we’re full-fledged adults. Neither of them like to smell good. Heck, they hardly take baths as it is. Let’s face it. This product is doomed.

Okay, I’m just kidding. Not all comic fanboys are as gross as the company I keep. In fact, some of them might even enjoy smelling like “lemon blossom, mandarin and coriander leaves, a heart of labdanum, black rose and lavender, and a dry down of amber, tolu wood and ebony wood” sometimes. We’re not sure if that’s how either Tony Stark (I always thought he just smelled like Bourbon) or his costume (which should smell like steel) strikes olfactory senses, but that’s the fragrance you’ll be rocking once you splash this under your helmet and breastplate.

The 2.5-ounce Only The Brave comes in a gorgeous red and gold clenched-fist bottle, lifted directly off Iron Man’s armor design. It will come in a shamelessly fanboyish box bearing a color print, displaying one of the Marvel hero’s early comic book appearances.  While it’s being timed with the release of the new Iron Man movie (slated to make its rounds in theaters on May 7), it doesn’t look like it has ties with the actual film franchise, so I doubt we’ll be seeing Robert Downey dowsing enemies with perfume from his robotic hands.  Which would have been awesome, by the way, since Mickey Rourke looks like he could use a fresher scent.

Produced in limited numbers, Diesel’s Only The Brave Iron Man cologne will be available mid-April, retailing at a price of $67.50.