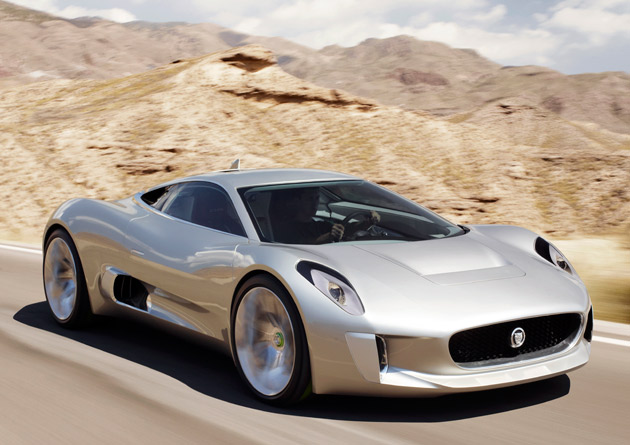 Jaguar just introduced a new electric car concept that hints at what the future could look like for luxury car owners. It’s called the Jaguar C-X75, a range-extended EV supercar that stretches the makeover into the leaping-kitty brand’s styling.

Yes, it’s still just a concept prototype.  The thing looks fit for the road, though, so don’t be surprised to see a lot of the technology here eventually sent down the production line.

The C-X75 runs on four 195-horsepower electric motors, one for each wheel, delivering a total 780 ponies and 1,187 lb-ft of torque.  Power is drawn from a plug-in Li-Ion battery pack, which can juice it for up to 68 miles.  Once the battery is depleted, two 96-horsepower micro gas turbines kick in, pumping extra juice into the battery and extending the vehicle’s range to 560 miles.  It can reach top speeds of up to 205 mph.

Body is made from aluminum, with swan-doors allowing entry into the two-seater, leather-lined cabin.  Seats are fixed, but the steering wheel, instruments and pedals can be adjusted to accommodate the driver.  Readouts can be viewed on three TFT displays that show interchangeable driver information.

Jaguar calls the C-X75 “one of the most beautiful Jaguars ever.”  Checking out those lines, that sounds about right.  It will be debuted at the currently ongoing Paris Motor Show.