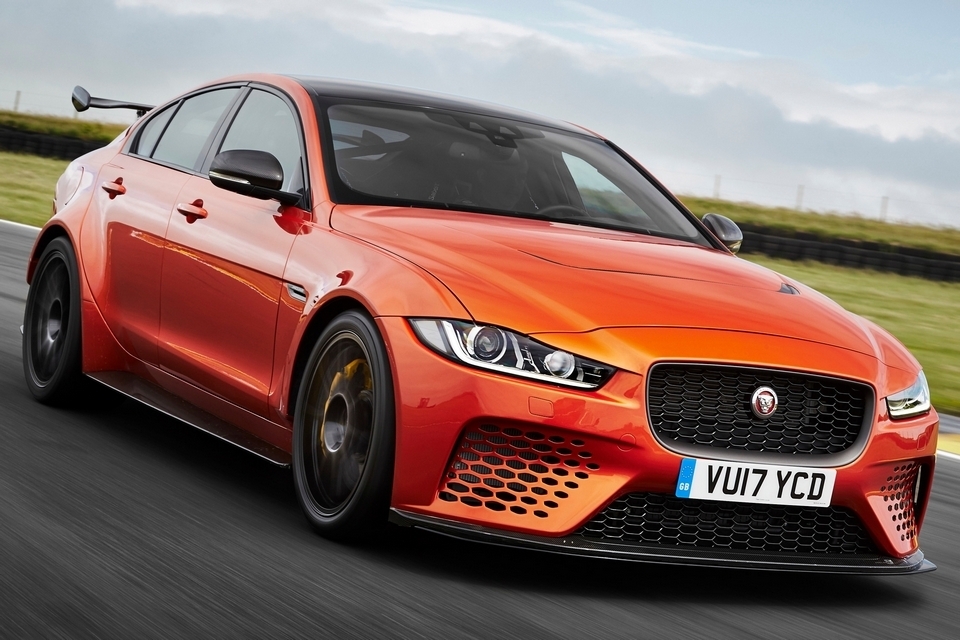 We’re big fans of the Jaguar XE, with its stylish good looks and sporty performance. It’s not, however, the kind of car you’re going to drive if you prefer sitting behind the wheel of a veritable speed monster. Instead, you’ll probably have a better time getting inside the Jaguar XE SV Project 8’s cabin.

A modified version of the award-winning XE sports sedan, the new vehicle gets tuned out, reworked, and retrofitted by Jaguar Land Rover’s Special Vehicle Operations division, turning the erstwhile sweet ride into a rubber-burning beast. And, yes, it packs enough power to replace the F-Type as Jaguar’s new performance flagship, making this a bona fide super sedan. 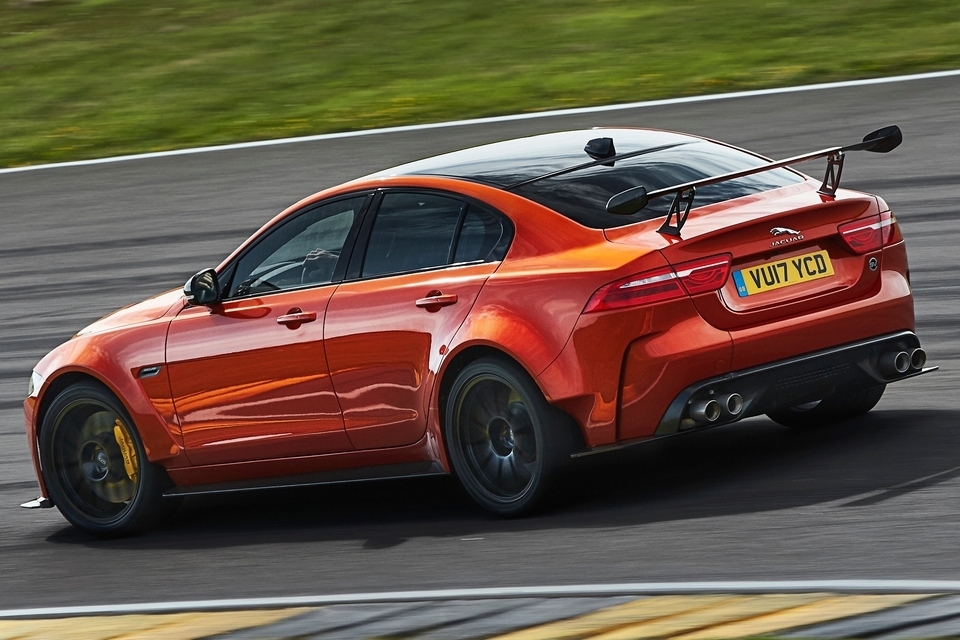 The Jaguar XE SV Project 8 trades in the original XE’s 3.0-liter supercharged V6 in favor of a 5.0-liter supercharged V8, which puts out 592 horsepower and 516 pound-feet of torque. Mated to an eight-speed automatic, the engine sends power to all four wheels, pushing the vehicle from standstill to 60 mph in just 3.3 seconds, all while raising the top speed to 200 mph. Yes, that’s not all that eye-popping compared to the crazier sports cars out there, but for a Jaguar, a sedan with those performance numbers is just a special rarity. 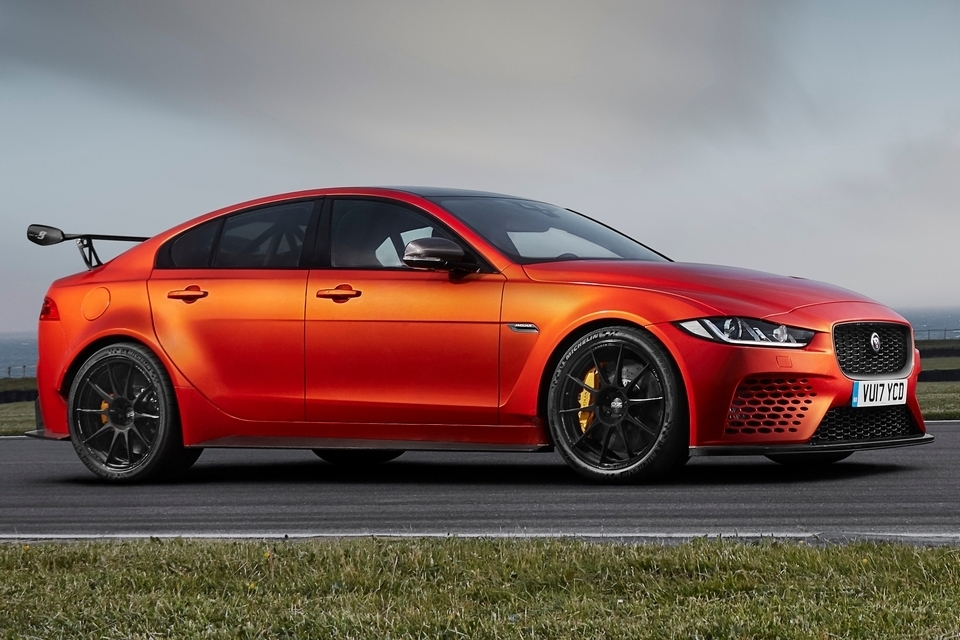 Of course, this isn’t just about raw speed and power. The vehicle also gets all-new carbon fiber bumpers, front fenders, hood, side skirts, front splitter, and rear aero wing to reduce the weight, with a slightly wider profile that gives the erstwhile conservative-looking car a much more aggressive style. That widened fender, by the way, was necessary because of the wider tires (265mm up front and 305mm in the back), which should give this speed demon the necessary grip on the road. Other performance enhancements include stiffer springs, retuned shocks, modified anti-roll bars, adjustable ride height (default height for the road and a lower one for the track), adjustable rear wing (you can angle it to either reduce drag or maximize downforce), and carbon ceramic brakes, all of which should come together to produce a car that can handle sharp corners at high speeds with veritable ease. 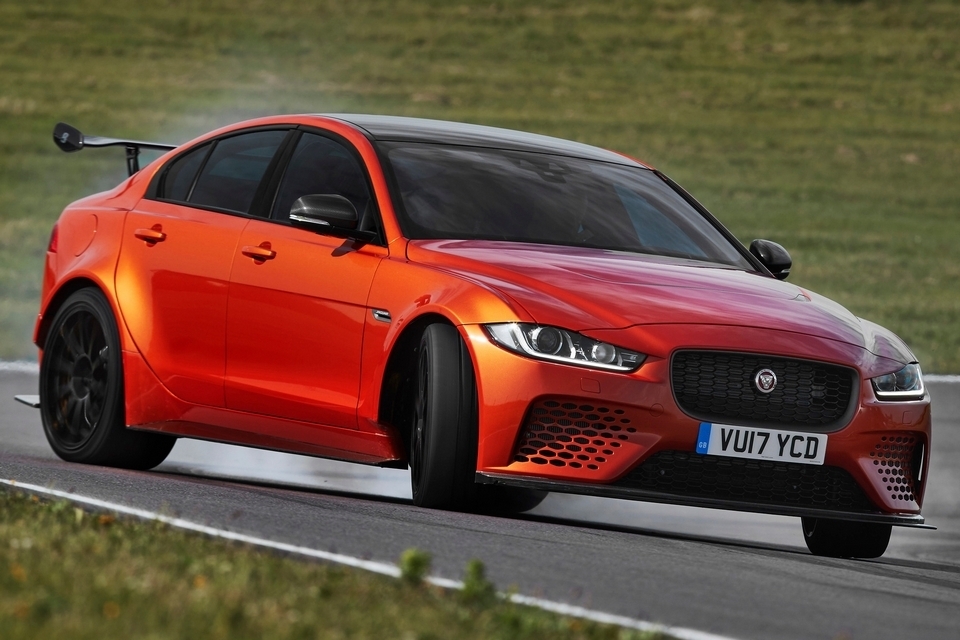 Inside, the Jaguar XE SV Project 8 retains the four-person seating layout as the original, although it now comes with magnesium-framed bucket seats out front and sculpted seats at the rear. There’s also an option to turn it into an actual race car inside, which removes the rear seats and replaces them with a roll cage, along with four-point harnesses and a fire extinguisher system. The front bucket seats, on the other hand, get swapped out for carbon fiber counterparts. 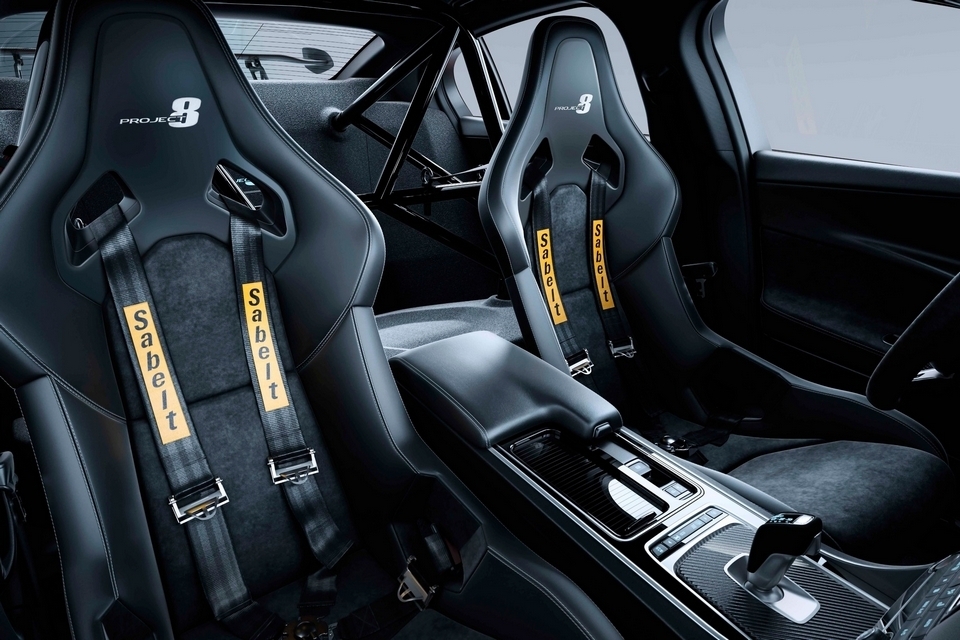 Of course, the interior gets all the usual Jaguar luxuries, so you can have the whole place kitted out in carbon fiber and Alcantara. Inside, it gets a lever similar to the one on the F-Type, which allows you to do manual shifting for a more sporty driving experience. And, yes, it gets a load of creature comforts in tow, from climate control and LCD displays to 4G Wi-Fi and a 380-watt surround sound system.