JeanPants: Because Boxers Look Good In Denim, Too 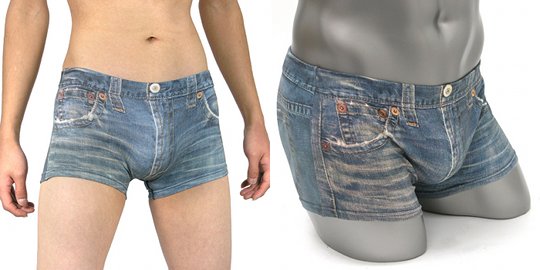 We’re not sure whether to file this under “cool” or “just plain odd.”  Then again, isn’t that how we often feel when seeing products popularized in Japan?  At any rate, we’re talking ’bout the JeanPants — denim underwear with a big bulge right on the crotch.

First, about the bulge.  I actually don’t know if that’s an intentional part of the design or a result of some photographer getting creative.  My guess is the former — male underwear definitely sounds more awesome with a built-in bulge in tow (although they’re peddling this as a unisex garment). 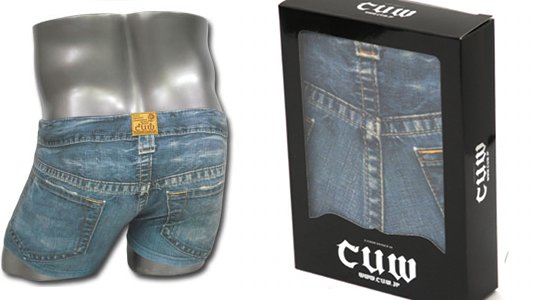 The JeanPants is a slim-fit pair of boxer shorts made with a denim material (or what looks like some type of denim, anyway).  Not only that, but the denim is also distressed, giving it that “worn and well-used” look similar to that ancient pair of restored jeans you keep in a special place in the closet.

While it looks like denim pants cut up into short shorts, it’s probably a lot closer to cut-up pajama jeans, since neither the buttons, the belt loops nor the pockets look like they’re functional.  We’re not sure if you can get away wearing just the undergarment without a pair of pants over it , but it sure looks a lot less indecent than just sporting regular cotton whities.

Made by Japanese clothing brand CUW, the JeanPants can be ordered in two sizes: large and medium (the waist, not the bulge — I think).  It’s available from importer Japan Trend Shop, priced at $61.