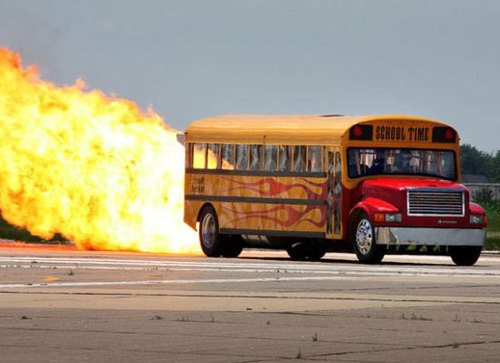 If Otto Mann ever had enough cash to rig Springfield Elementary’s school bus, we imagine it will look something like this: The School Time Jet-Powered School Bus.  Except instead of flames painted on the side, he’d have a giant 80s-era Metallica photo (you know, right before they became douchebags) plastered all over.  Gnarly.

Built by Paul Stender and his team from Indy Boys Inc, the 35-foot long bus was actually overhauled to the point that it only contains 5% of its original parts.  According to Paul, a regular bus like the ones used in schools all over America wouldn’t have been able to withstand the demonic hardware he crammed into the thing. As a result, his custom-made replacements used metals more commonly employed in aircrafts to keep the fire from swallowing it after a single drive around the corner.

And what demonic concoction lies within School Time?  A 42,000-horsepower J-79 jet engine from an F4 Phantom fighter plane, apparently, which pushes the yellow and red coach to a blistering speed of 367 mph.  Not only that, it bellows flames up to 80 feet long from the rear, torching everything that mistakenly decided to tailgate it.

Of course, this isn’t a real school bus, since we doubt they’ll allow it to operate on any road, much less a school.  Plus, we doubt any school district can afford to run the behemoth, since it consumes fuel at a rate if 150 gallons for every quarter mile.

However, they do tour The School Time Jet-Powered School Bus for display and, according to Paul, they’ve even taken it to some schools to show children “there’s more to life than sitting in front of computers”  (like, you know, making large flames come out of school buses and stuff).  You can learn more about it, along with the team’s other vehicular monstrosities, from their website below.