Last year, Mattel made a big splash with the Jurassic World Fallen Kingdom toy line, with its collection of dinosaurs even winning the 2018 Toy of the Year Award for action figures from the Toy Industry Association. This year, the dinosaur onslaught continues with the Jurassic World Dino Rivals, a new collection of articulated dinosaurs of various sizes and capabilities.

That’s right, you don’t have to make do with dinosaurs in fixed poses, as these things can walk, swing their tails, and even bite each other’s head silly, among other actions. Whether you just want a few dinosaurs to show off on the shelf or you want to build your own tabletop Jurassic Park, the figures in this line should offer some of the best-looking and best-playing options available today. 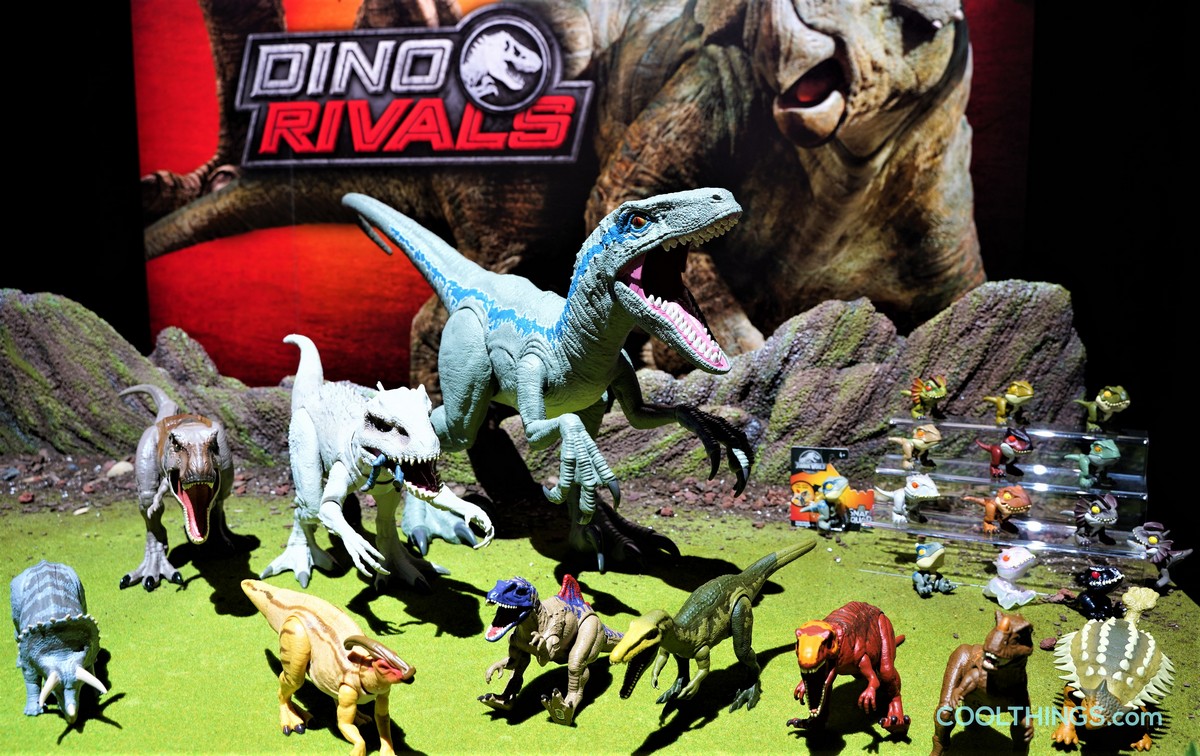 The Jurassic World Dino Rivals consists of 20 primary dinosaur figures, four human action figures (with miniature dinosaur companions), and Owen’s ATV (with an Owen figure and a Dracorex dinosaur). That means, it’s a lot of sets, so prepare to bust your wallet if you’re planning on checking off the entire collection. Each set comes with a Dino Rivals collector card, detailing the dinosaur’s battle stats and attributes, so here’s hoping to a full-on Jurassic World card game sometime in the near future. 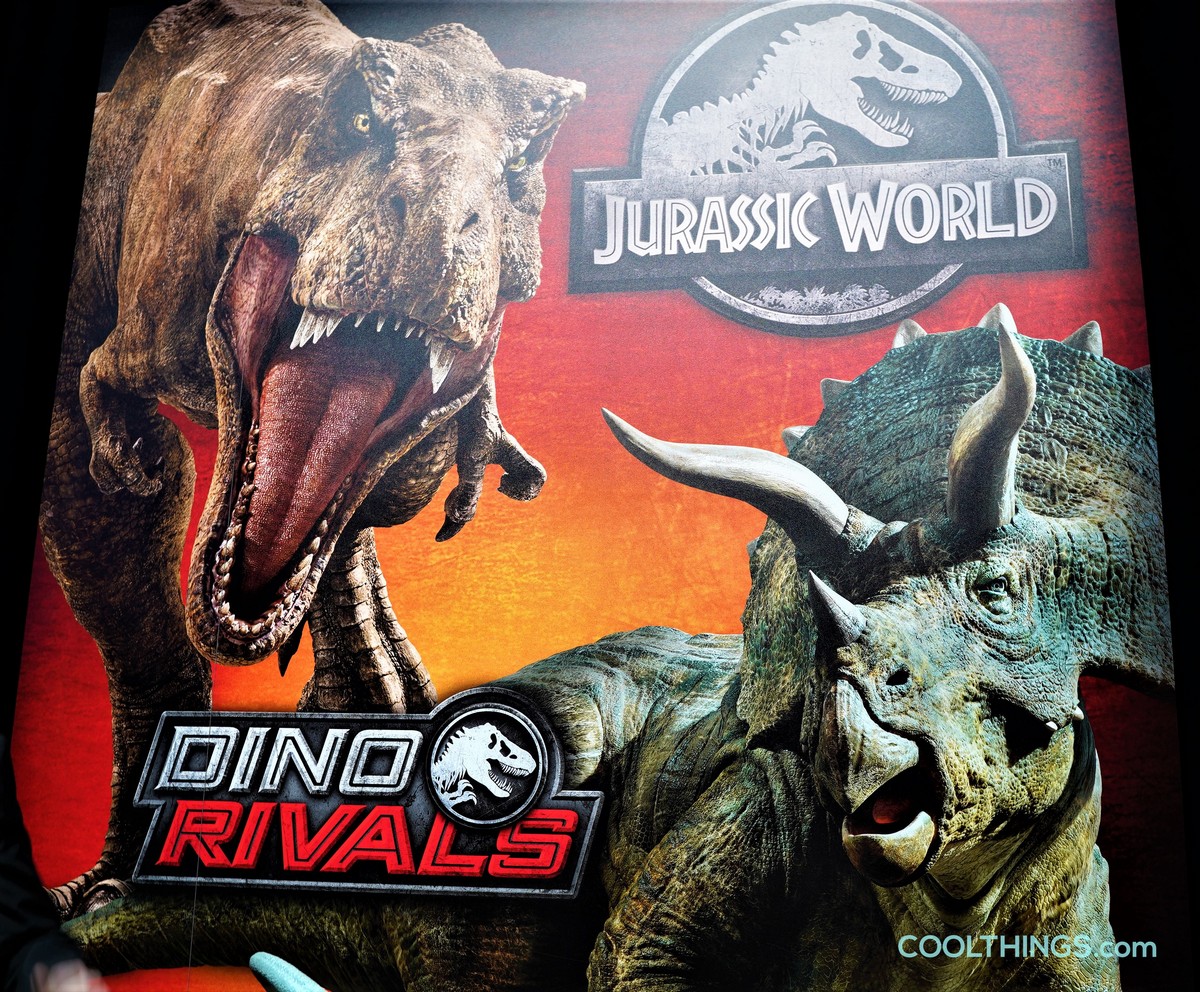 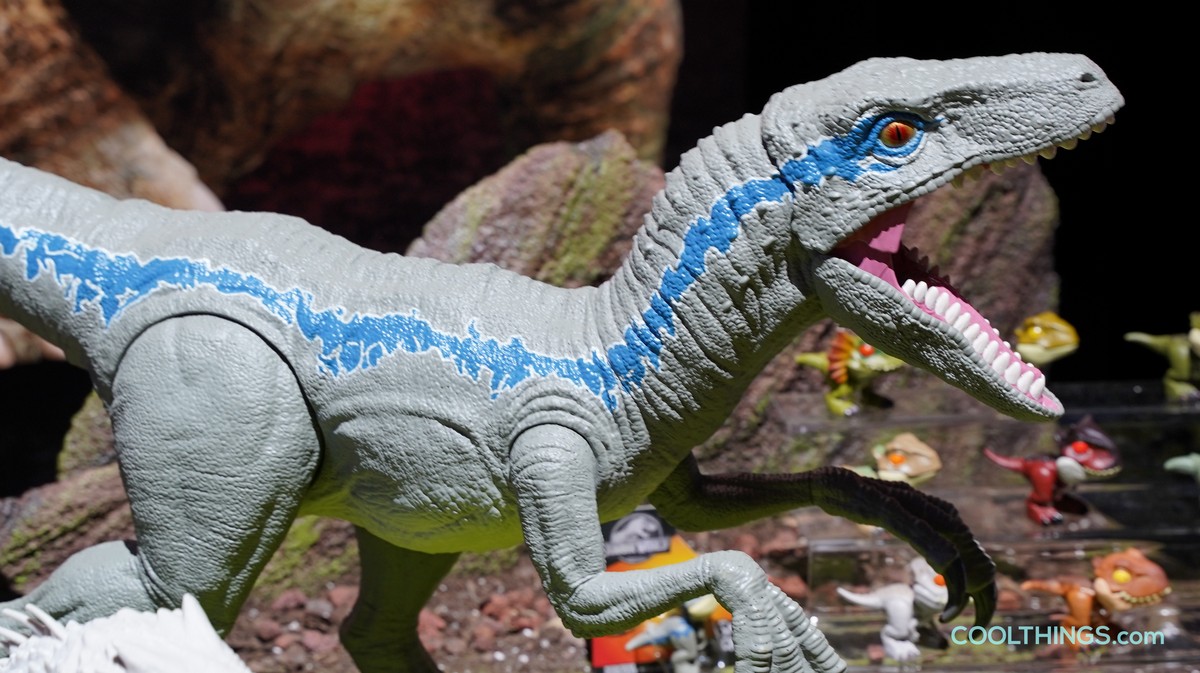 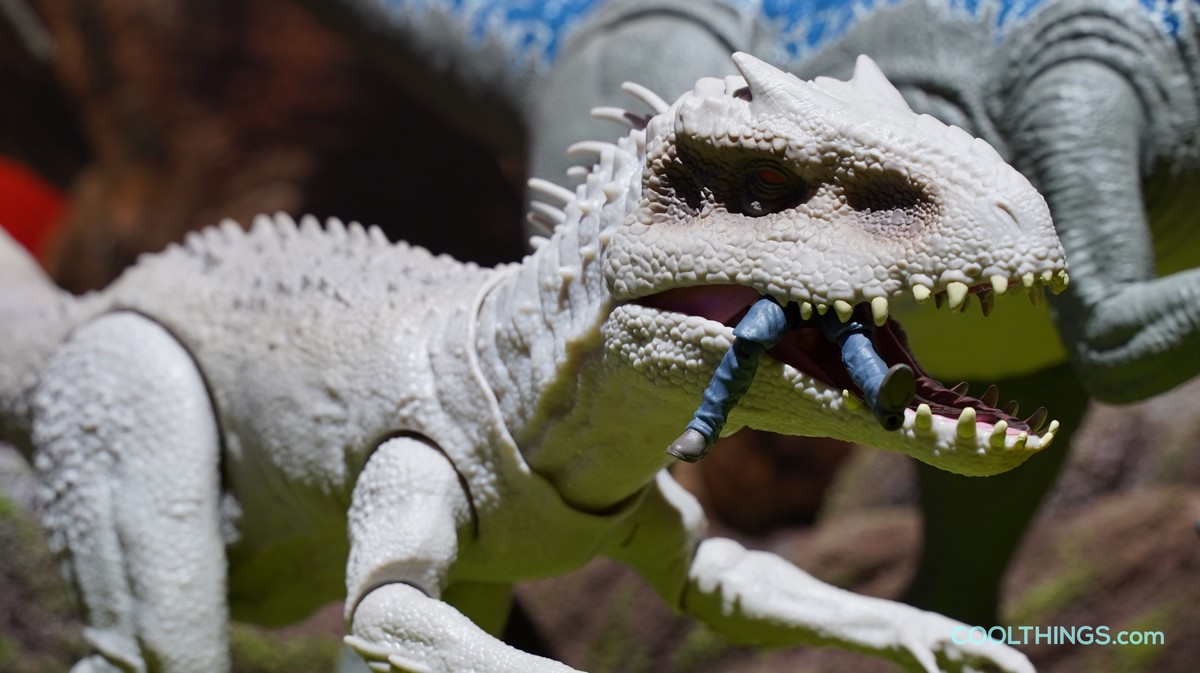 Lastly, the main dinosaur collection can be divided into five groups:

Dinosaurs included in this category are the kind that come together as a herd and attack in packs. That’s why they’re affordably, so you can, presumably, buy multiple units of the same action figure, in order to complete an adequately-sized prehistoric dino pack. Six dinosaurs come in this category, all of whom are articulated, although there are variations with just how much. The Attack Pack Velociraptor Delta, for instance, has articulation on the legs, shoulders, and jaw, while the only movement available to the Attack Pack Protoceraptops are found in its four legs. Other dinosaurs in the category include a Rhamphorhynchus (those flying dinosaurs), a Dracorex, a Coelurus, and a Herrerasaurus.

Four dinosaurs appear in this category, all cast as medium-sized action figures, namely the Concavenator, the Pteranodon, the Triceratops, and the Parasaurolophus. All four come with articulations on the tail, legs, and shoulders (wings, in the case of the Pteranodon), with different models getting articulation either in the jaws or the neck. Each has two action buttons, one in the front for a head strike (either chomping its jaw or ramming its head) and one in the back for a tail strike.

A bigger version of the Dual Attack line, the dinosaurs here are more of the larger variety, making them look more menacing and giving their attacks a scarier feel. Two dinosaurs are included in the category, namely a Suchomimus and a Stegosaurus, both sporting similar articulation as their smaller siblings, complete with dual action buttons that trigger either a head strike or a tail strike. 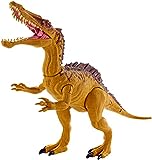 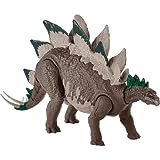 Six dinosaurs are included in this category, namely a Monopholosaurus, a Velociraptor Blue, a winged Tapejara, a Dimetrodon, a Styrocosaurus, and a Stygimoloch Stiggy. Instead of head and tail attacks as those on the Dual Attack line, the action figures here only come with one attack each, which can be triggered by pressing a designated area on the body (it’s different for every dinosaur). The attack also varies depending on the dinosaur, with the Monopholosaurus trying to bite off its enemy, the Styracosaurus trying to stab you with its horn, and the Tapejara combining both a bite and a slapping strike of its wings. 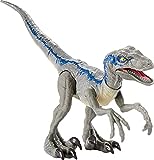 Two figures that come in the Dino Rivals line don’t fall in any of the above categories, namely the Bite N’ Fight Tyrannosaurus Rex and the Indoraptor. The former appears to be a brand new figure, with articulation on the legs, tail, shoulders, neck, head, and jaws, with a button in front making its head lunge forward, take a chomp, and turn approximately 90 degrees and a second button in the back causing the tail to swing. And yes, you can press both buttons at the same time for maximum action. The Indoraptor, on the other hand, is just a rerelease of the original Jurassic World Indoraptor, albeit in new Dino Rivals packaging. If you already own that, you can skip this one without missing anything. 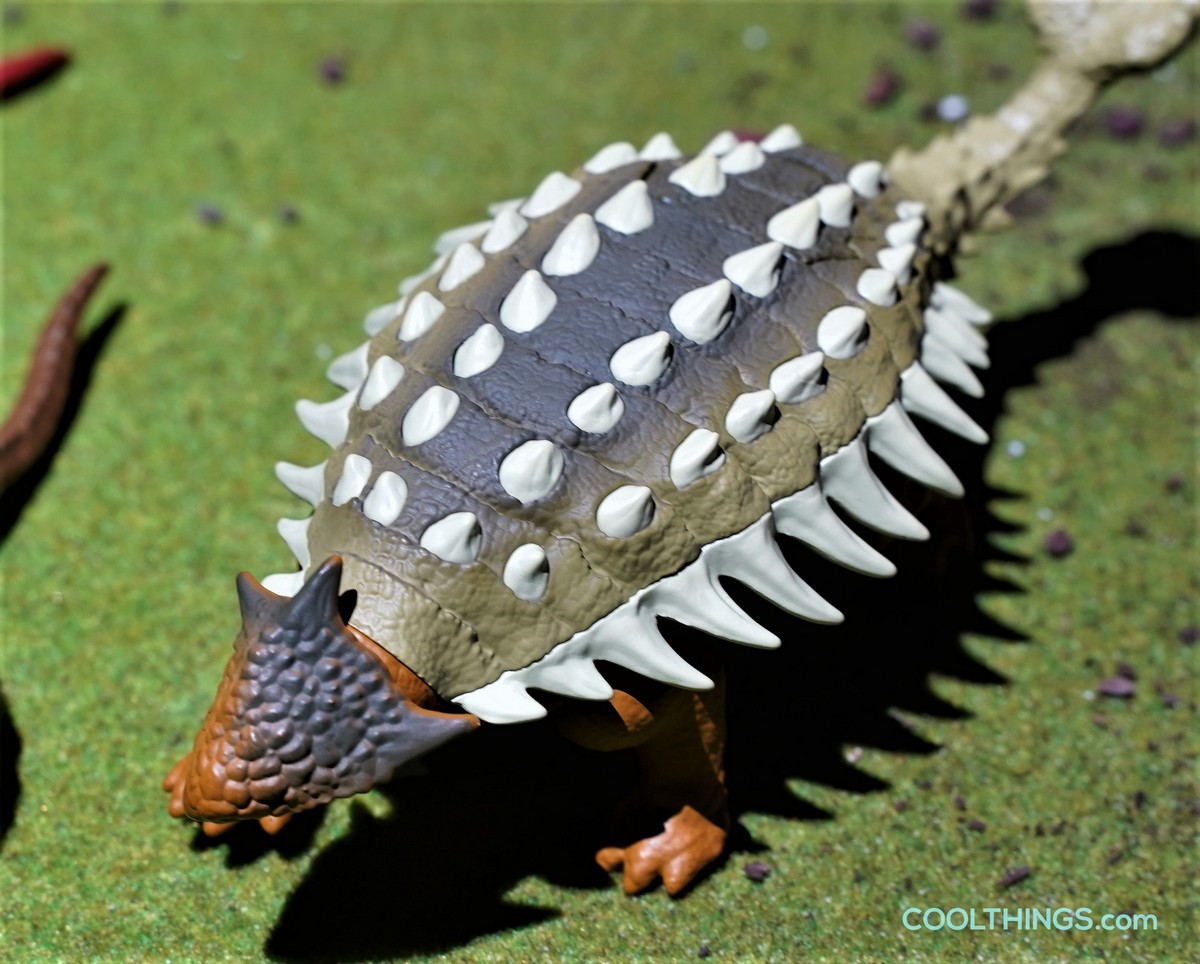 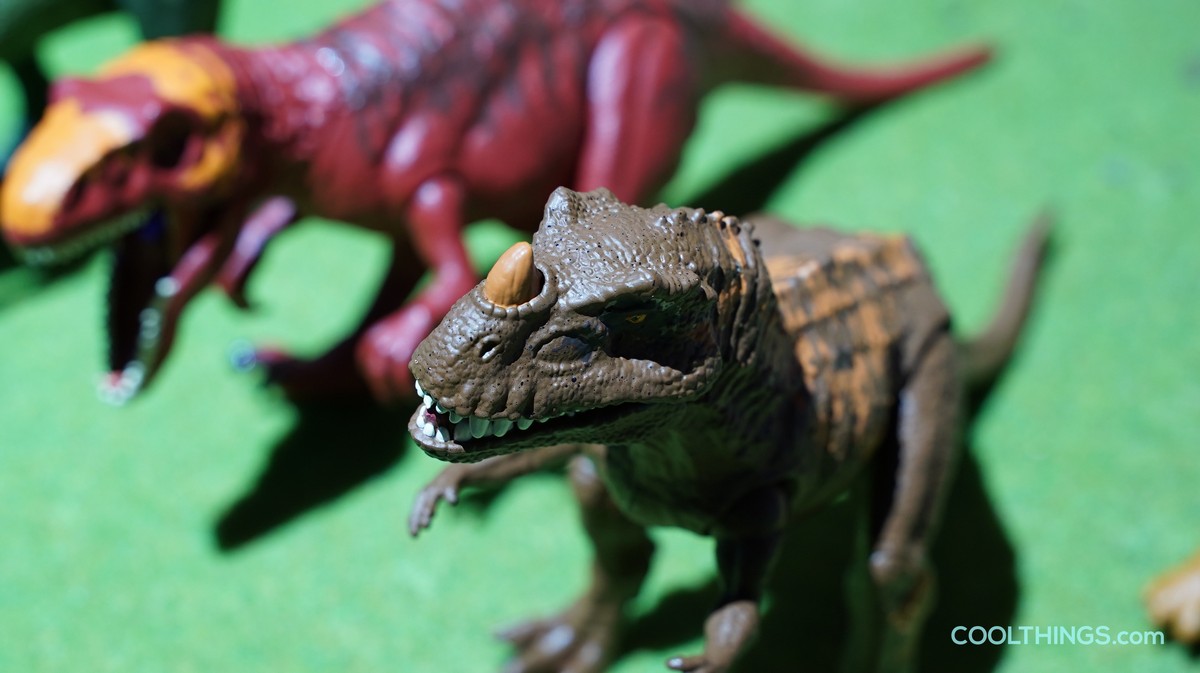 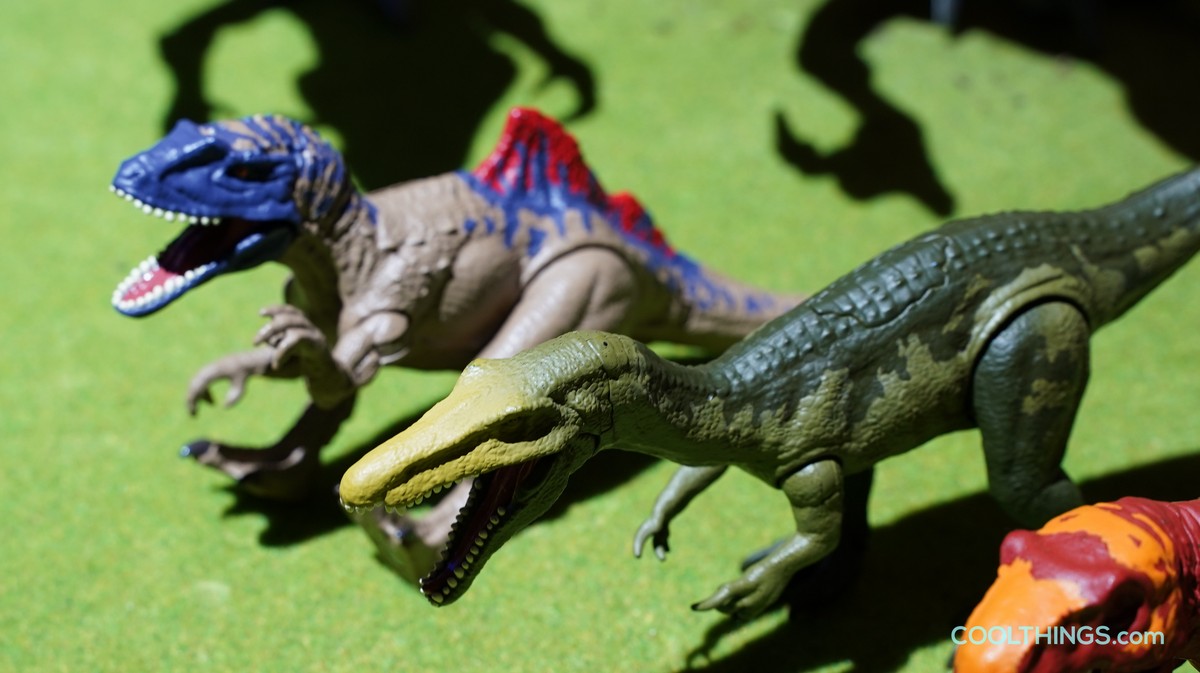 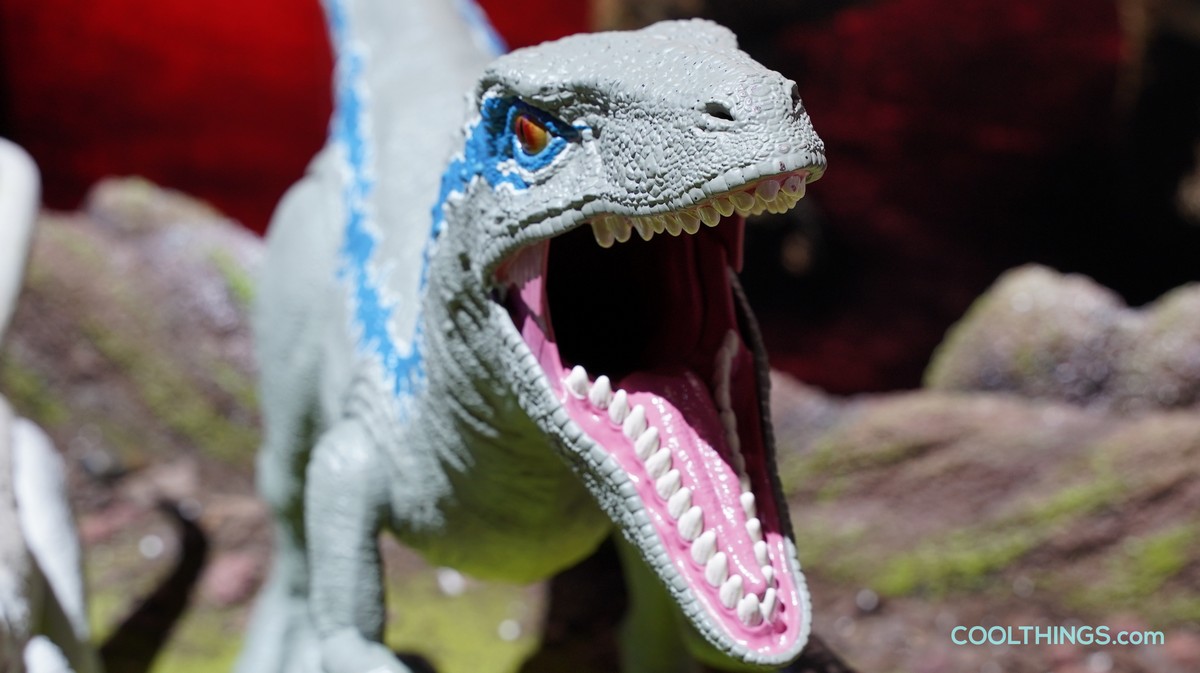 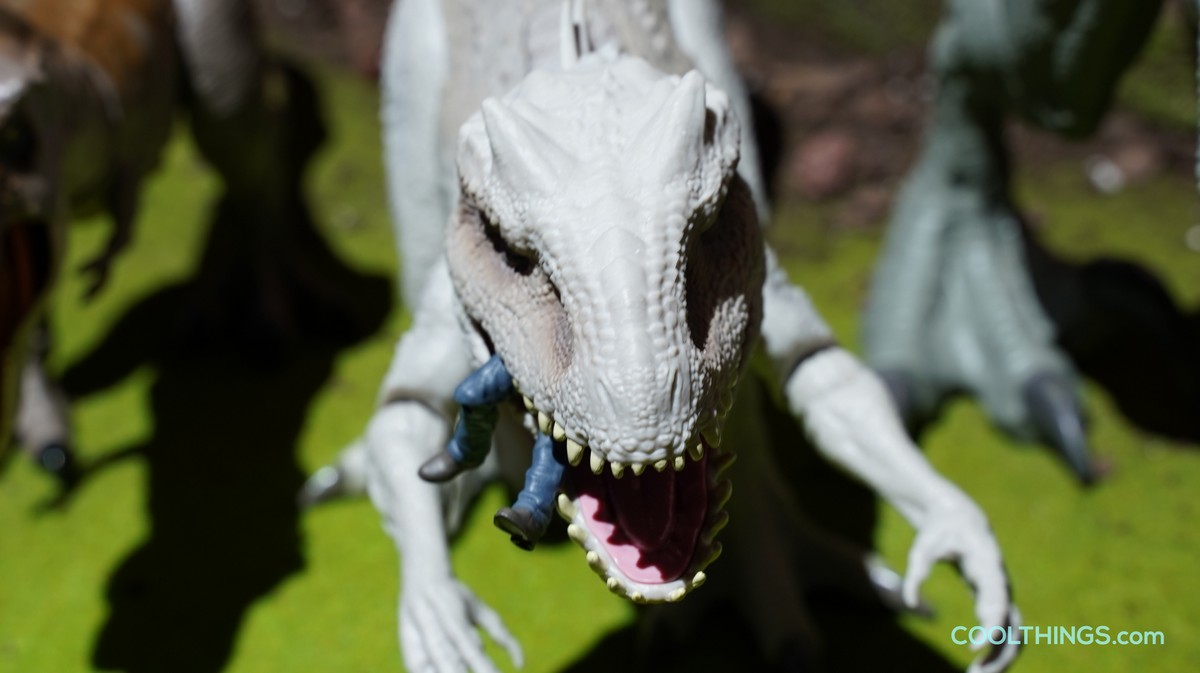 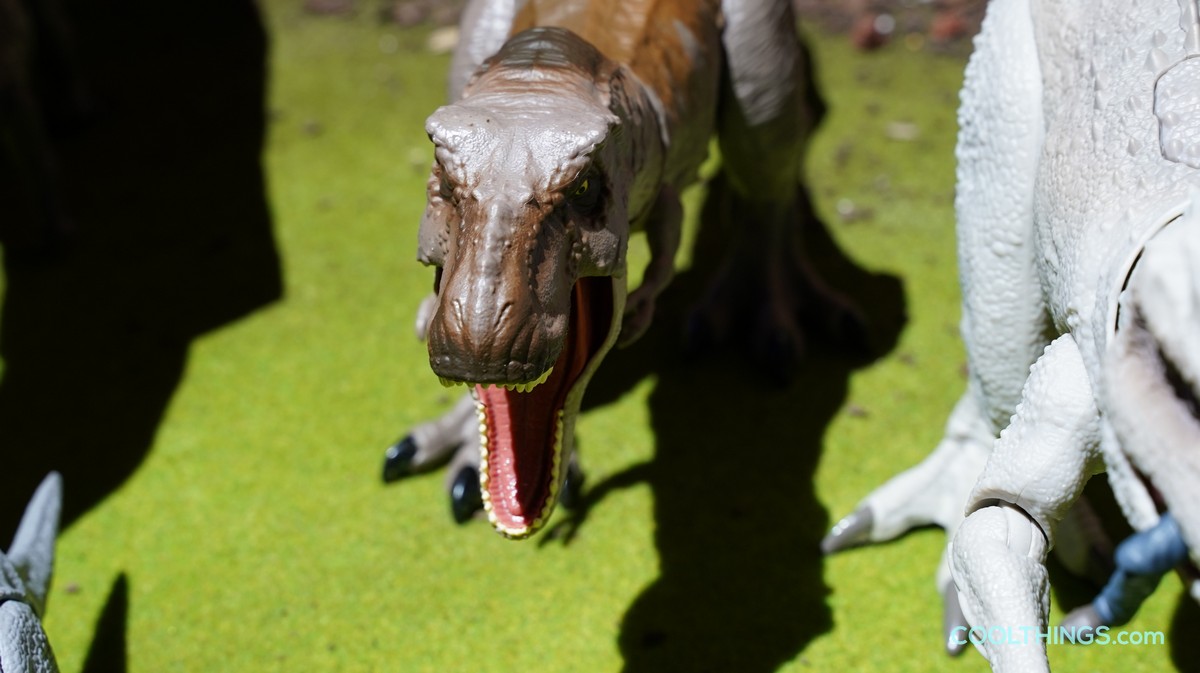 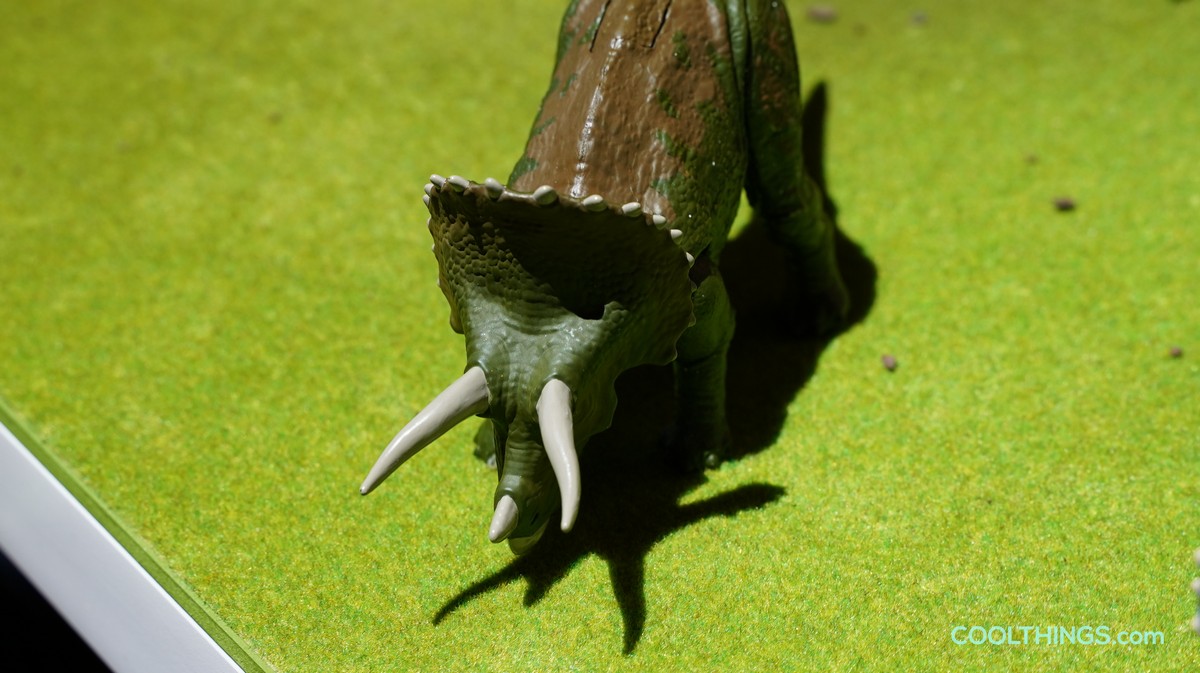 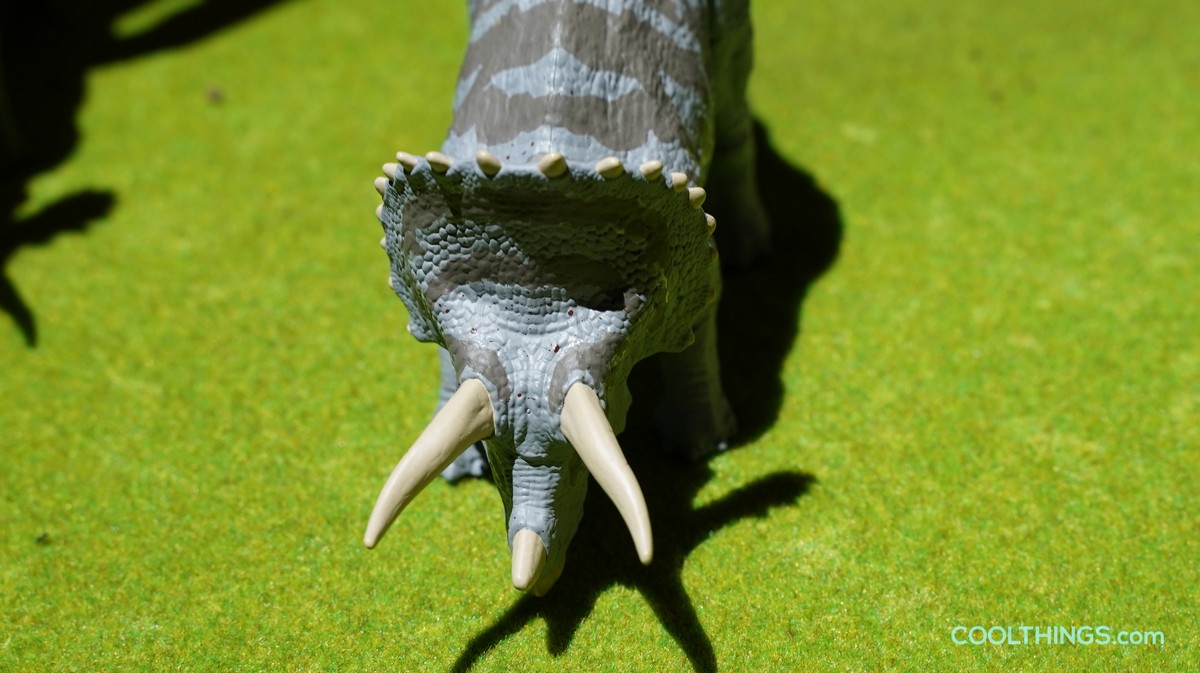 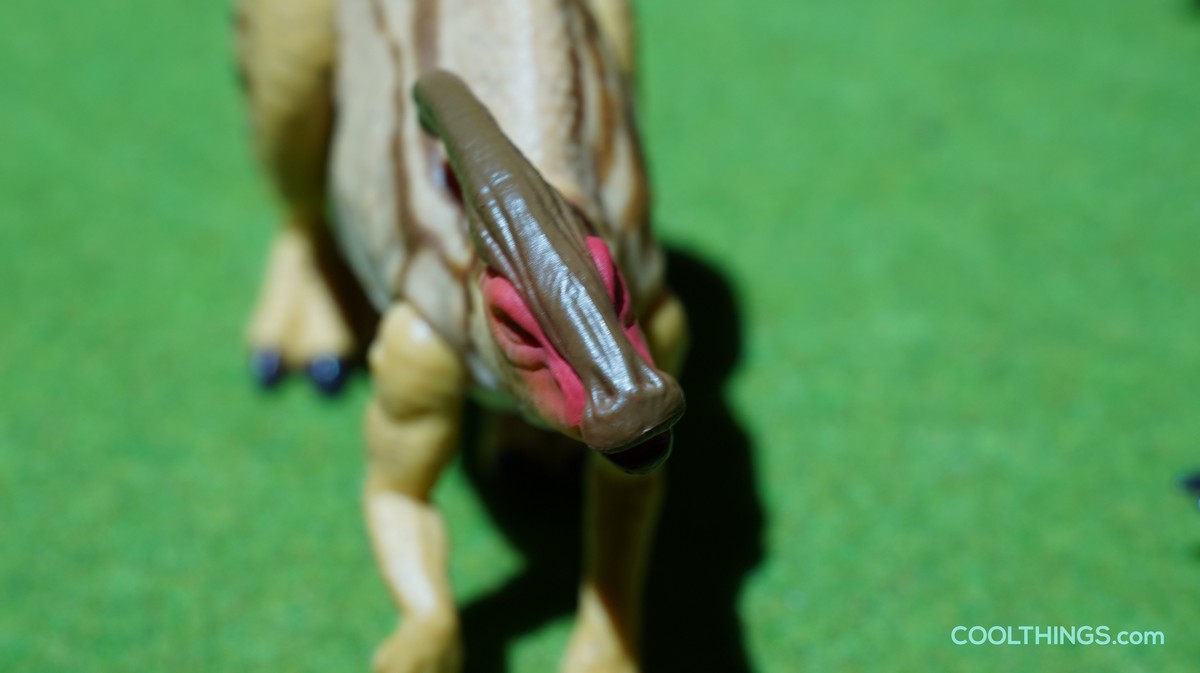 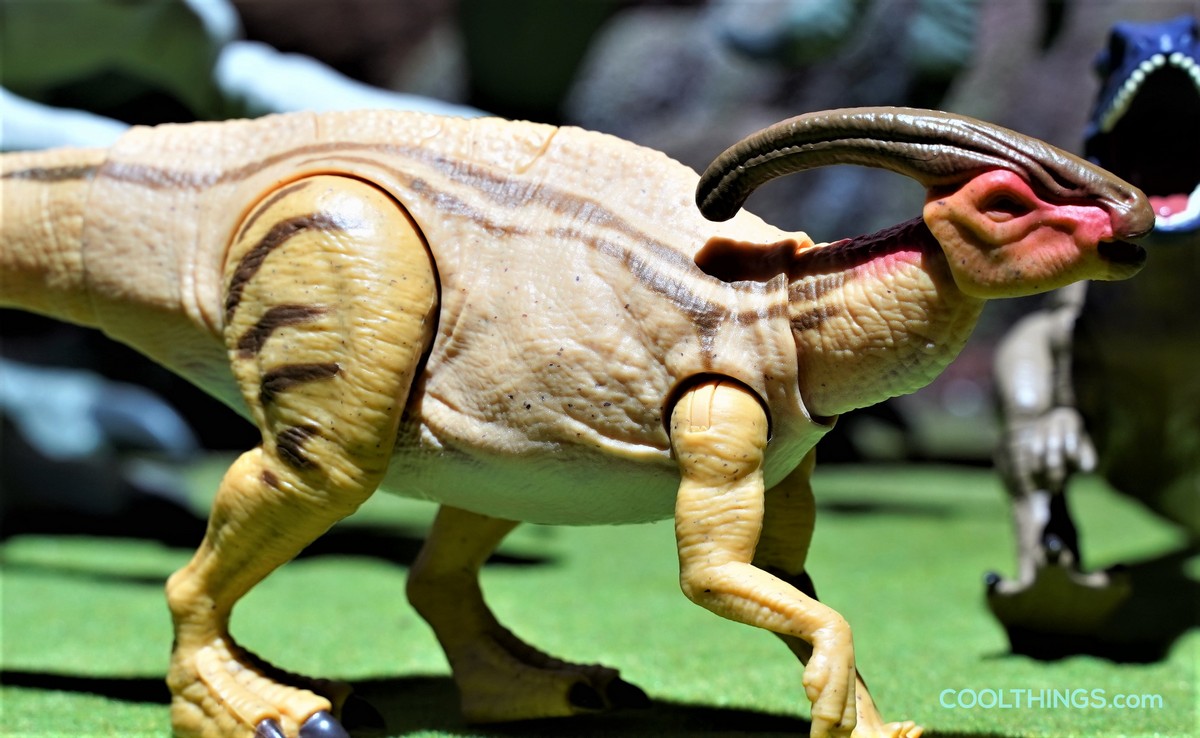 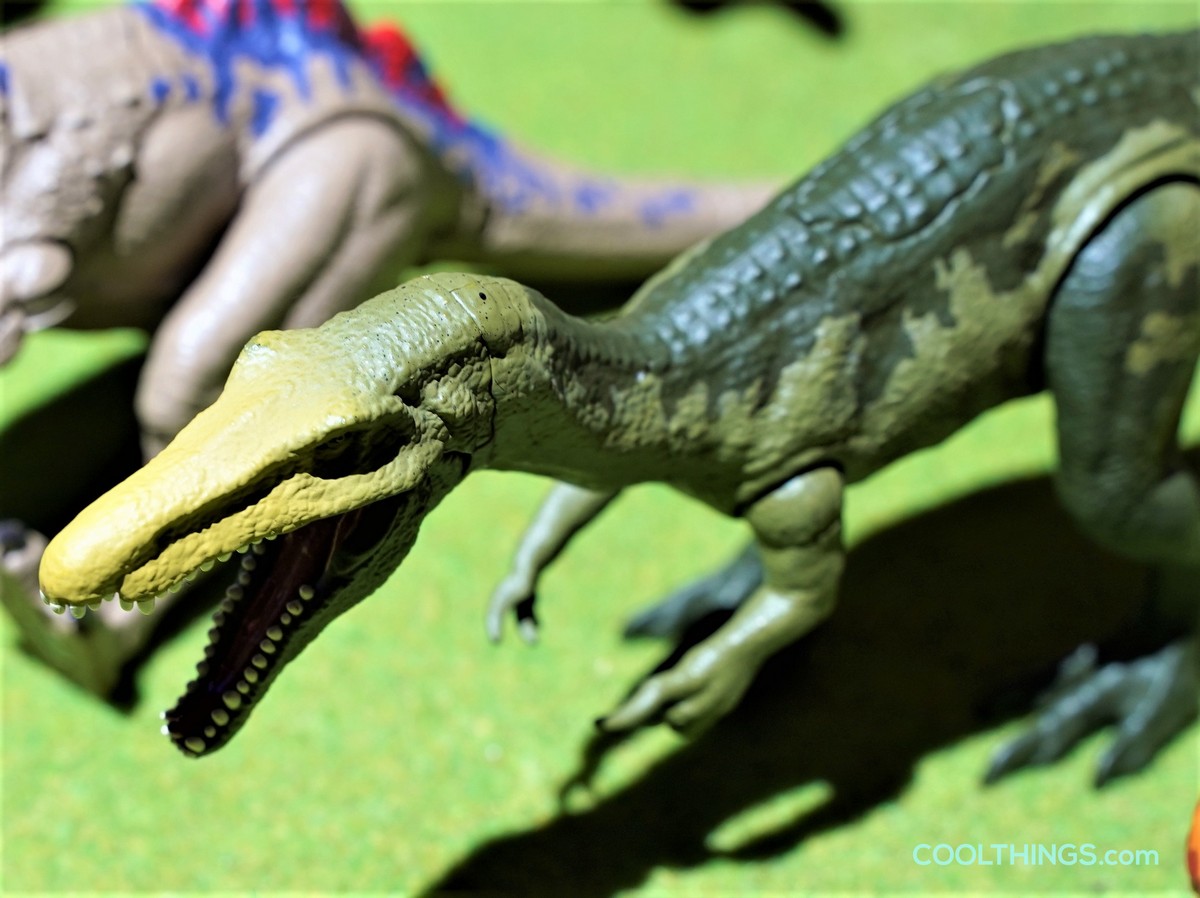 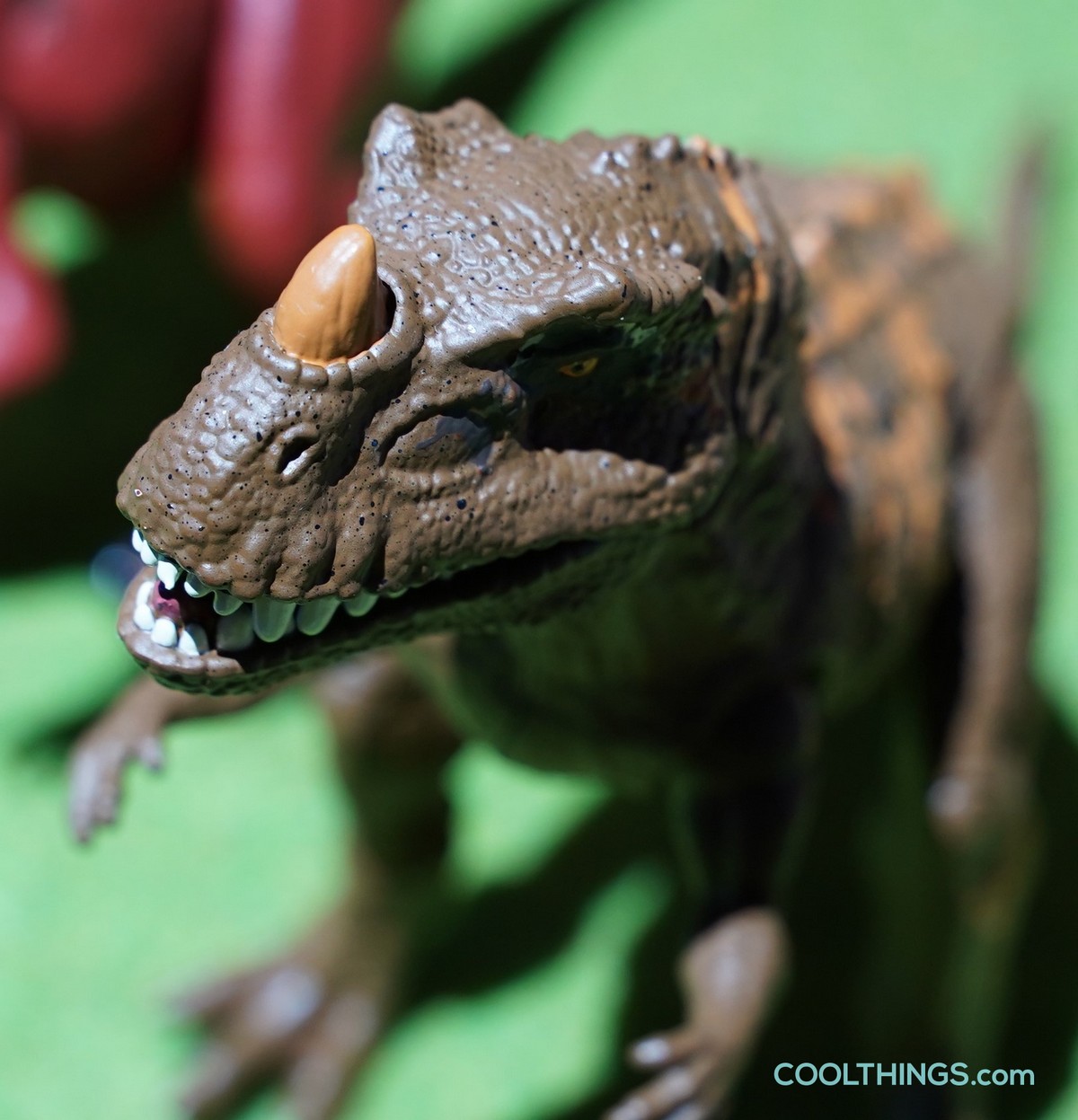 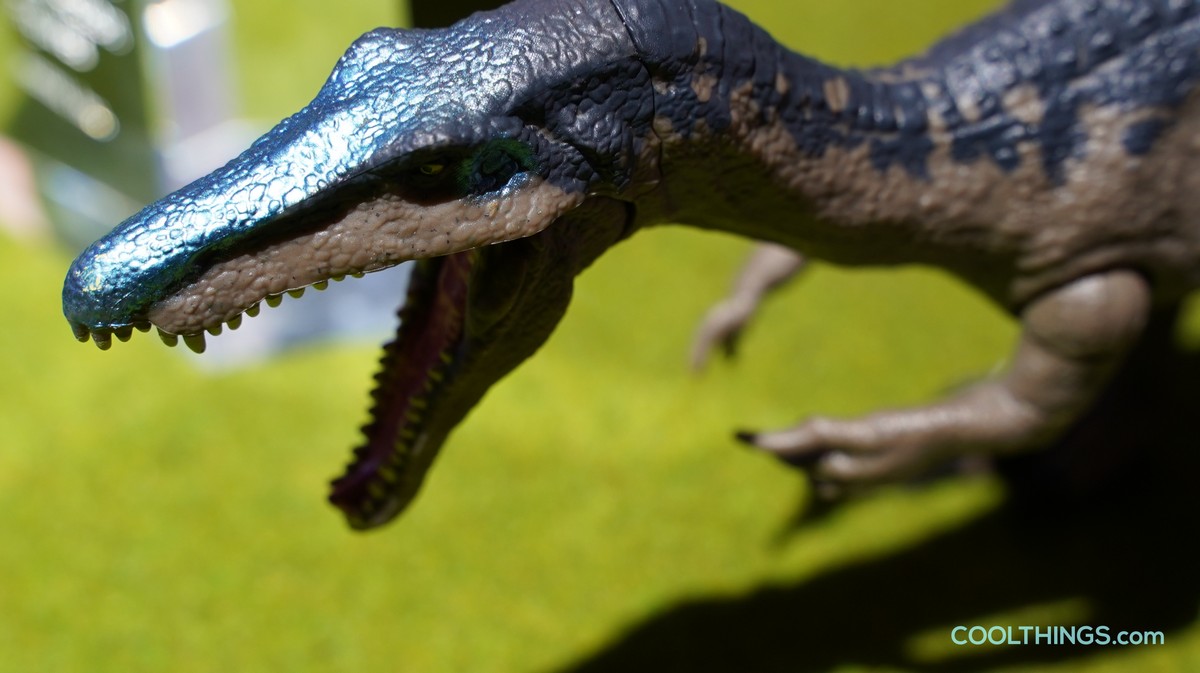 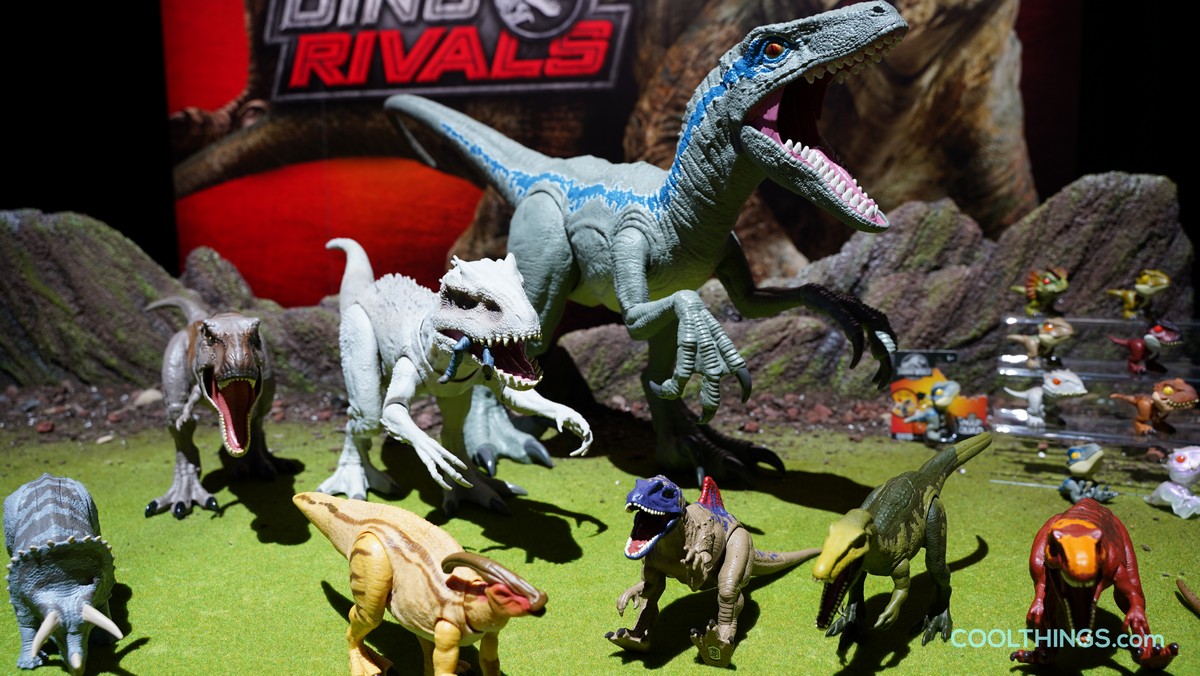 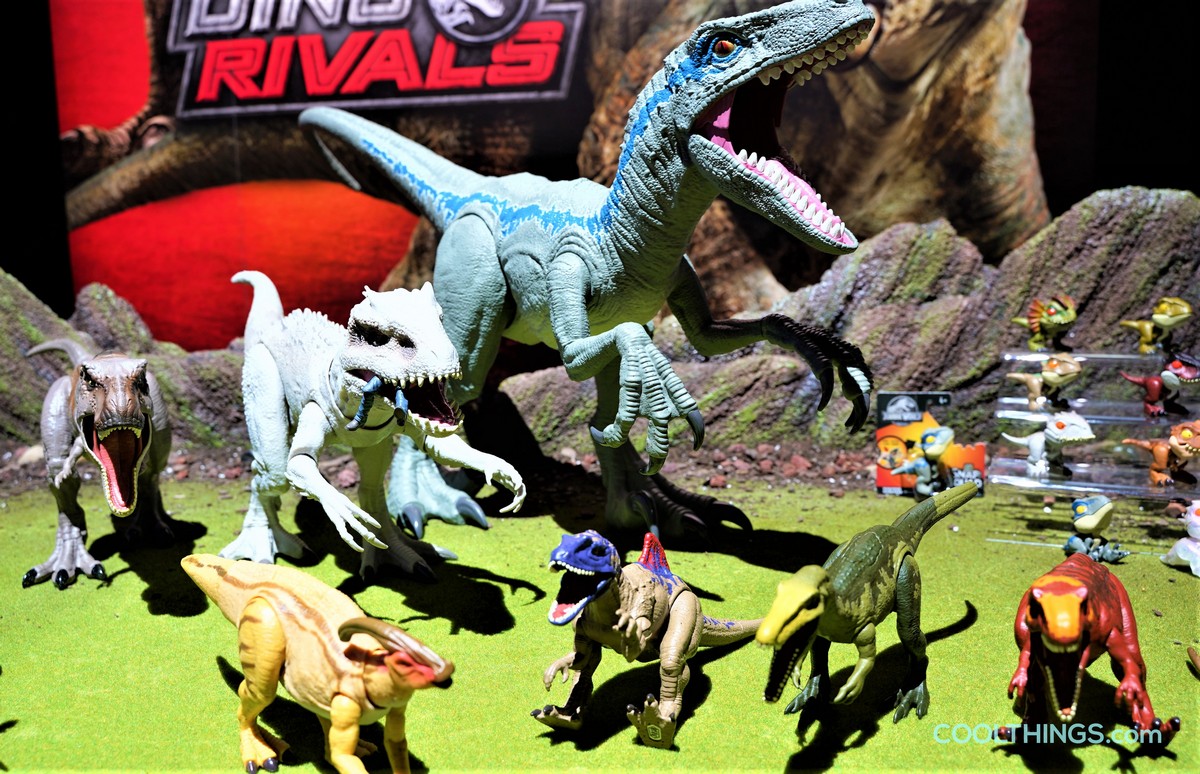 In case you’re wondering about the tiny dinos in the pictures, those aren’t actually part of the Dino Rivals line. Instead, they’re all part of Mattel’s Jurassic World Snap Squad line, which cast the prehistoric beasts as adorable desktop figures. 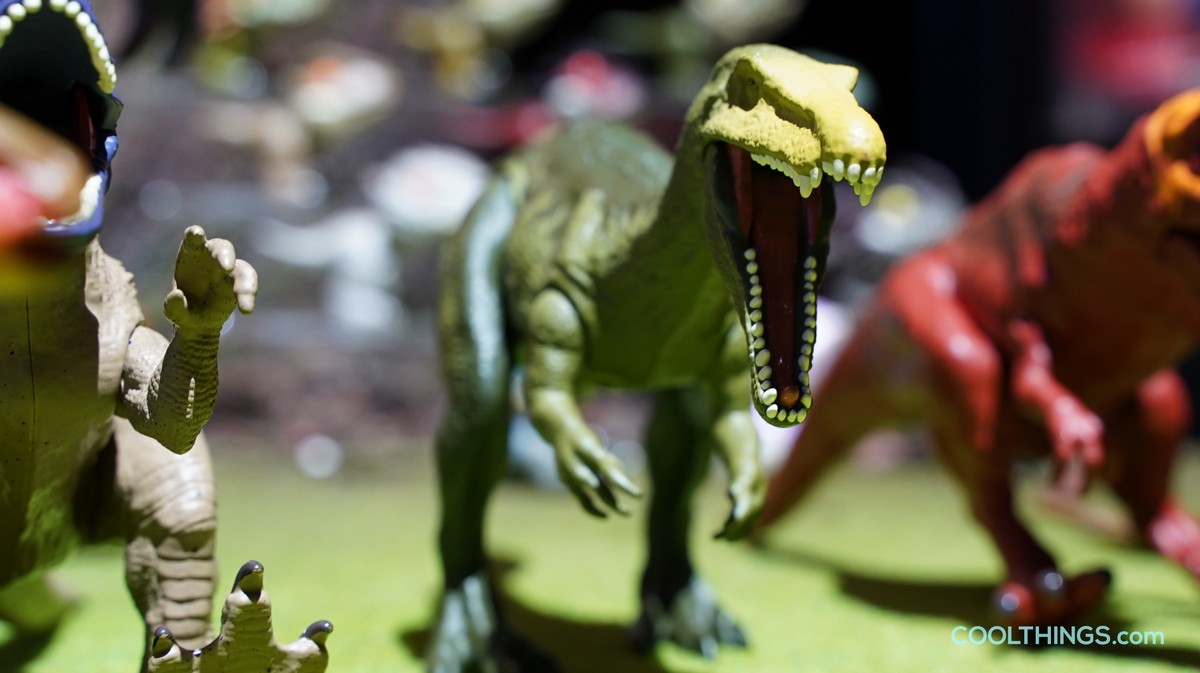 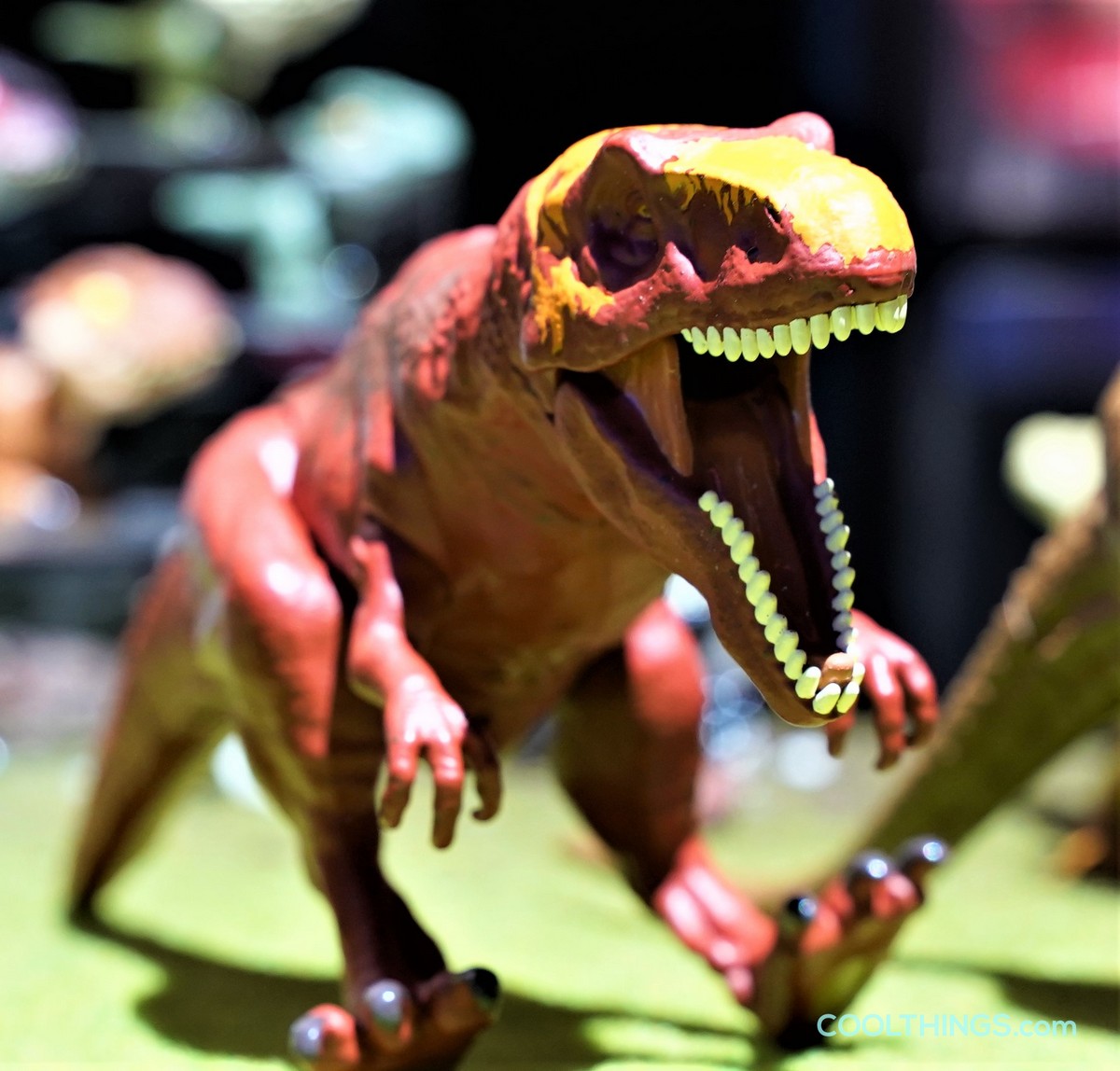 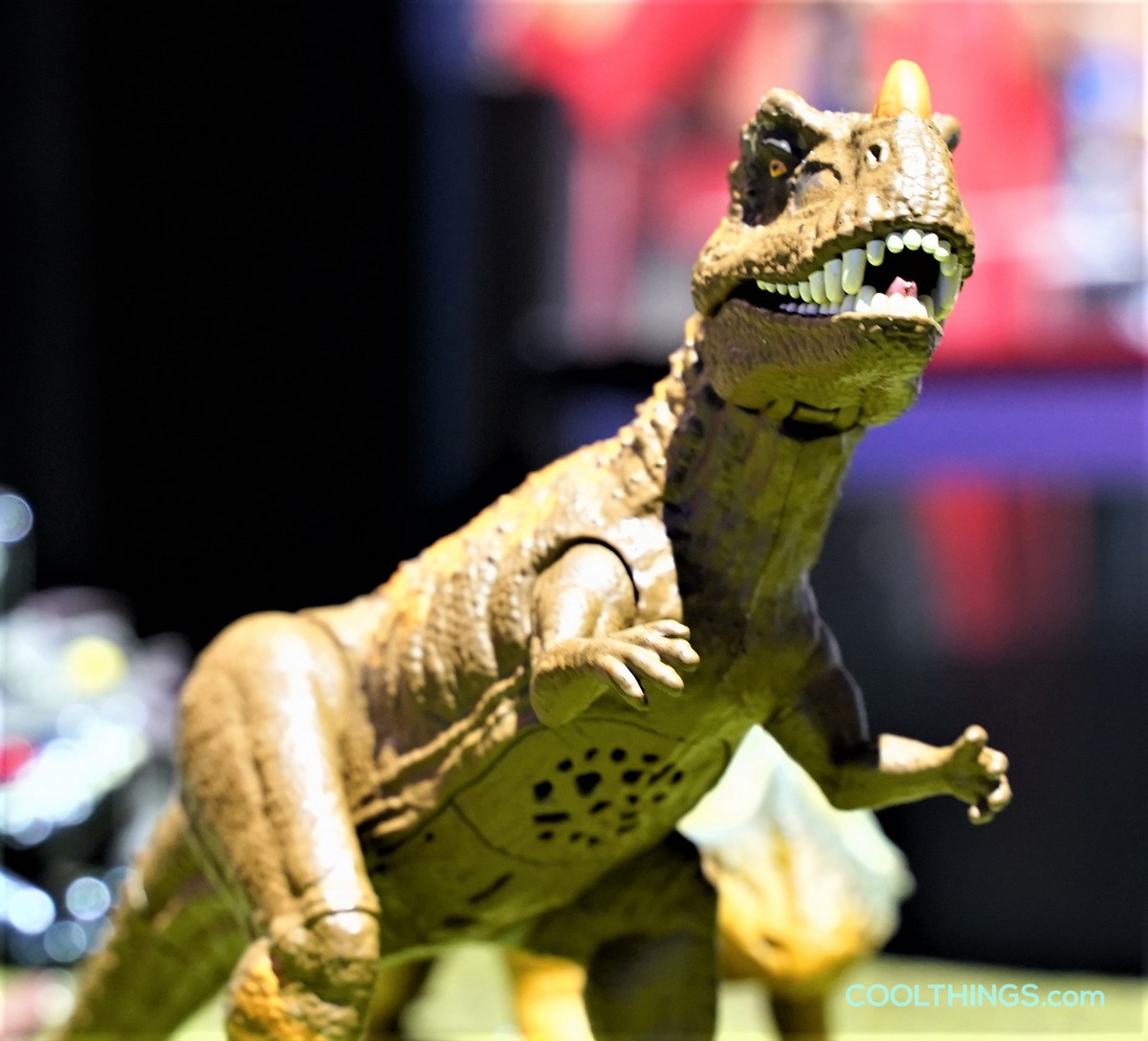 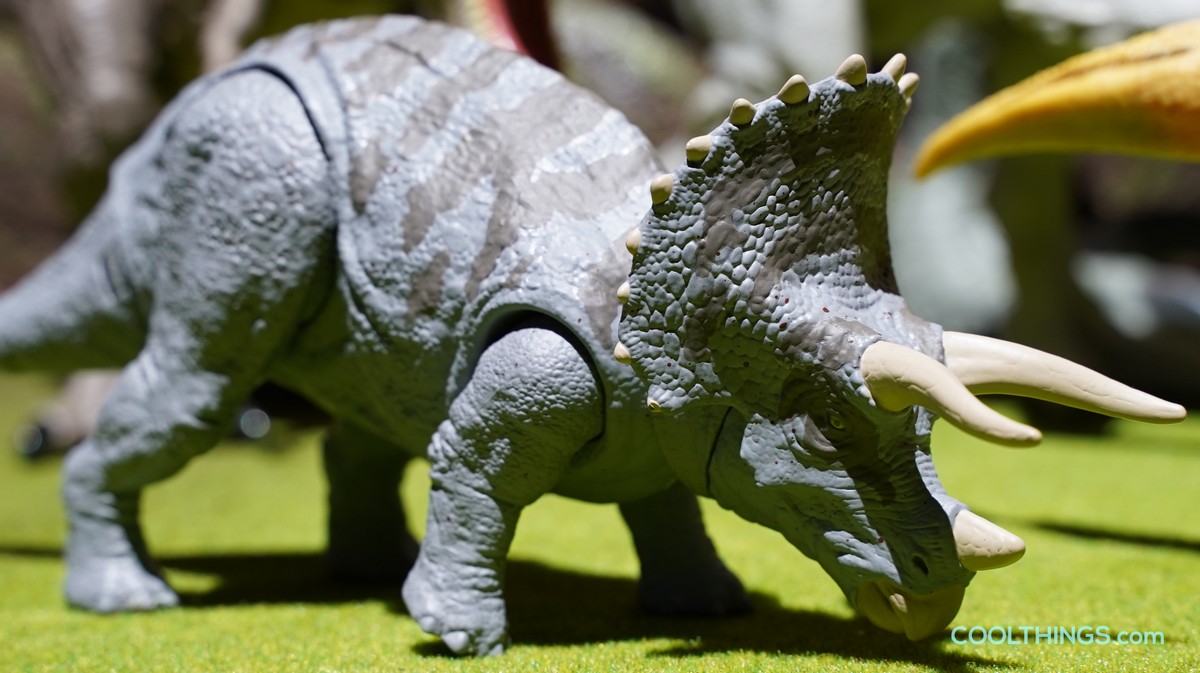 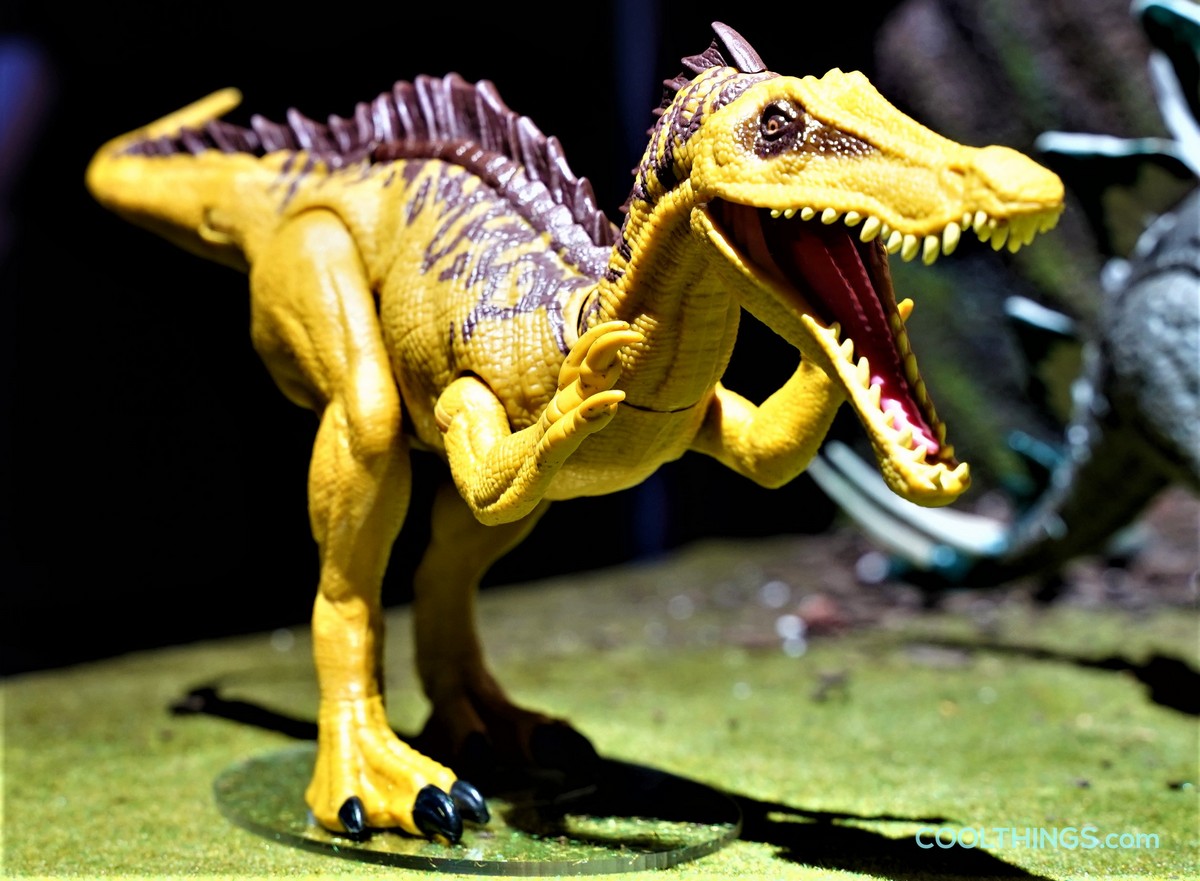 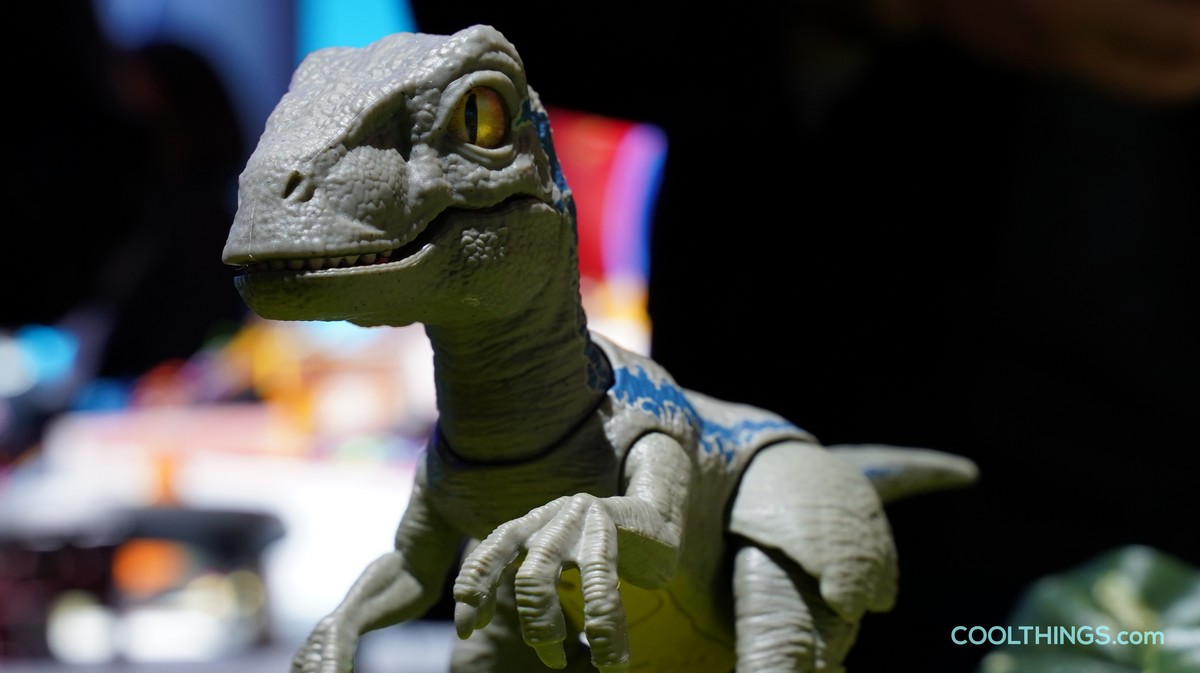 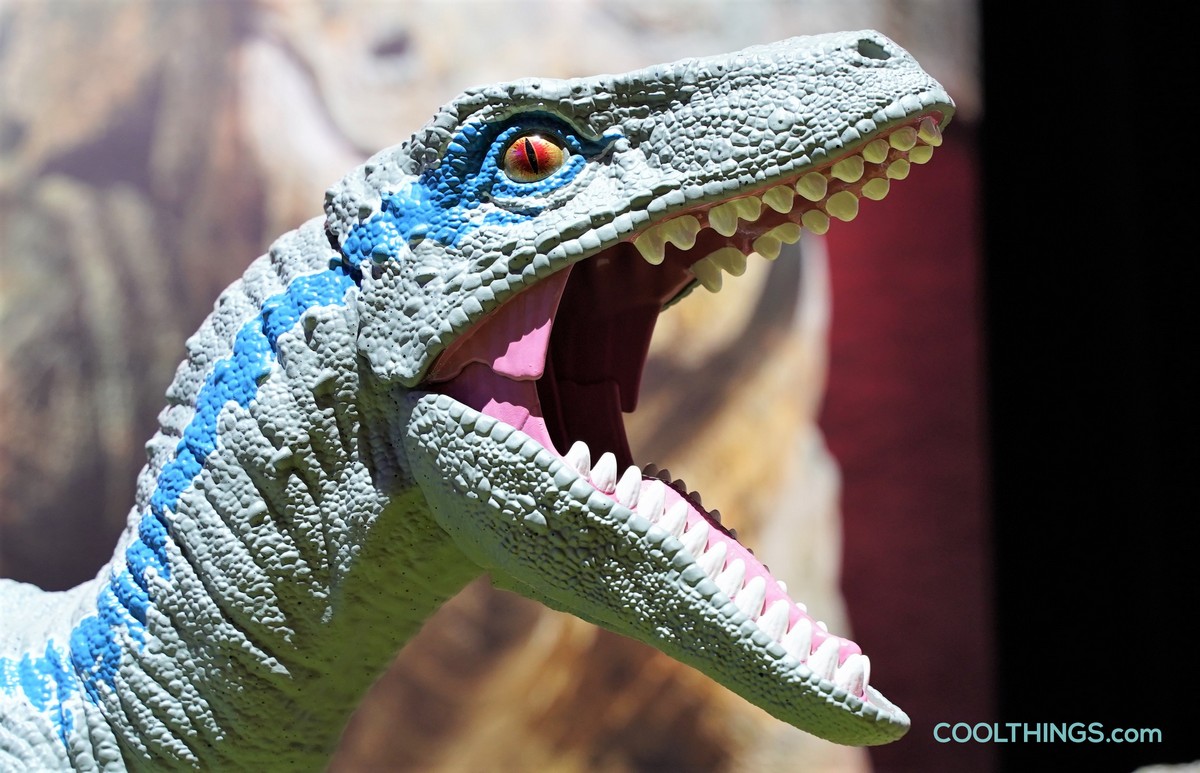