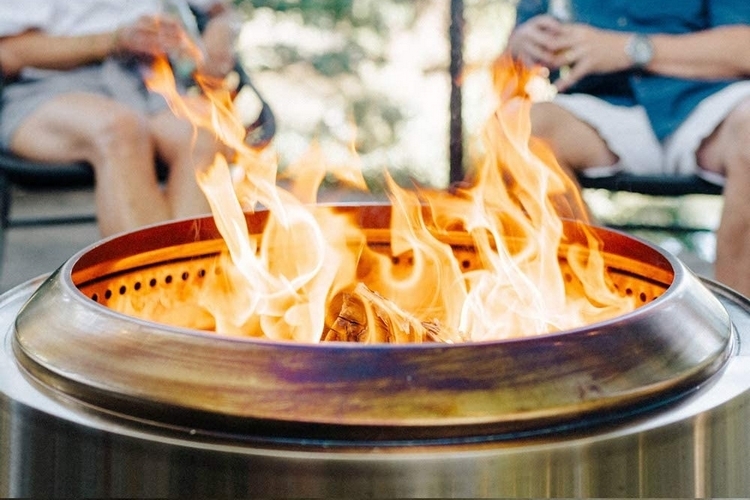 If you live anywhere with relatively chilly weather for much of the year, a fire pit is an absolute backyard necessity. Few things can make the outdoor area of your home more conducive for relaxing after a long, grueling day than a warm and crackling fire.

While there are plenty of options for backyard fire pits, we highly recommend going with portable options instead. You know, the kind you can use in the backyard as a regular fixture, all while being easy enough to pack up and stash in the car for campfire use while camping on the weekend. It’s just way more convenient, not to mention more versatile, compared to building a permanent fire pit from scratch or installing one of those large, pre-made backyard units.

Here are some of our favorite choices in portable fire pits. 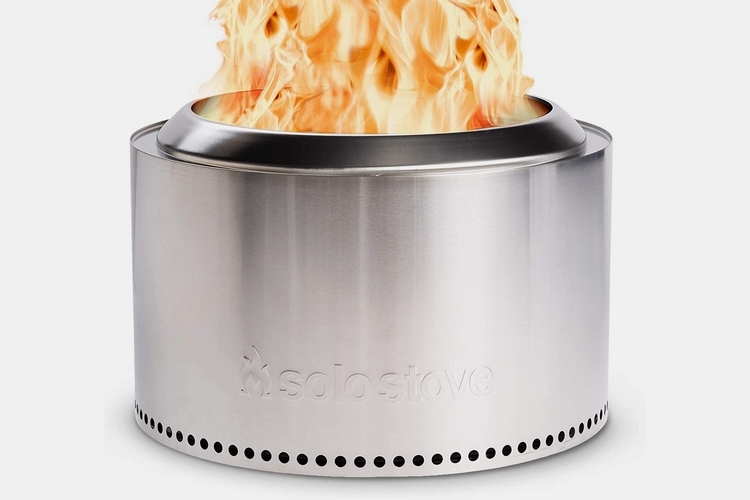 To those unfamiliar with Solo Stove, they make double-wall fire pits with bottom vent holes that allow air through to constantly feed the flames, while the gap between the walls takes any unused oxygen and feeds it back to the fire. This creates a highly-efficient burn with little to no smoke that scorches every inch of fuel you have sitting in the pit. It, pretty much, set the bar for modern portable fire pits, gaining an avid base of enthusiastic fans along way.

The Yukon is their biggest offering, measuring a whopping 27 inches in diameter, making it large enough to accommodate full-size logs. It burns fast, giving you a full blaze in just a little over five minutes, all while maintaining a large enough fire that can keep a big group warm (the outfit says they designed it for 10-person use). While it’s not the most packable or portable (it weighs 38 pounds), it’s quite a reasonable size for car camping, all while being just the right size for keeping the backyard toasty. In case this one’s too big for your needs, you can opt for the smaller 19.5-inch Bonfire model. 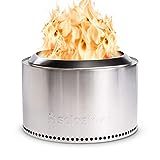 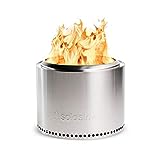 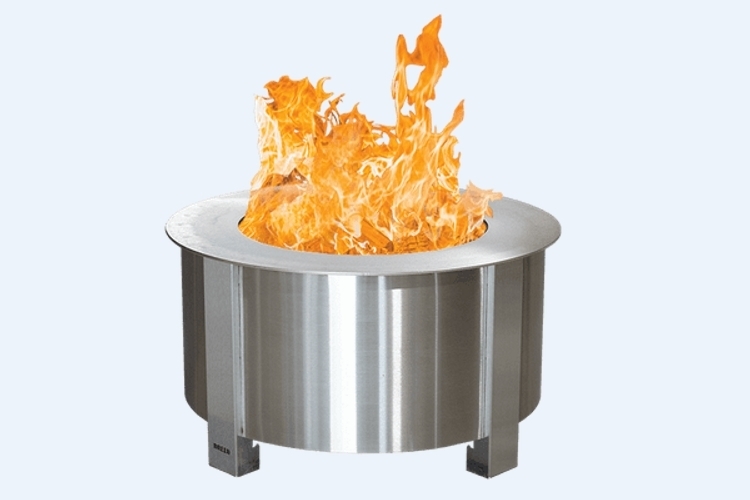 An American-made fire pit, the X Series 24 is built to hold up to rugged use with its 304 stainless steel construction, the same material they use for industrial-grade kitchens. It looks the part, too, with every exposed surface giving the impression of a really robust build, although the heavy-duty construction does take its toll in the heft, as this thing weighs a very substantial 62 pounds. Yeah, you’ll want to have someone help you load this in the car.

It has its own airflow system designed to maximize burn, while generating even less smoke than the Yukon. Do note, it doesn’t quite get a fire going as easily or as quickly as Solo Stove’s offerings, although it does maintain a consistently raging blaze as soon as builds up its fire.

The pit itself measures 27.5 inches in diameter, so it’s only slightly bigger than the Yukon. If you want to get the most out of the pit, you should definitely get the optional sear plate accessory, which adds a griddle around the entire edge of the pit, allowing you to conveniently heat water, toast bread, and cook sausages while gathering around the fire, although it does increase the total diameter to over 29 inches. With that said, the griddle is absolutely worth the extra size and weight. 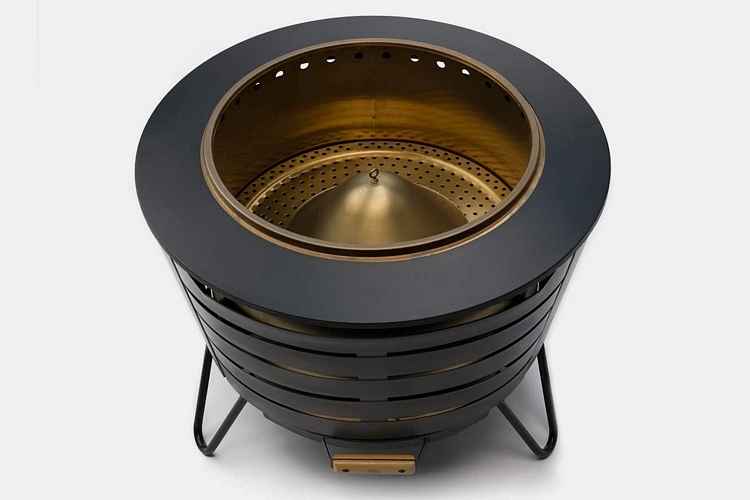 We consider this to be the best-looking of the fire pits in our list, making Tiki’s 25-inch fire pit a good choice for homeowners who want to raise their backyard’s aesthetics, on top of making it a toastier space.  While it’s not the most durable in the list, the 16-gauge stainless steel construction and weatherproof powder-coating should be good enough to hold up to backyard parties and camping adventures alike, while keeping it at a reasonably manageable weight of 45 pounds.

The pit itself measures just 16 inches in diameter, with the rest of the structure helping to facilitate the internal airflow system that allows it to burn through fuel efficiently while producing very little smoke. It can take regular logs like any fire pit, although the outfit recommends using their own brand of easy-to-ignite wood pellets, which they sell in packs that are guaranteed to burn for 30 minutes each. From our experience, it can get a fire going almost as quickly as the Yukon even when used with traditional firewood, so the fire pit works with either type of fuel. As a bonus, the ash tray is removable, making cleanup an absolute breeze. 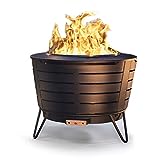 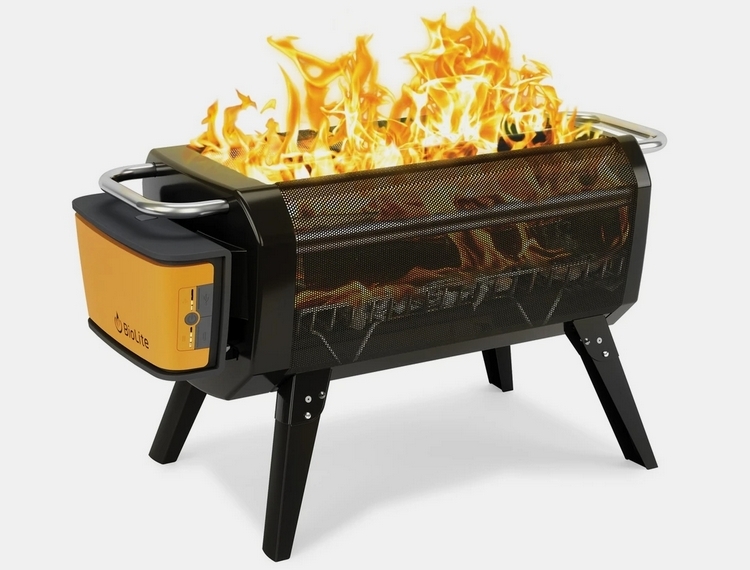 Unlike all the three previous fire pits, BioLite’s FirePit+ comes in a rectangular box form factor that’s held up on four legs, so your fire is elevated well above the ground. Instead of coming with an all-natural airflow system, it uses a battery-powered fan that strategically drives air into the fire, creating a uniform temperature that dramatically improves combustion. As a result, the whole thing gets a heavy burn going in just 10 minutes, while staying nearly smoke-free the whole time.

It has a fuel rack that goes down to the bottom when used as a fire pit, although you can also raise it at a higher position when you want to burn charcoal instead for grilling.  Simply set down the optional grates on top when you want to start cooking those steaks and burgers.

Because it relies on a fan to create efficient airflow into the fire, you’ll need to keep the battery charged if you want to get a good, smokeless fire going. According to the outfit, the battery can run it up to 30 hours at the low fan setting, 14 hours on medium, and seven hours on high, so you’ll want to have some power source on hand if you’re taking this camping. On that note, it’s a great camping fire pit, with its foldable legs, reasonably compact dimensions, and light weight of 19.8 pounds. 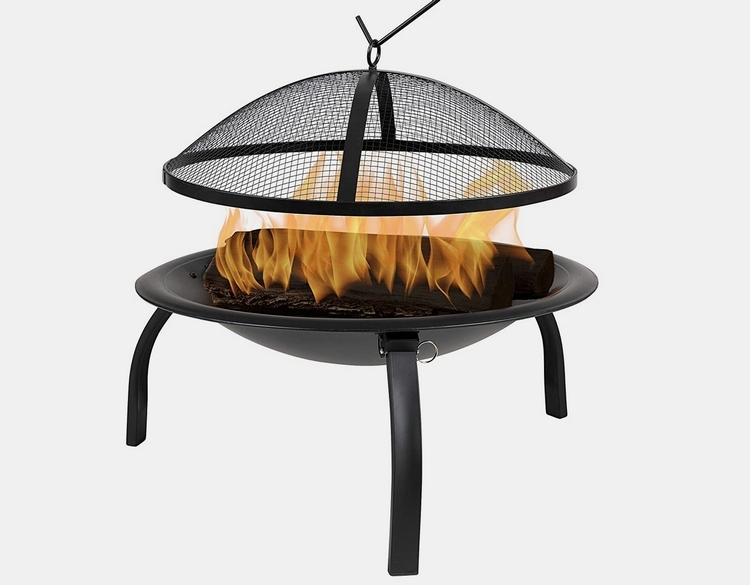 If you’re looking at those fire pits and find yourself shaking your head at the admittedly high ticket prices, we can’t really blame you. A thorough burn and nearly smoke-free fire does cost a fair bit of premium. In case you just need something more conventional without the fancy modern features like a smoke-free burn and a stainless steel build, this foldable option from Flash Furniture should make a decent pick.

It has a 24-inch diameter tray for burning all your fuel, as well as a mesh lid that you can put on top to keep the sparks from spreading all over. Foldable legs also allow you to collapse into a really compact bundle for easy portability, making it the most portable of the options in our list. 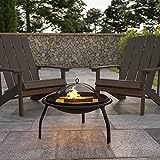