Key-Shaped Pocket Knife Adds A Utility Blade In Your Keychain 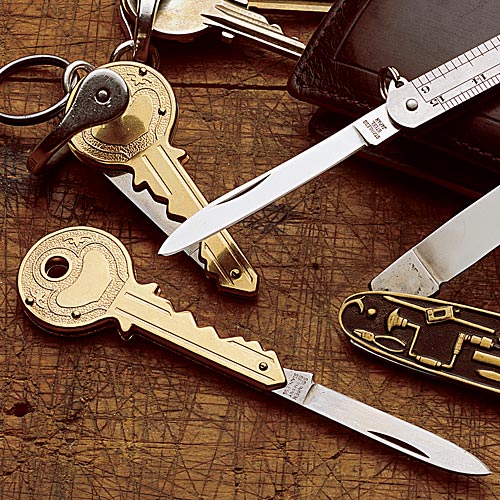 Want a small, concealed blade, but can’t stand a full-featured, bulky Swiss Knife in your pocket?  The Key-Shaped Pocket Knife is just as the name implies – a small key with a tiny flip-out blade hidden around the side.

While it isn’t exactly the kind of blade that will make muggers quiver in fear, the Key-Shaped Pocket Knife should prove handy for many other uses.  From opening up packages to pulling out a stub on your finger, this miniature slicer should do the job.  You can even puncture rag dolls, if that floats your boat, on your way to becoming the next media-celebrated serial killer, all without giving yourself away.

Measuring no larger than a regular key, the German-made pocketknife is designed to hook handily on a key ring, looking none out of place in your Spongebob keychain.  Unless you look, that is, and notice that it’s just a tad thicker than a standard key, with a blade slotted on a gap along the edge.  It looks just a tad more handsome than your regular pen knife, too.

I’ve never been a big fan of thumb-sized stabbers.  I mean, why not just carry a real three-inch blade  in your underwear and be done with it?  Still, the thing is cute as hell and absolutely catches everyone off-guard.  What thug would think you can puncture them with a sharp tool when all you’ve got on your hand is a harmless-looking wad of keys?

The Key-Shaped Pocket Knife is available for $24.90 apiece, with a set of three selling for $59.95. It does make for a cool gift also.