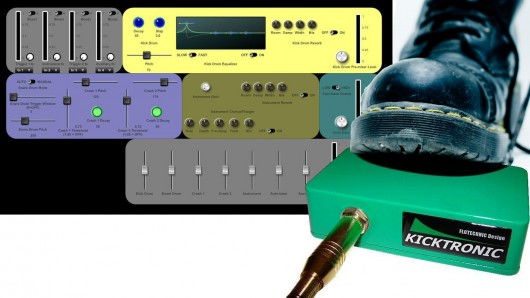 One man bands aren’t entirely rare in this day and age.  With loopers, sequencers and other musical automatons on tap, standing solo on stage while having full accompaniment is perfectly doable.  Here’s another option for band-averse musicians desiring a rhythm section: the Kicktronic.

Created by Flotechnic, the setup consists of a PC-based software and a box sensor that you place on the floor.  You can use two of the rigs at a time, allowing you to involve both your feet when creating your backup sound on the fly.  To use it, you plug both the sensor (or sensors, if you’re using two) and your main instrument into the PC, then run the software.  And off you go.

The Kicktronic is described as a virtual band system that claims to deliver a more natural accompaniment than the pre-recorded digital backing that’s frequently employed during solo play.   The default sound you get is a bass drum, which you can play by tapping on the foot sensor like it was a kick pedal.  For a thicker sound, you can also employ an auto-bass  (an auto-generated bass line that plays off on whatever note you’re playing on the main instrument and the rhythm of your foot taps), a snare drum (can be auto-generated or controlled by a second pedal) and crash cymbals (generated by tapping harder on the foot sensor).

Bass drum sound is generated using analog modeling technology, rather than sample triggers, making it sound a whole lot more organic than your usual digitized options.   It offers a whole heaping of parameters to tweak each instrument, too, allowing you a great deal of room to customize your “backing band.”

Price for the Kicktronic is €39.99 for the software with one foot sensor and €69.99 for a set with two of the stomp boxes.  It’s available directly from the Flotechnic website.