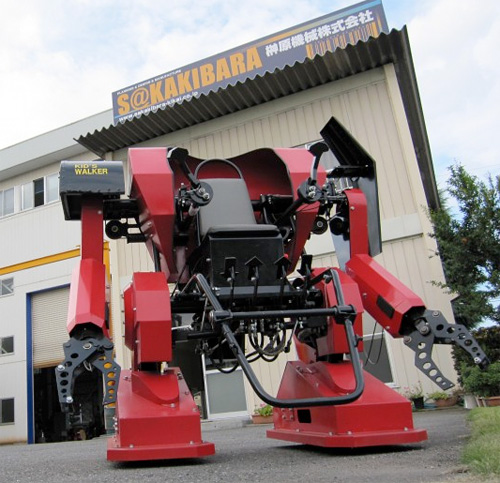 Six years ago, a Japanese company produced an awesome bi-pedal personal robot suit  called the Land Walker.  Since it was a functional mech that you can operate, they restricted it for use by adults who can be blamed in case things went terribly wrong.  This year, they produced a safer, but no less awesome, version for the younger set: the Kid’s Walker.

Created by Sakakibara Kikai, kids can hop into the pilot seat and operate the exoskeleton all by their lonesome.  Safety measures  were implemented to make sure accidents are avoided, including restricting the walking motion (it shuffles slightly forward instead of actually taking steps) and loosening the maximum grip of the claw.

The Kid’s Walker stands 5.25 feet tall and weighs just under 400 lbs, about half the numbers for the original Land Walker, making it easier for youngsters to manage.  All controls for the feet, arms and claws are available right from the pilot’s cockpit.

Just like the bigger version, it’s designed as an amusement ride and is available as a rental for events.  There are no plans of selling them for home use, although Sakakibara Kikai estimates that one would probably cost around $21,000 if they ever went into production.

Personally, I think it’s sad we live in a world where children cannot ride monstrous piles of exoskeletons to school.  I mean, imagine the joy you will feel if Santa brought you this for Christmas when you were ten years old.  Heck, imagine how you would feel if you got one like this when you’re 30.   It’s like a dream come true.