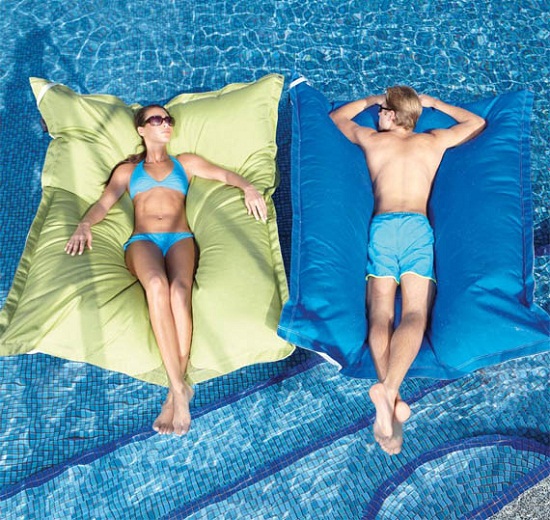 Plopping down on a giant beanbag pillow is always good for relaxing.  So is chilling out in the pool.  And you can do both at the same time with the King Kai Pool Float.

Unlike regular pool floats, this one is made with foam beads — just like those form-hugging beanbags you still keep in the basement.  Because of that, it doesn’t sit stiff, adjusting to fit your form and giving you one heck of a comfy surface for those hot, sunny afternoons.

The King Kai Pool Float is a water-treading pillow filled with buoyant versions of the body-hugging stuff they fill up your Fatboy Metahlowski with.  Body is decked in sunbrella canvas, a stain- and mold-resistant material that keeps cool even after an entire day of lounging in the sun.  It comes with an easy-access drain for quickly drying once you’re off the pool, along with a built-in strap and water-proof grommets for tying off when not in use.

Measuring 60 x 75 inches, it can squeeze up to two skinny people, keeping them afloat while they relax in peaceful slumber at the local dumpster pool.  And when you’re done with the water, you can fish it out onto solid ground and haul it to the living room for a round on the Xbox 360.  Yep, it can work as a regular beanbag, too.

Made by Brookstone, the King Kai Pool Float might be a little pricier than those plastic inflatables you’re used.  But it’s a two-person beanbag and float in one, which should adequately make the case for the $249.95 price.