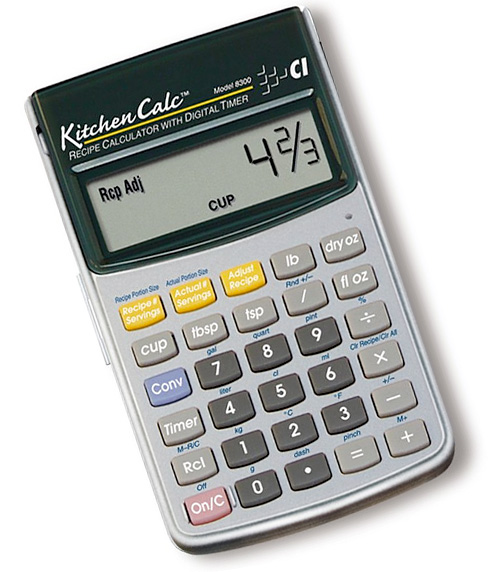 Recipes are awesome – follow them to the letter and you can whip up a decent-tasting meal without having a single iota of cooking talent.  Problem is, rarely can you follow a recipe down to the strictest detail, often requiring that you scale portions up or down.

The Kitchencalc makes the standalone calculator useful again by throwing in features that will help you turn that recipe for four people into an equivalent dinner for two.  Not only that, it comes with a whole host of other kitchen functions that make it a useful bundle of archaic technology for your cooking needs.

There’s an iPhone app for that?  Probably.  How good would you feel about putting your expensive smartphone in the line of fire, though?  With all those sputtering sauces, boiling oil and nasty stuff stuck to your fingers while you’re cooking, it doesn’t sound like the most well-thought-out idea.

Styled like a traditional pocket calculator, the Kitchencalc sports all the conventional buttons that let you perform basic arithmetic operations.  To make it more useful, though, it adds a slew of kitchen-friendly capabilities designed to help you accomplish your food-preparation duties.  Functions include accurately scaling down recipes (based on servings, portions or both) and converting various units that are relevant to cooking (volume, weight and temperature).  There’s even an alarm timer built in so you don’t end up putting the food for either too short or too long over the fire.

Want to cook grub off recipe books and have them taste like the culinary wonders they’re supposed to?  Get the Kitchencalc  for $24.95 and you just might pull it off.