Kite-Powered Sea Quad Lets You Ride Over Sand And Sea 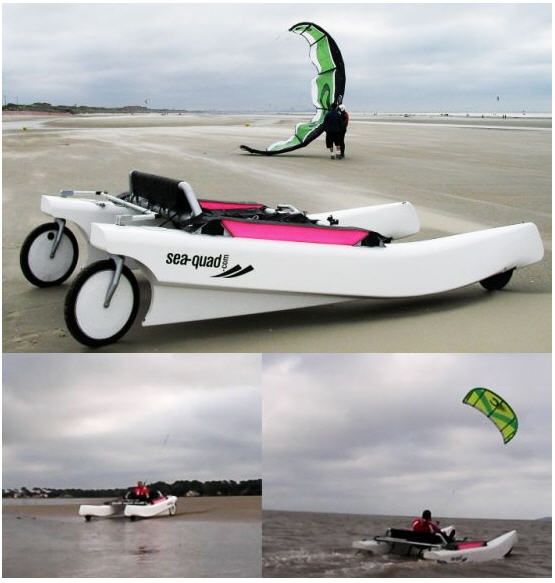 Looking for a few more thrills for your next trip down the beach? Here’s something to look forward to. Called the Sea-Quad, it’s a recreational kite-sailing catamaran with amphibious capabilities, allowing you to cruise both sand and sea.

Weighing a relatively light 105kg, the beach-friendly vehicle uses a large connected kite to pull it into motion as the wind blows across its frame. Driving is controlled by a swing bar to which the kite is attached, allowing you to steer it by pointing the glider in the right direction.

The Sea Quad can hold passengers and cargo up to 180kg, with seating available for two people (yep, you can pick up a hot mermaid along the way and bring her to shore). It sports four wheels (two small ones in front, two larger ones in the rear) for sand travel, along with aluminum and black trampoline tubes and pockets for treading through the water.

Both the pics and videos (available on the official site) look damn good. While it appears to be a little more difficult to maneuver than a jet ski (imagine trying to get a kite to change directions while under strong winds), you can’t beat the amphibious talents, letting you sit on a single ride whether you’re cruising the shore or exploring the water. It’s still under development, though the creators are expecting it to retail for a little under $14,000 when it does hit the market.