Like other great ideas, it started in the field.  Nate Alder was a scuba diver working on his advanced certification in 2006 when he learned that some of his colleagues pumped argon gas into their dry suits for extra insulation during low climates.  The discovery led him to wonder whether the same could be done for skiers and snowboarders who spent the entirety of their sport in the cold.

The result, available just three short years later, is the Klymit NobleTek, an ultralight and hyper-efficient system that insulates outdoor gear by pumping it with noble gases, such as argon, krypton and xenon.  Unlike current wearable heating systems, Klymit-based outerwear does without the bulk, as the insulation is extracted from the very air that you breathe. 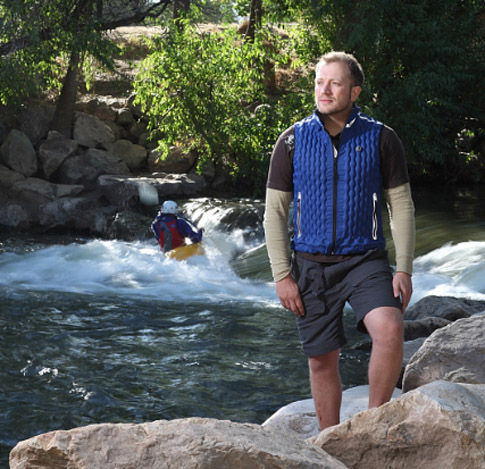 How does it work?  Chambers in the vests keep the body warm the same way gas-treated double-paned windows insulate a building’s interior, basically trapping heat inside your clothes.  According to the company, one layer of argon provides the same insulation as traditional heating fibers that are three times as thick, managing the same effect with less strain on your mobility.

Even better, you can adjust the warmth of the outerwear by simply inflating or deflating it.  A thumb-sized argon canister is connected to a valve in the pocket, which you can use to either pump more gas into the chamber or release it to cool down.

Klymit currently has four warming vest models available, the Kinetic Double Diamond (for snow sports), the Kinetic Red Rock (for hiking and climbing), the Kinetic Chameleon (for hunting) and the Kinetic Amphibian (for water sports).  Apart from their own line, their gas-heating technology has also been licensed to some of the biggest names in outdoor wear, which means you can expect many upcoming outdoor gear to feature the same argon-based insulation.