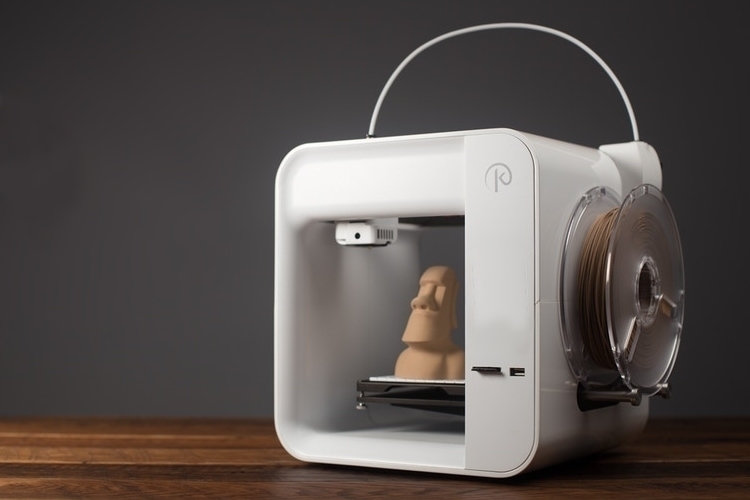 With its ability to let you fabricate real-world objects at the push of a button, it’s easy to imagine 3D printing setting the world on fire. In reality, though, 3D printing remains a relatively small niche, with most desktop units finding their ways into offices, workshops, and schools rather than your average home. With their latest 3D printer, Obsidian, Kodama is hoping to help change that.

According to Kodama, they found most cheap printers on the market a little too complicated to use, making them quite difficult to work with for novice users. Expensive 3D printers, on the other hand, required too much of an initial investment, especially for something that most people wouldn’t consider a must-have in their day-to-day lives. This one, on the other hand, combines accessibility with a very low price.

Despite being a budget 3D printer, the Kodama Obsidian comes fully assembled, so there’s no kit that you’ll have to put together piece by piece. That means, there’s no building process that you’ll most likely mess up, so you get a rig that’s ready to go out of the box. Seriously, just plug the it to an outlet, load the filament, hook it up to a PC, and get cracking. It comes with a build area measuring 4.7 inches on all sides, so you can fabricate reasonably big objects with this thing, while LEDs inside the build area allow you to clearly see what’s going on at any time.

Of course, to get the price down really low, they had to remove plenty of the usual accoutrements of desktop 3D printers. That includes a heated bed, which is essential for printing ABS, nylon, and other types of plastics. As such, you’re stuck with printing using PLA, which, if you’re getting into 3D printing for the first time, should be just perfectly fine. Do note, you can buy a heated build area from Kodama separately, so it’s something you can upgrade to if you ever decide to take your 3D printing projects to the next level.

Aside from the lack of a heated bed, there’s also no onboard touchscreen, so you’ll have to operate the machine via less straightforward means. There’s also no webcam inside the build area, so you won’t be able to check in on your fabrication sessions remotely. Lastly, there’s no way to recover fabrication projects after a power outage, so you’ll have to discard what’s already been created and start out anew. If you can live with those omissions, then this just might be the perfect starter 3D printer for your setup.

As for build quality, Kodama claims their erstwhile affordable printer can crank out objects with the same precision as most $1,000 3D printers. It’s quite the lofty claim, so we’ll have to see a unit in action to actually decide. The printer itself measures 10.6 x 11.4 x 12.2 inches, with a weight of 12.1 pounds.

A Kickstarter campaign is currently running for the Kodama Obsidian. You can reserve a unit for pledges starting at $99.

Let’s take an in-depth look at this budget friendly 3D printer from Kodama to see how different it is from other low-cost 3D printers in the market.

Company Background and Profile – The company Kodama has recently stepped into the world of 3D printer manufacturing. Kodama is based in San Francisco, the research and work for their products take place at their Shanghai research and development office. The manufacturing bit takes place in China in order to keep the costs of the product low. Kodama consists of several experienced professionals some of which have worked for some of the largest brands in the world including Apple, Bosch, and Porsche. Michael Husmann the founder and CEO of Kodamahimself is a former project manager at Apple with years of experience. They are using crowdfunding sources in order to fund their products and make the cheap yet high-quality 3D printing dream of everyone become a reality.

Build Quality and Design of the Obsidian – The build quality of this 3D printer is unlike any other cheap 3D printer on the market.According to Kodama, all the internal and mechanical parts were made under the leadership of an ex Bosch who had ample amount of experience in the field of 3D printing. The quality Control and Electronics were completed with some help from an experienced Singapore based Engineer. The product weighs in at a respectable 5.5kg and comes with the dimensions of 27x29x31cm.

Features – Despite the low price, the device is filled with technology. Even on the mid-range variant, that costs you about 149$, you get an LCD display that displays useful information and allows you to control certain operations of the system. If you opt for a more premium variant, you also get access to features such as a Smart LCD screen powered by Android and a built in camera. On the Obsidian Plus and Deluxe models, you also have access to a power-outage recovery feature. This feature is very useful as most 3D prints take multiple hours to complete and no one likes a print failure at 90% completion. With the Obsidian, if your device accidentally gets disconnected, you can easily resume the printing process by reconnecting it and tapping on resume on the LCD display.

Another feature that sets it apart from all other cheap 3D printers is its custom made extruder head. Thanks to a dual fan setup, you can control the temperature of the heat block and the model that you are printing in a more efficient manner. The nozzle and PTFE tube of this item are connected. This allows for easy replacement of the nozzle as you can replace the nozzle by just loosening up a screw.

Setup and Working – Setting up this 3D printer is a breeze. The Kodama Obsidian is a plug and play device. It requires no complex setup and you can just connect it to your computer whenever you want to use it.

This offering from KODAMA works by making use of Fused Deposition Modelling. This is the most common form of 3D printing. This technology makes use of a thing string of solid material known as afilament for 3D printing. On the side of the printer, you can find a reel that holds the material. The filament from the reel is guided to a heated nozzle that melts it in order to make the required shape. Once melted, the filament can be used to make any shape of your liking by making use of software on your computer. The material solidifies instantly as it forms a layer on the predefined path that is used for printing. Each layer acts as a base for the next layer until the complete 3D printing process is completed. The great thing about this specific 3D printer is that it can be bought with an onboard camera. The onboard camera can record your motion thus allowing you to replicate your work in future if required.

This form of printing makes use of general plastics. However, Kodama allows you to opt for an upgraded heated bed that allows you to print nylon, ABS, and even carbon fiber. This makes the Obsidian a great tool for making prototypes and models with high levels of detail.

Ad-dons and upgrades – Kodama also provides multiple upgrades and Add ons to its users. You can get an Aluminium Heated bed for an extra 40$. For an extra 60$, you can get a three-piece casing for your printer that makes it much safer and rugged.

The base version of Obsidian will set you back 99$ and it comes with just a basic set of features that allow it to produce 3D prints.

The plus package priced in at 149$ adds 400g of thefilament to the package, USB/SD slot and includes an LCD screen for controlling different operations of the printer as well.

The deluxe package is where the things get interesting, for a mere 249$, you get a ton of features never before seen in a 3D printer in this price range. It packs a camera that can record your actions and this allows you to replicate your models if required in the future. You also get a heated bed and an android/IOS application with this package. The most interesting feature in this package is the smart LCD. The smart LCD measures in at about 3.5in and support capacitive touch. A Quad Core arm processor and 2GB of Ram power it.The OS powering the display is Android. This allows for fast operation of the display, real time monitoring and control via companion application.

Are cheap 3D printers like this worth a go?

In recent years, 3D printers have evolved quite a bit. They have reached a point at which they are stable for usage even in homes for small projects. Just a few years back, you could only find these premium features in 3D printers worth thousands of dollars, now you can find such features in a printer that starts at just 99$. It is amazing to see how much the manufacturer has been able to cram into such a tiny and budget friendly package.

Manufacturers like Kodama areraising the bar for affordable 3D printers higher with each new product of theirs. Thanks to technological advancements,there are new 3D printers coming out every day. This results in a healthy competition that is great for consumers as they get more choice and better products as competitors try to one up each other by offering many unique features. The low price point of these 3D printers is attracting more and more people to the world of 3D printing. The Kodama Obsidian manages to balance price and performance quite well unlike most other low-cost 3D printers available nowadays. The plug and play nature of the Obsidian is another key selling feature that makes it a great buy for beginners.This device is a great starting and testing ground for people who want to experience 3D printing. Those who want more can opt for the more premium variants of the Obsidian as well. The Kodama Obsidian offers something for everyone.