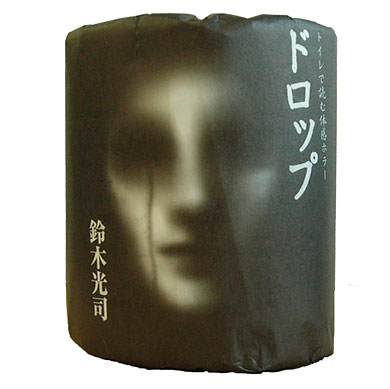 Like to read during toilet hour? Then you’ll love “Drop,” a nine-chapter novella printed across an entire roll of toilet paper strictly for your perusal while performing…errr…relief duties.

Written by Koji Suzuki, the same Japanese horror writer behind the hugely successful “The Ring,” the novel is a second-person narrative (yes, it puts the reader as a central character) that tells the tale of a goblin who lives inside the walls of a public restroom. That’s definitely one way to spook a reader – cast the story in the same setting that they’re certain to be in while they’re reading your work. 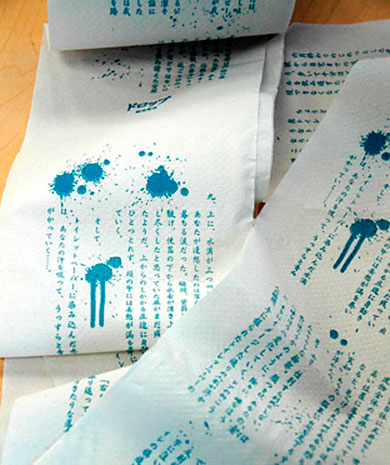 All nine chapters of the “book” are printed on continuous sheets, which means you can finish the entire piece of fiction by simply unrolling sheet by sheet. It’s printed several times across each roll (not sure how many) so you can “wipe down” with an entire novel and still leave the next bathroom customer with the full tale to enjoy. You can also just cut off the sheet right before the ending if you want to ruin the story for whoever’s coming in next.

If you’re conscientious about using that much toilet paper (everybody’s at least a little green now, you know), you can buy your own sheet and carry it around so you can pick up where you left off (basically, reading only what you’ll wipe with). Priced at the equivalent of $2 a roll, it’s not such a shabby deal. After you’re done, you can just give the remaining sheets (and copies of the story) to whoever else wants to freak themselves out while sitting on the toilet.

Manufactured by the Hayashi Paper Company, Koji Suzuki’s “Drop” is only printed in Japanese at the moment, with no plans from anyone else in the world to replicate the deed. When I first heard the term “disposable books,” this is absolutely not what I imagined. [via The New York Times]