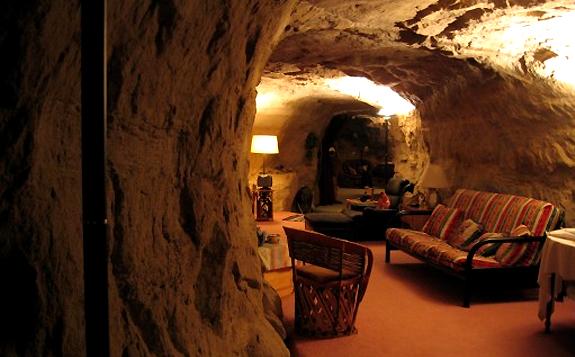 Like taking off for the weekend, and spending time in an out-of-the-way bed and breakfast facility?  Kokopeli’s Cave Bed & Breakfast takes out-of-the-way to another level, renting you a fully-furnished cave out in the wild for your weekend getaway.

Located north of Farmington, New Mexico, the uniquely-themed dwelling gives you the Fred and Wilma experience, reinforced with some of our familiar modern luxuries.  You know, like a fridge, a microwave, hot and cold water, a washer and dryer, and a TV (with two channels).  Naturally, there’s plenty of sight-seeing too, as the cave and cliff tops give you a unique view of various mountain sceneries. 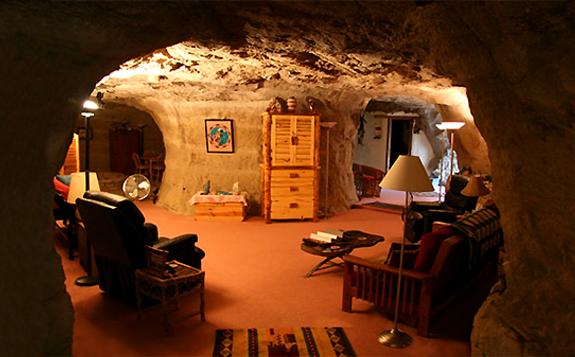 Kokopelli’s Cave Bed & Breakfast consists of one 1,650-foot cave that’s been carved into a  65-million-year-old slab of sandstone that stands 280 feet above the La Plata River.   It’s not a natural cave  – they blasted, drilled and excavated the damn thing in order to build a habitable area 70 feet below the surface.  They reportedly started working on it in the 1980s and eventually declared it ready for occupation in 1996. 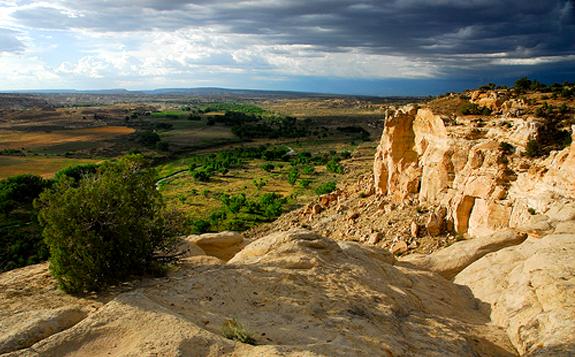 Aside from the modern amenities mentioned above, the one-bedroom lair comes complete with plush carpeting, Southwestern-style furniture and accents, a cascading waterfall shower and a flagstone hot tub.  While the cave is comfy, the way there isn’t: you’ll have to hike down a sloping path on the side of a cliff, with a distance equivalent to walking down the stairs of a seven-story building.

According to the owners, the cave was originally meant to house the office of a consulting geologist named Bruce Black.  Yes, we suspect he just wanted to play Batman, too.   You can make your reservations with Kokopeli’s Cave Bed & Breakfast from the link below.