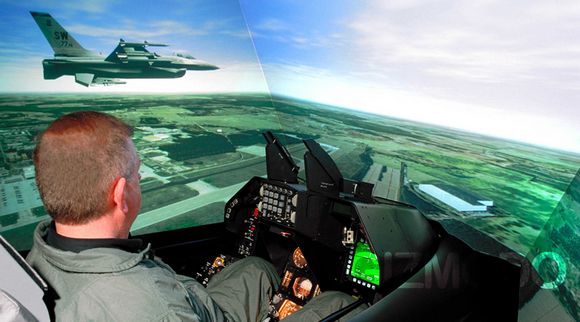 Want to have the most realistic flight simulator setup money can buy?  Take a gander at the Simusphere, an ultra-high-definition F-16 simulator running on a backbone of 120 Intel Dual Core machines, each one fitted with off-the-shelf $400 graphic cards.  The resulting images are then showed off on nine high-resolution projectors, arranged to display the visuals in a 180-degree field of view.

It’s the flight sim to trump all other computer-aided flying rigs, providing a 20-40 acuity – just a short ways from a perfect 20-20 vision, which defense contractor L-3 Link says isn’t possible with current projector technology.  Using a proprietary physics-based environment generator software, those 120 networked PCs are put to good use, rendering the most complex and accurate cockpit simulator available to man.

Using the setup, fighter pilots are able to put themselves through the most realistic remake of real-life combat conditions, with over 30,000 simultaneous entities on the screen at the same time.  Unlike anything before it, pilots on the helm can spot potential targets from many miles away, making out details the same way they would be able to during real missions.  It even comes with a special night mode that renders the surrounding visuals as dark as they would be in real unlighted conditions, requiring the pilots to use night-vision goggles to make out anything on the screen.

L-3 Link spent a total of $15 million to develop the Simusphere F-16 simulator, which they are now showing off to potential customers.  Armchair pilots with the kind of budget that can feed an entire small town, start giving these guys a call now!