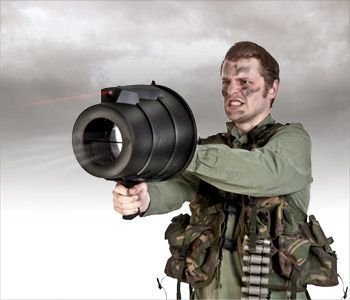 The Airzooka is a pretty nasty piece of novelty gadgetry on its own, puffing a huge wad of air on unsuspecting victims’ faces.  In case you want to guarantee that it does the job even better, the Laser Airzooka adds laser-point targeting to the mix, ensuring that you hit the exact mark you’ve been aiming for.

Created by the same clowns at the iWOOT Armoury (who built the original Airzooka), the new variant continues the valiant tradition of its targeting-less predecessor.  It sports the same bucket-shaped design that blows a high-velocity surge of air, powerful enough to send your cubicle neighbor’s hairpiece taking off into a ridiculous flight.  With the new laser-targeting system, you’ll be doing it with a piercing aim – allowing you to blow the load on the very object of your disdain.

The “soft” weapon includes a spring-fire quick-release mechanism and Class I laser targeting sight (that can blind your targets, so don’t shine it in their eyes), combining to fire focused balls of air that feels like a hurricane slapped you in the face.  It sports 34 x 27 x 27 cm dimensions and works with two AA batteries.

Ready to wage face-blowing battles?  We found some deals for you on the Laser Airzooka.