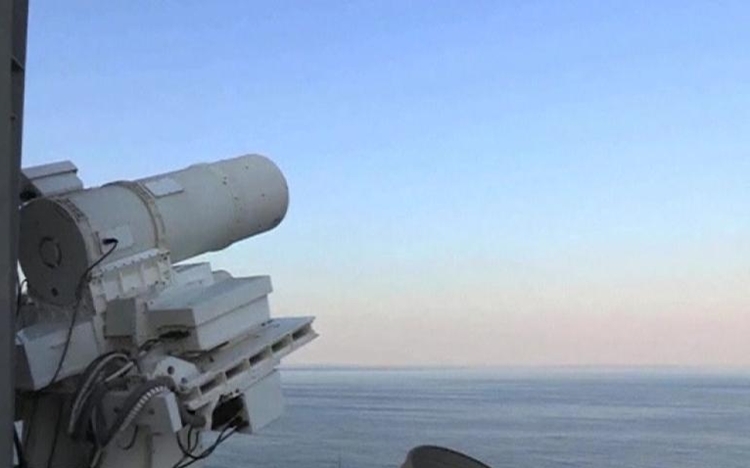 If you’re a supervillain bent on wreaking havoc in your local metropolis, we can’t imagine a nastier weapon to have in your arsenal than this Laser Weapon System (LaWS) currently being tested by the Office of Naval Research. Forget the shockwave cannons, virtual minefields, and whatever puny laser ammunitions you’re currently geeking out over – only supervillains that terrorize the city with giant weaponized lasers truly deserve their place under the sun.

This isn’t just a prototype that’s still being put together, either. Instead, it’s a working example that’s been tested successfully aboard the USS Ponce, which is currently deployed in the Arabian Gulf. I mean, just look at this crazy video of the darn thing taking out two ships.

During the tests, the Laser Weapon System performed flawlessly, taking out targets both airborne (unmanned UAVs) and on the water (small boats) in instantaneous fashion. Even better, adverse weather conditions didn’t hamper the weapon’s performance, destroying targets with the same lethal effectiveness each time out. Oh yeah, the whole thing is operated using a device that looks eerily similar to a PS4 controller, so we’re not just getting video game weapons, it’s, practically, used like a video game, too.

In a statement, chief of naval research Adm. Matthew L. Klunder says that laser-based weapons like this one are “powerful, affordable, and will play a vital role in the future of naval combat operations.” That’s right, we’ll be seeing more of these laser cannons that look like they came straight out of science fiction blasting objects with impunity in our immediate futures.  Life is awesome.

The Laser Weapon System tested on the video is a 30-kilowatt pipe of destruction, with larger 100- and 150-kilowatt versions scheduled to be built and deployed aboard ships later.